The candlestick chart is perhaps the most popular chart used by traders all over the world. But have you wondered whether candlestick patterns really have quantifiable predictive value?

Yes, some candlestick patterns have been demonstrated to work pretty well and may even be improved by combining them with some trend filters.

What are candlestick patterns?

Candlestick patterns are identifiable shapes formed by a single candlestick or group of candlesticks. Each candlestick represents a trading session, and it is often colored to indicate how the price closed during that session. While traders can use any color combination, green or white is generally used to represent a session where the price closed higher than its opening price. Red or black color, on the other hand, is used to represent a session that closed lower.

Thus, most traders prefer the candlestick chart because it offers clear price information that is easy to interpret. Interestingly, the shape of some individual candlesticks or a group of candlesticks may show who (bulls or bears) is dominating. There are many such candlestick patterns, but the most common ones are the hammer / shooting star, engulfing patterns, morning /evening stars, piercing/dark cloud cover, tweezers, harami, and hikkake.

But how reliable are they?

How to test the candlestick patterns

To quantitatively test candlesticks, there must be clear rules for defining the candlestick patterns that form the entry setups. There should also be an exit rule. For the candlestick patterns, the common definitions are already on the internet. Anything can be the exit rule, but for the test result that we are about to show you, the exit rule is to sell on short-term strength when today’s close is higher than yesterday’s high.

Twenty-three patterns were tested on the SPY ETF, which tracks the S&P 500 Index, from its inception in 1993 until the end of November 2020. Although some of the patterns are known to be bearish formations, they test all formations by buying, not selling/shorting. While some patterns produced many signals, others showed only a few signals.

Here’s the summary of the results in this table:

Choosing only the patterns that have a higher profit factor than 1.5, there would be only 12 patterns to trade. The compounded result from trading only those patterns would be as follows:

The only negative year would have been 1994, while the total time spent in the market would be 47%. The year 2020, with almost 41% return from 40 trades, would have been the best. On the other hand, during these years, buy and hold would have given 9.9% during.

Not considering commissions and slippage, the equity curve would look like this: 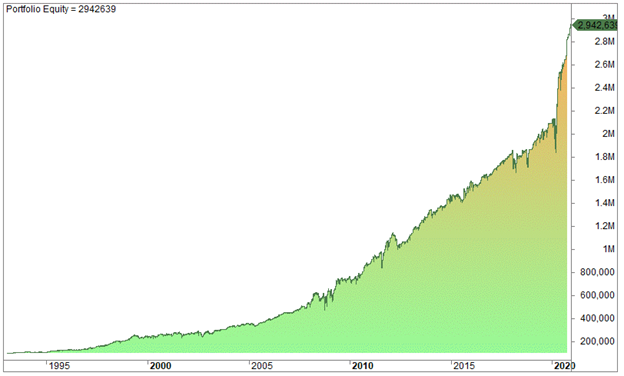 Testing those 12 candlesticks patterns (with a profit factor above 1.5) on other ETFs, the results looked like this:

You may use a filter to improve the results of candlestick pattern trading. Here are some examples of filters you can use:

Do Candlesticks Pattern Work? Are They Reliable? A Quantitative Backtest Of 23 Candlesticks (Trading Strategy)