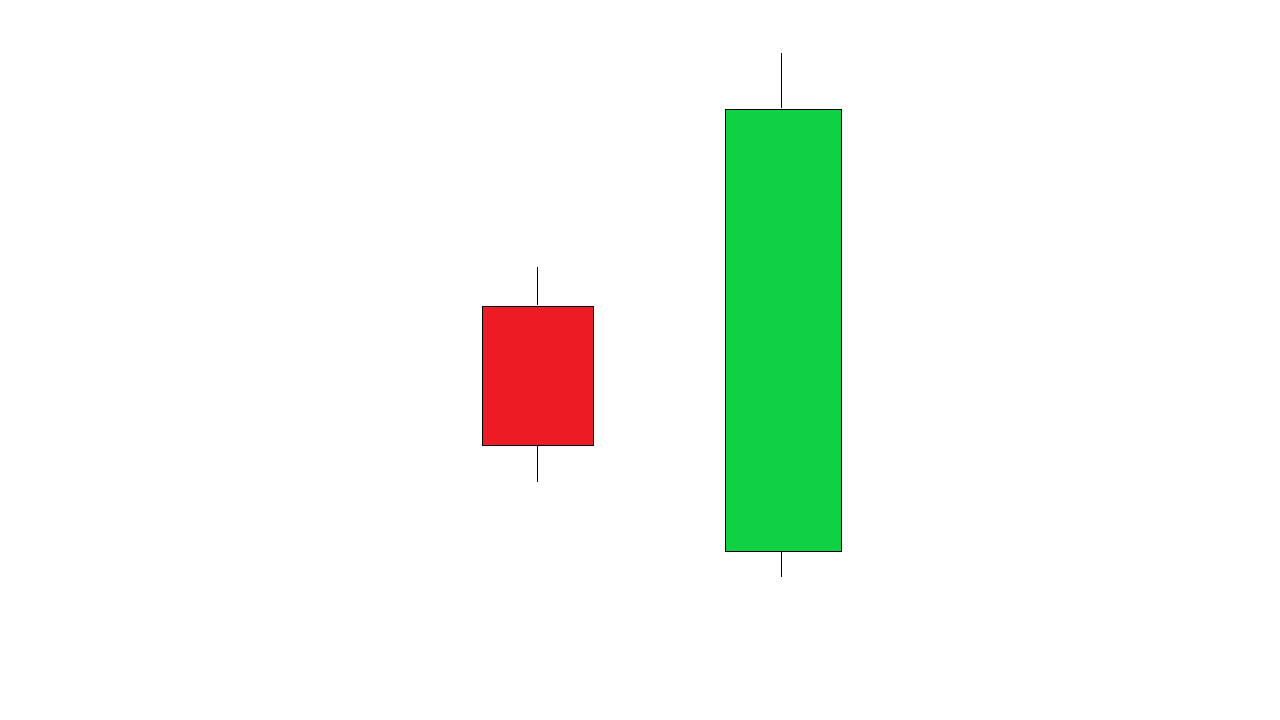 One of the most common ways of charting price is with candlesticks. With their colorful and clear representations of market data, they make it easy to see how the market has moved. When combined together, they create candlestick patterns, and one such pattern is bullish engulfing.

A bullish engulfing is a two-candle reversal candlestick pattern that usually forms after a bearish trend, and signals that a bullish trend has been initiated. As to its appearance, the first bar of the bullish engulfing pattern is bearish and is followed by a bullish candle, which body completely engulfs the first bearish candle.

In this article, we’re going to have a closer look at the bullish engulfing pattern, what it means, how you identify it, and some example trading strategies.

Note that the discussion below is theoretical, and assumes that the traditional view of the bullish engulfing pattern is correct.

How to Identify a Bullish Engulfing Pattern 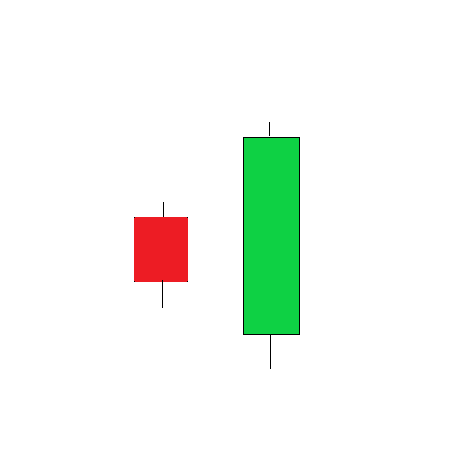 Since a bullish engulfing is a reversal pattern, it’s most logical to look for the pattern after the market has gone down for a while. Then there is a bearish trend to turn around, which isn’t the case if the market is making new highs as the pattern is formed.

This is how you identify a bullish engulfing candlestick pattern:

When a bullish engulfing is formed, it tells us that the bulls finally won the fight with the bears. Let’s break down the pattern to make it a little clearer.

When the first bearish candle of the pattern is formed during the downtrend, it seems like the bears continue to be in control, and as the market gaps down on the open of the next candle, nothing seems to have changed.

However, the bulls gain strength and manage not only to push the price higher, but to recover the gap and make the candle close higher than the open of the preceding bearish candle.

In short, what makes the bullish engulfing pattern so strong is that the bullish candle manages to push past the preceding bearish candle, despite having opened with a negative gap.

Here are two real-world examples of the bullish engulfing pattern. 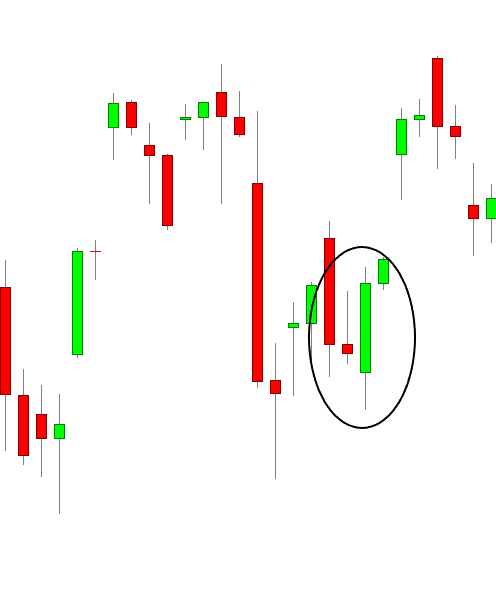 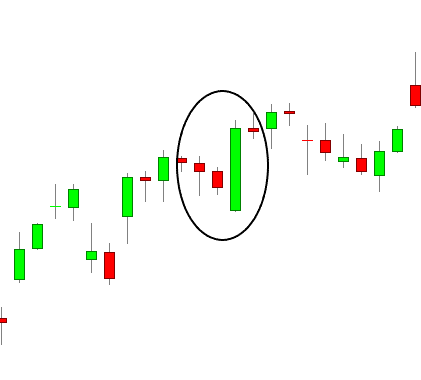 Ways of Enhancing the Accuracy of the Bullish Engulfing Pattern

Many traders say that a bullish engulfing pattern on its own isn’t enough to take a position in the market. They see patterns like the bullish engulfing like a raw market tendency that needs to coupled with more technical analysis to become something they want to trade.

Below we’re going to share with you a couple of ways that you can go about to try to not take a bullish engulfing signal if the odds are not in your favor.

Volume is a great market sentiment indicator that provides additional information about the market. While a price chart shows you what the market has done, the volume shows the conviction behind those moves.

Now, applying the concept of volume to the bullish engulfing pattern could be done in many ways. However, one of the most logical approaches would be to require that the volume for the pattern is higher than the volume of the surrounding bars. High volume shows us that the market performed the bullish engulfing with conviction, which could improve the profitability of the pattern.

Now, you could also compare the volume of the candles that make up the pattern. For example, if the bullish second candle has much greater volume than the first bearish candle, then we could say that the buyers were acting with more conviction than the sellers. And this could very well translate into the pattern becoming more accurate.

2. The Size of the Candles

Another way of trying the improve the pattern is by looking at range. If the range of the two candles that make up the pattern are significantly larger than the surrounding bars, then they get more significant, since they contain more market movement.

Now, you could also compare the two bars inside the pattern to each other. For example, if the range of the bullish candle is significantly bigger than the bearish one, then that’s likely better than if it just engulfs the previous bar by a very small margin.

Sometimes the overall market volatility could have a big impact on the results of a specific pattern. For example, you might want not want to take a trade if the market has been very volatile lately. Volatile markets perform greater swings, and as such, there is a greater chance that they would perform a bullish engulfing by random chance, than in a less volatile environment.

In this section, we wanted to share some strategies that use the bullish engulfing pattern. Now, keep in mind that these are not meant for live trading, but more to show you how you could go about when creating your own profitable trading strategy. Let’s begin!

For a bullish engulfing to be a reversal pattern, it’s quite apparent that it needs to form after a downtrend. Otherwise, there is no trend to turn around!

Now, if we’ve had a bearish trend for some time, it also means that the market with most likelihood is below it’s moving average. And that’s what we try to benefit from with this strategy.

For this strategy, there are two conditions for the entry, and two exit methods.

To enter a trade, we require:

To exit a trade, we either wait for the market to close above its 10-period moving average, or exit after 10-days.

Below you see an example of a trade. The moving average becomes a sort of trailing profit target which exits the trade when the market has swung to the upside. In other words, this is a traditional mean reversion strategy, in the sense that it tries to capture bottoms and sell on the reversion of the trend. 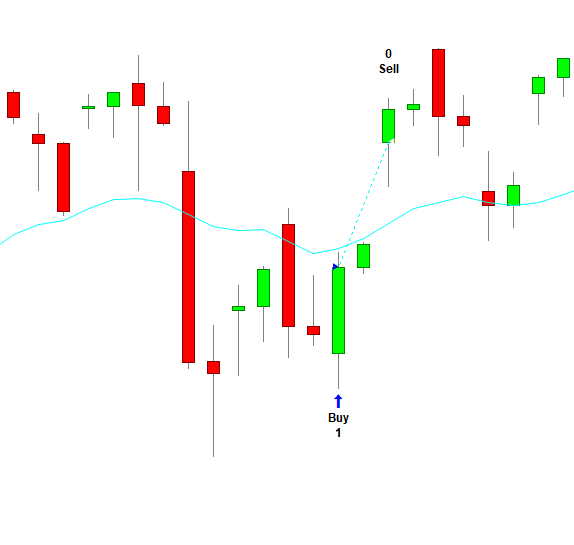 As said, the bullish engulfing pattern is a reversal pattern. However, that doesn’t keep it from appearing when the trend is strong to the upside or in other conditions.

If we want to limit the bullish engulfing signals we take, we need to do so by having some sort of filter that shows us that the market has gone down. And one such filter which often works very well, is the RSI indicator

In this strategy example, we require the 5-period RSI to be below 50. This ensures that the market has entered oversold territory once the bullish engulfing is formed.

However, we cannot measure the RSI on the last, bullish bar of the pattern. The reason is that the bullish candle is a sort of confirmation that the trend has reverted, which means that it already has started going up. And once you have positive price action, the RSI reading will surge as well, which will leave us with close to no signals.

In addition to that, it might not be relevant to use the reading from the last bar, since we here are concerned with the market conditions that preceded the pattern.

In order to solve this issue, we take the RSI reading of the previous bar instead.

These are the rules for this strategy. Buy if:

To exit the trade, we use the RSI as well, and get out when it’s above 80.

In this last strategy example, we’re going to use the ADX together with a special range condition to try and improve the accuracy of the signal. We’ll begin by listing the rules:

Now, what this means is that we buy if the volatility level preceding the pattern is quite low. However, we require a significant range expansion on the last bar of the pattern, meaning that the upward drive of the market seems strong and sound.

This time we’ll exit the trade after five bars. 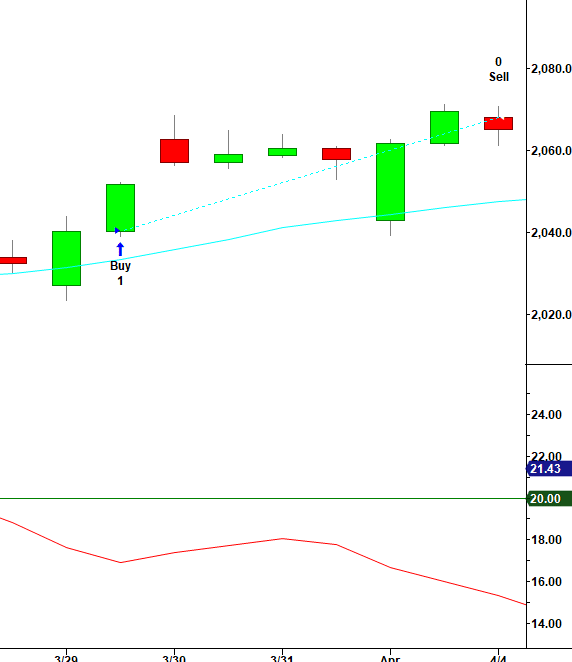 Here you can read more about the bearish engulfing candlestick pattern.

In this article, you’ve learned what a bullish engulfing pattern means and signifies. We’ve also had a closer look at some examples of how you could implement the bullish engulfing pattern in your own trading. Just remember that you always need to test a strategy before you trade it. You can read more about this in our article on backtesting or how to build a strategy.