How to Identify a Bearish Kicker

As we just mentioned, a bearish kicker can form regardless of the trend direction and is a strong bearish signal. To be clear, this means that we expect the price to fall once we spot a bearish kicker in the chart.

This is how you identify a bearish kicker:

What Does a Bearish Kicker Mean?

A bearish kicker tells us a lot about the current market state.

The first bullish candle shows us that the bulls are in control and push the market higher. The bears are absent, and it seems like the market is headed to go higher!

However, when the market opens the next day, it gaps down and even opens below the low of the previous bar. The bears have forcefully pushed the price down, and seem to have come from nowhere.

During the remaining time of the candle, the market heads even lower, which shows us that the control now is with the bears. As such, we’d better follow along, and short the market.

A bearish kicker indeed is a dramatic pattern. It tells a story about a rapid shift in market sentiment that happened quicker than most people had anticipated. As such, it catches many by surprise, and could definitely lead to some panic selling. This in itself could help to make the market head even lower.

Even if a bearish kicker isn’t that concerned with the trend of the market, it tells a slightly different story depending on if you spot it after a downtrend, or an uptrend.

A bearish kicker that’s formed after an uptrend, could be seen as a form of reversal pattern. It tells us that the market is likely to have reached its summit for this time, and is headed for a fall.

In contrast, a bearish kicker that forms after a downtrend instead becomes a sort of continuation pattern. It tells us that the current downtrend most likely isn’t over, and that we could expect the market to perform new lows soon.

Ways of Enhancing the Accuracy of the Bearish Kicker

A bearish kicker on its own might not be enough to take a trade. However, with some additional conditions, you could probably increase the accuracy of the pattern.

Let’s look at some different ways you could go about to improve the winning rate for the bearish kicker!

1. Take the Strength of the Pattern Into Consideration

The bearish kicker pattern is an indication that the bulls have lost the lead to the bears. We went from having a strong bullish candle that showed no sign of weakness, to gapping past the whole range of that bullish bar.

Now, the market typically behaves a little different when there is fear involved. Typically, market participants start to sense an urgency to get out of their positions if they see something ominous.

And a bearish kicker, especially one forming after an uptrend, indeed is an ominous sign if you believe the traditional interpretation of the pattern.

Now, what follows naturally here, is that the fiercer and more conspicuous the pattern is, the more fear it will instill in market participants that sit on long positions. Therefore, we could make the assumption that the more eye-catching a pattern, the more significant it will get.

Considering all this, if the above premise holds true, these would be some things that improve the accuracy of a bearish kicker:

Volume is a great market sentiment indicator. By using volume in your trading, you don’t only see what the market has done, but also its conviction.

If we were to use volume with the bearish kicker, we might want to do it in a way that shows us that many market participants stood behind the pattern. In other words, we could demand that there was higher volume during those two bars that comprise the bearish kicker, than in the surrounding bars.

You could also look at the volume for the two candles separately. For example, if you see that the second bearish candle had higher volume than the first one,  you could assume that the downturn is supported by more market players. Logically, this is something that could strengthen the signal.

In volatile market environments, gaps and large price swings happen quite often. This also extends to the type of swings that make up a bearish kicker.

The natural consequence of this, is that a volatile market environment might produce more false signals than a less volatile one.

To mitigate this potential issue, you could choose to only take a signal if the pattern consists of long candlesticks, and performs a bigger gap. Doing so you might succeed to rule out a couple of those false signals!

Strategies That Use Bearish Kicker (Demonstrational)

In most cases, you cannot trade the bearish kicker pattern on its own. You need to use some sort of confirmation, and make sure to trade it on a market and timeframe that works with the pattern.

That means including some sort of filter, to ensure that you only take a trade when you have an edge!

Below we want to share three strategy examples with you. They aren’t meant for live trading, but to show how you could go about when exploring the markets and building a trading strategy.

Typically, a bearish kicker appears after an up-swing and shows us that the uptrend might have come to an end.

Knowing this, we might want to build a trading strategy that only takes a trade if the market comes from an up-swing, and exclude trades where the market is falling already.

In this example, we’re using the RSI indicator to accomplish this. By requiring that the 2-period RSI is higher than 80, we make sure to only take a trade if the market is entering overbought levels.

Now, since we’re only concerned with the market state before the pattern has been formed, we can’t measure the RSI on the close of the bearish bar. If we did that we wouldn’t get any trades either,  since the last bearish bar of the bearish kicker pattern itself will drag RSI under 80.

To solve this, we instead calculate the RSI from the FIRST bar in the pattern, which is the bullish candle.

So, the rules for this strategy become:

We then hold the trade for 5  days.

As you might remember, we discussed the impact of volatility on the accuracy of the signal. And to continue on that theme, here we’re using the ADX indicator to excludes bearish kickers that form in too volatile markets.

However, exactly as with the RSI strategy, we have to calculate the indicator on the previous bar. The gap and big bearish candlestick that makes up a bearish kicker could easily inflate the ADX reading, and give us too few trades (since we require the ADX to be low).

Here are the rules for this strategy. We enter a trade if:

Let’s round off this list with a strategy that uses a different exit. We’ll use a trailing stop, consisting of moving average, in an attempt to lock in profits as the market heads lower.

Here are the rules:

And then we exit the trade as soon as the market closes above its 10-period moving average. 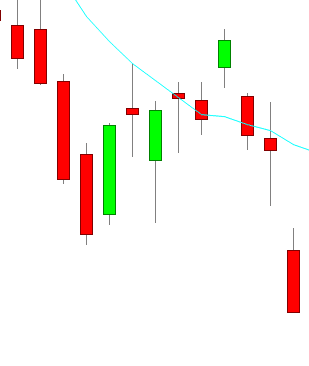 The bearish kicker is one of the most popular candlesticks and is believed to precede a bearish price run.  In this article, we’ve covered its meaning, and also provided some strategy examples to get you started exploring different filters and conditions with the bearish kicker pattern.