Last Updated on 11 December, 2021 by Samuelsson

Candlestick patterns have become very popular since they first were introduced to the western world in the late ’80s. And one candlestick pattern that’s quite popular among traders today, is the bullish kicker pattern.

A bullish kicker is a candlestick pattern that’s often formed after a significant downtrend, but could also form after an uptrend. In short, a bullish kicker consists of a large bullish candlestick, that’s preceded by a gap to the upside and a bearish candle.

In this article, we’re going to have a look at the traditional interpretation of the bullish kicker candlestick pattern. We’re also going to look at some example strategies, to provide some inspiration for your own trading

How to Identify a Bullish Kicker 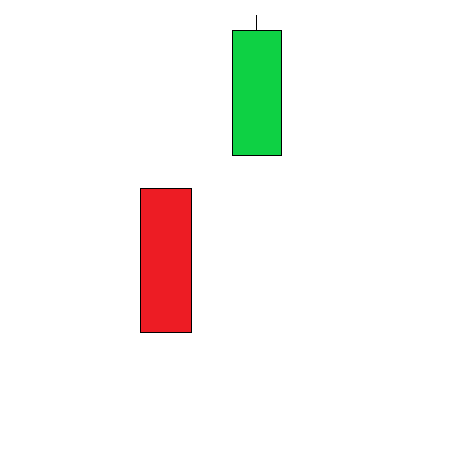 As said, a bullish kicker candle could occur regardless of the trend and is a strong bullish signal. In other words, it’s believed that the market is prone to going up after the signal has been effectuated.

Here is how you identify a bullish kicker:

What Does a Bullish Kicker Mean?

The pattern begins with a bearish candle, which tells us that the bears are currently in control. They manage to push the market further down, and at least it seems like that the bulls are nowhere to be seen.

However, when the second candle gets drawn, the tables are turned and the bulls seize control. The market gaps up above the open of the previous bar which is a major strength sign.

The second candlestick continues up, and confirms what the gap above the previous open showed us; namely that bears have lost control and that bulls now are in control.

As you see the bullish kicker is quite a dramatic pattern. It shows how the market forces shifted completely over-night. And this is something that we can take advantage of in our trading!

As we said, a bullish kicker isn’t dependent on the current trend of the market. However, it tells a slightly different story depending on if it’s preceded by an uptrend or a downtrend.

If we spot a bullish kicker after an uptrend, that could be a sign that the market still has enough strength to continue the uptrend. The bears tried to initiate a bearish reversal but were forcefully prevented by the bulls. In that sense, the bullish kicker becomes a sort of continuation pattern

However, if the pattern occurs after a downtrend, it instead might be a sign that the market has gone too far, and is about to revert. Especially in markets where mean reversion is prevalent, this could hold true. In that sense, here the bullish kicker becomes a sort of reversal pattern. 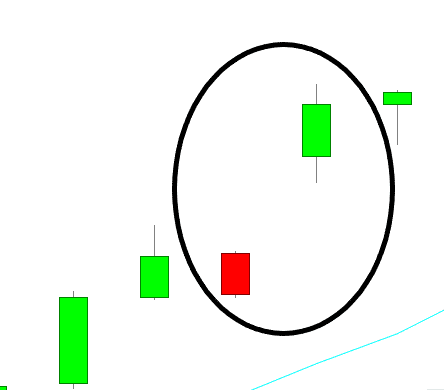 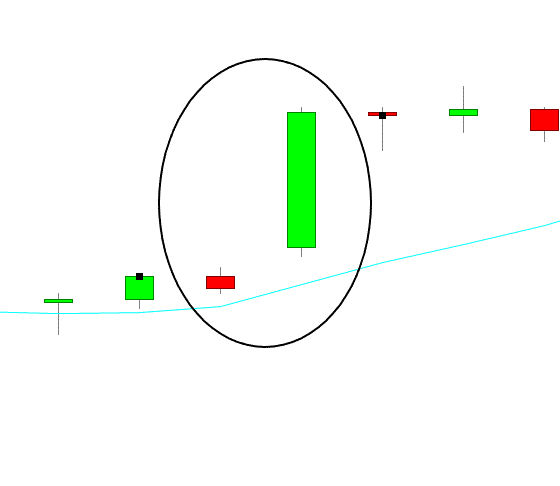 Ways of Enhancing the Accuracy of the Bullish Kicker 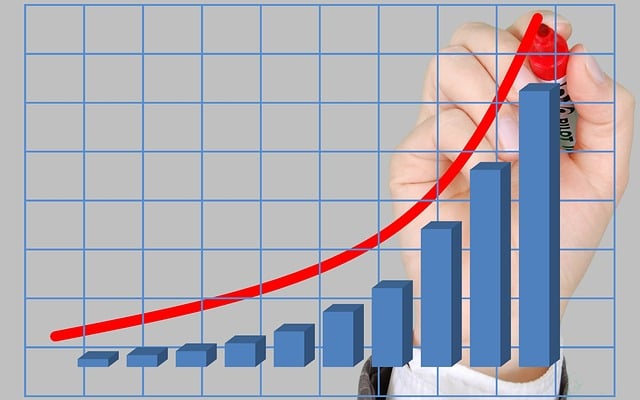 Now, while the bullish kicker on its own might not be enough to enter a position, you could definitively add some more conditions to improve the accuracy. Here I wanted to discuss what you could experiment with to improve on the signal, and perhaps make it a viable alternative!

1. Gauge the Strength of the Pattern

The bullish kicker is a candlestick that’s all about market strength. It shows that the market either is starting to recover from a downfall or that it has regained some vitality in the on-going uptrend. As such, we might want to look at the characteristics of the pattern to gauge the strength of the pattern:

You could go about in several ways to do this. For example, you could

Considering that we want to enter a trade because the market shows that it’s strong enough to continue up, it could be logical to assume that it’s better if:

These three signs show that the market has acted forcefully, and could help to increase the accuracy of the signal.

Now, depending on how the pattern works in the market you’re investigating, it could actually be that it works better in the opposite way! For example, a large gap to the upside could become a sort of exhaustive gap, where the market simply has depleted all its resources and won’t go higher.

Have a look at your market and timeframe to see what works best for you!

One great way to gauge the conviction of a market is to look at volume. If the volume is high, it means that many market participants are taking part in the move, which could make a pattern more reliable.

Applied to a bullish kicker, this could mean that you demand the volume for the two candles comprising the pattern to be higher than the volume of the surrounding bars. If that’s the case, it indicates that many market participants took part in forming the pattern, which could increase its accuracy.

However, you might also want to look at the two candles in the pattern separately. For example, if the first bearish candle has much less volume than the last bullish candle, it suggests that more market participants fuelled the up-move than the down-move. This in itself could be a good predictor of where the price is heading!

If the market is extremely volatile at the moment, it means that price swings like those we see in the bullish kicker pattern could become much wilder than in other cases. This means that the market more easily will perform such movements, which could give us quite a lot of false signals.

To mitigate this potential issue, you could demand that the pattern consists of bigger candles, and performs a bigger gap. That way you might succeed to rule out a couple of those false signals.

Strategies That Use Bullish Kicker (Demonstrational)

Most times, the bullish kicker on its own isn’t accurate enough to be traded without confirmation. If you want to trade the pattern successfully, you will have to build a trading strategy for the right market and timeframe, where the pattern works.

In addition to that, you will have to also incorporate other filters to ensure that you take a trade only when there is an edge. It could very well be that a bullish kicker in certain conditions produces awful results, while it could be a winning strategy in other conditions.

As we said earlier, a bullish kicker often is seen after a down-swing and precedes the coming up-swing.

Now, if we want to create a trading strategy where we only enter the market if it has gone down, we could use the RSI indicator as a filter. If we demand that the RSI with its period set to 2 is lower than 20, it means that the market has gone down a bit when we take the trade.

And that’s also how we’ll use RSI in this strategy. However, since the second candle of a bullish kicker is a large bullish one, the RSI reading, once the signal is effectuated, is going to be quite high.

Another key consideration here is that we don’t want to measure the RSI once the pattern is done, but before. So to know what the market looked like before the bullish kicker was finalized, we measure the RSI reading on the FIRST candle, which is the bearish candle.

So, the rules to enter a trade become:

If the above conditions are met, then we buy and hold for five days. 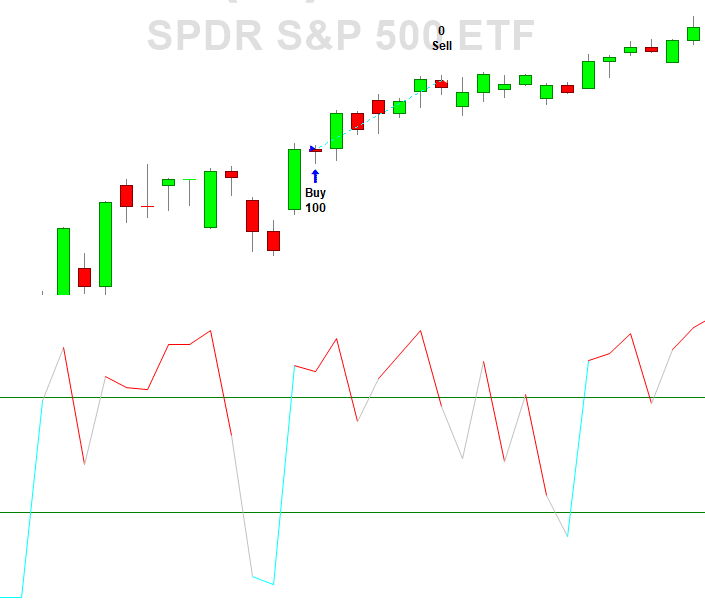 Now, another way of using the bullish kicker, is together with the ADX. We’ve already discussed that the volatility levels in a market could have an effect on the performance of the pattern. And to continue on that theme, we’re here demanding a low ADX value in order to enter a trade. This means that there is little volatility in the market, which could be to the advantage of the pattern.

Now, exactly as with the previous RSI strategy, we calculate the tax value beginning from the first bar of the pattern. That’s once again since we decide to only be concerned with the market state before the pattern was formed.

Here are the rules for the strategy. We buy if we have:

And for the exit, we once again exit after five bars. 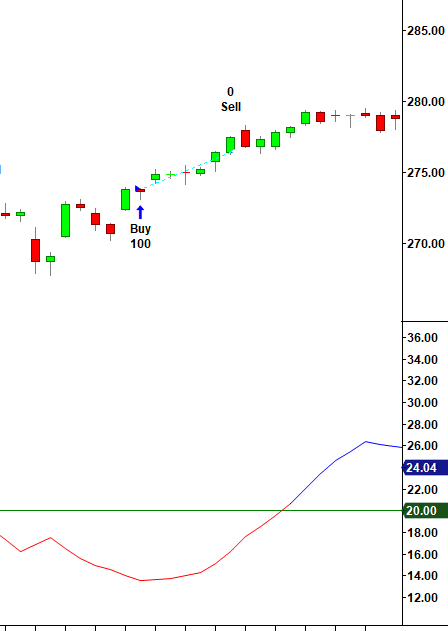 Here are the rules. We enter a trade if there is a:

Now, we exit the trade if the position crosses under the 10-period moving average. In other words, we’re using a sort of trailing stop. 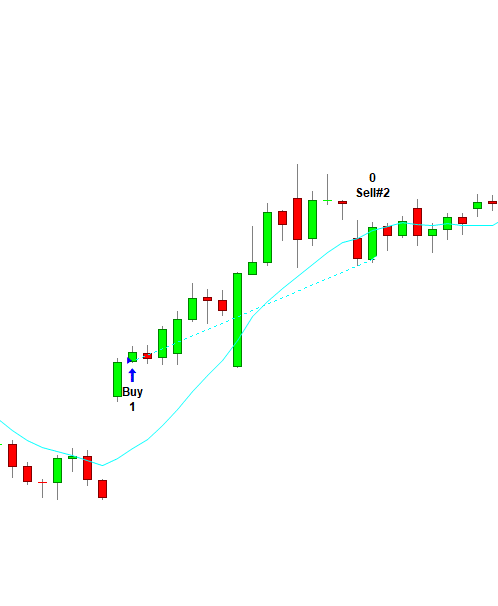 The bullish kicker is considered a strong bullish candlestick pattern that precedes a bullish price run. In this article, we’ve looked at what it means, and given you some examples of how you could start exploring the pattern in different trading strategies.