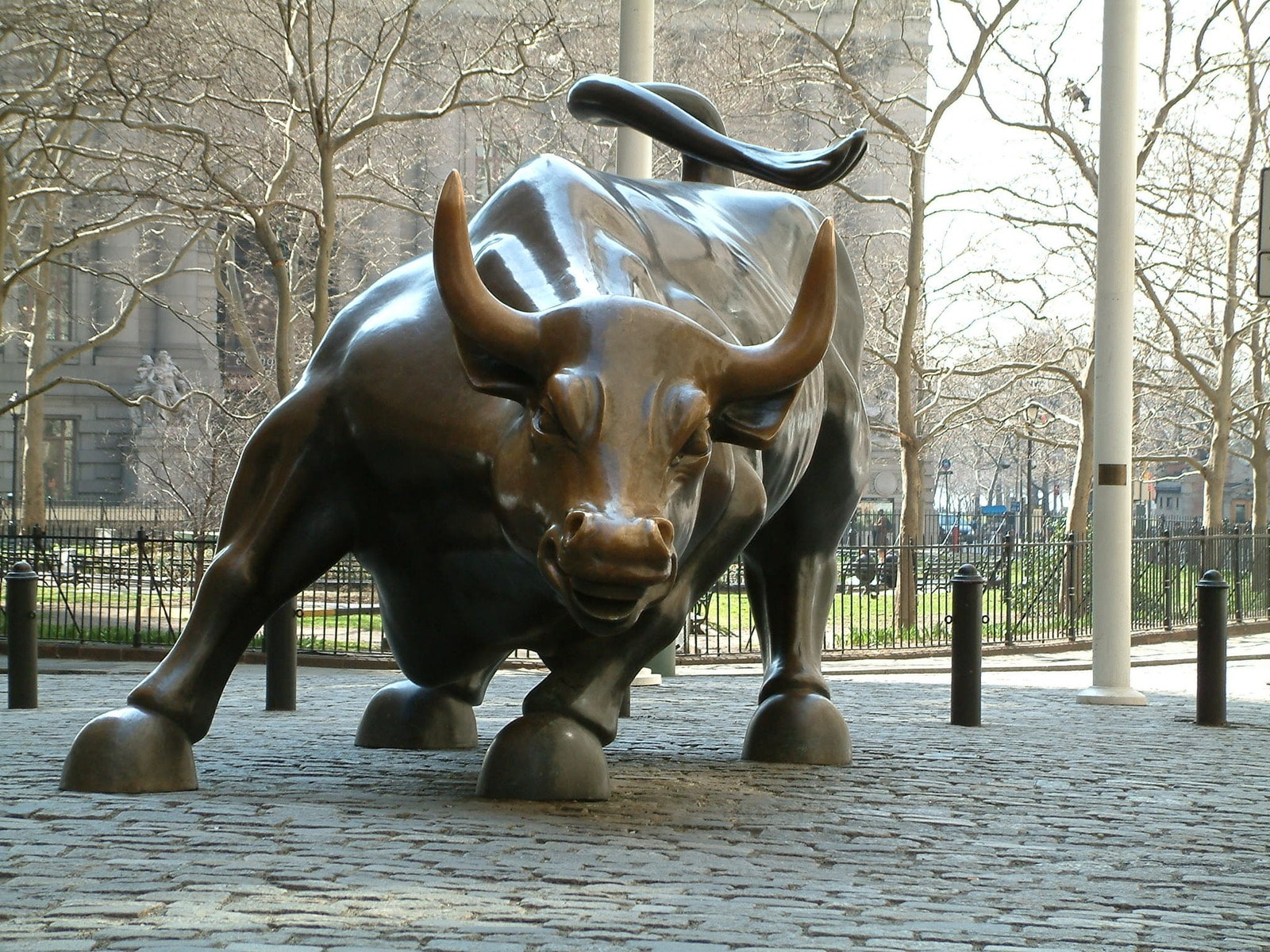 On the average, bull markets last longer than bear markets — 4,5 years compared to 13 months for bear markets.  Several bull markets have occurred in the U.S. market since World War 2 ended. The following are the bull markets in the S&P index (S&P 90 to S&P 500) in the more than 70 years of the postwar era:

After a minor economic slump in the few years following World War 2, the U.S. economy enjoyed significant growth, and the stock market rallied. The market was already in the bullish mode when Eisenhower came to power in 1953 with his budget-balancing policy.

Being mindful of inflation, the Federal Reserve increased interest rates in 1956, and the rate hike slowed the economy. Two other factors contributed to the end of the bull market: the Suez Canal crisis and the Soviet invasion of Hungary. 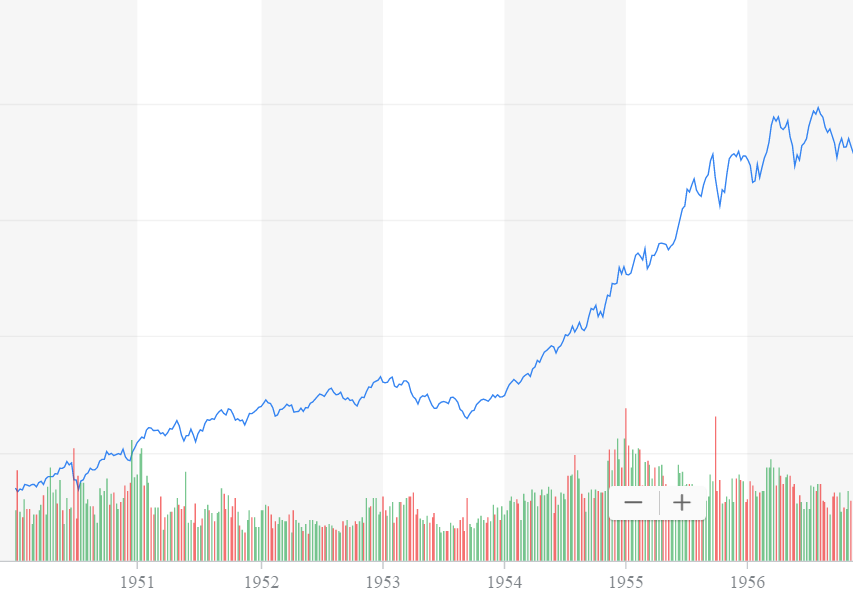 The Soviet Union sent the first man-made satellite into space, and this spurred the Americans to fight back to regain their leading role in technological advancement. The booming economy ensured a favorable sentiment in the market and gave rise to the bull market.

Although stock prices were going up, corporate earnings and dividends weren’t rising with it. And P/E ratios continued to increase to extreme values. Stocks had become highly overvalued, and investors were getting concerned. There was also the issue of the tension between the steel industry and the newly inaugurated President John Kennedy. Expectedly, what followed was a sharp decline in the market. 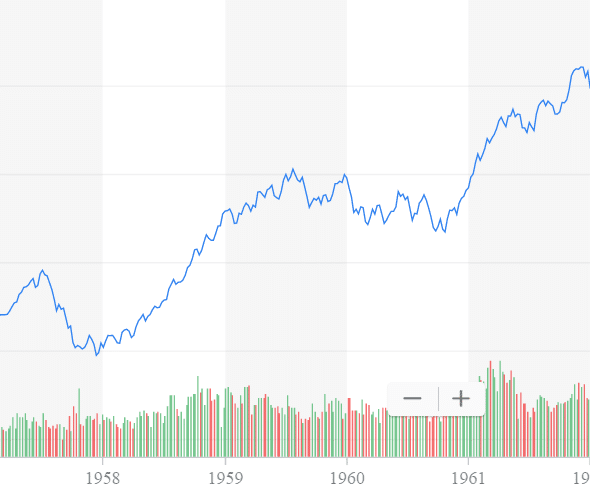 After President John F. Kennedy got America moving again as he had promised in his campaign trail, the economy picked up. Businesses were growing and expanding, and the unemployment rate was low, at 4%.

The stock market rallied from June 1962 to January 1966, with the S&P 500 gaining about 80% in value. The bull market experienced some bumps, though — a 3% loss on the day JFK was assassinated.

The market sustained the rally until inflation got very high, and the Fed started hiking interest rate. As usual, the market had to cool off. 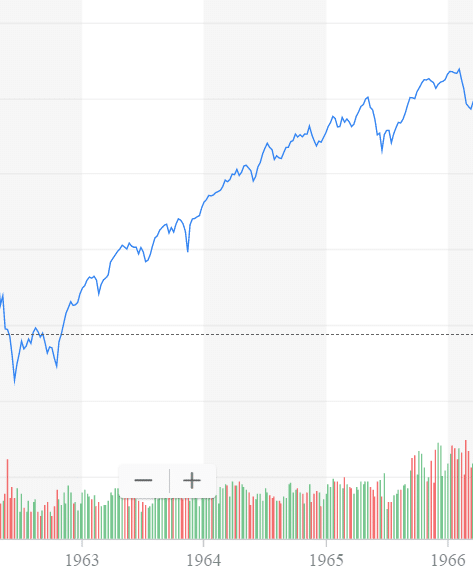 This is a very short and relatively volatile bull market, lasting only about two years. The job market was experiencing a boom, and the unemployment rate was only 3.4% — among the lowest in history. The economy was undoubtedly strong and investors were enjoying the moment.

The S&P 500 index rallied relatively fast during this short bull market and gained close to 50% in value during the two years — about 25% per annum. Starting in October 1966, the bull market quickly reached a new peak by November 1968.

High inflation and several social and political instability made sure that the bull market could not last long. The Vietnam War continued to rage and the North Vietnamese launched the Tet offensive. In addition, the murder of Senator R. Kennedy and Martin Luther King, Jr. led to investor’s apathy and market decline.

Large-cap stocks, such as IBM, Polaroid, Disney, and McDonald’s, became investors delight. These Nifty Fifty stocks — as they were fondly called then — would drive the new bull market after the 1968 decline.

Eventually, stocks got extremely overvalued, and inflation was sharply rising. When President Nixon announced relaxation of wage, rent, and price regulation, workers seized the opportunity to demand wage increase while businesses raised prices to meet up. Inflation soared, bringing the bull market to an end. 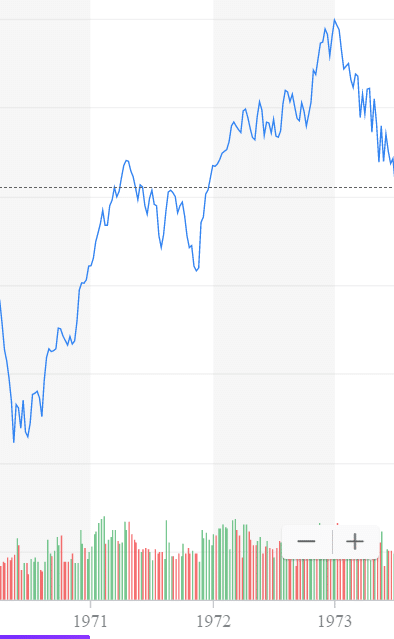 Stocks had fallen close to 50% in the 1973 bear market — one of the worst since the Great depression — and investors lost confidence in the market. But certain factors helped to bring back positive sentiments in the market: reduction in social unrest, end of the Vietnam War, and rising corporate profits.

The bull market started in October 1974 and ended in November 1980. The S&P 500 index would gain about 126% in more than six years. By 1979, inflation was getting out of hand, so the new Federal Reserve chairman, Paul Volcker, raised the interest rate to an unprecedented level. This brought this modest bull market to an end. 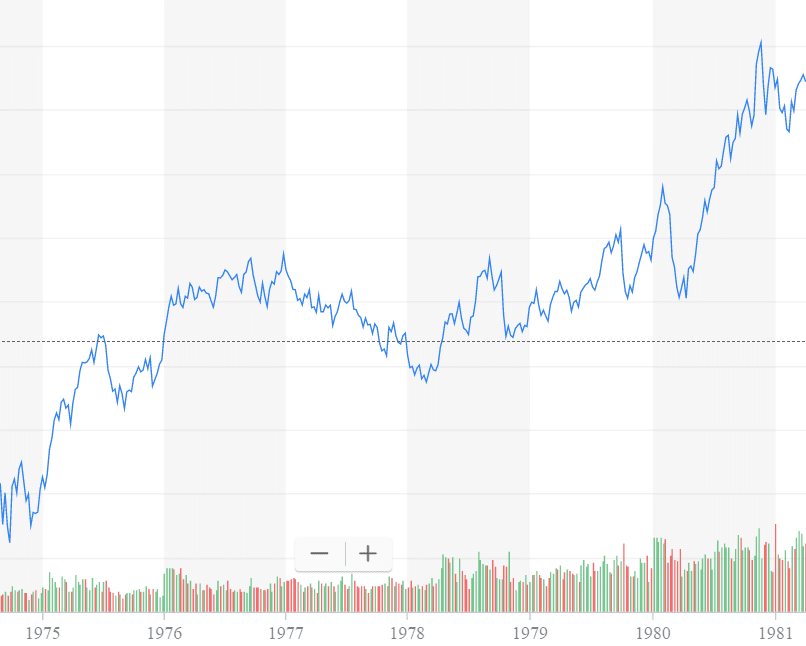 After assuming office in 1981, President Ronald Reagan reduced taxes. Along with the falling interest rates, this tax cut revitalized the U.S. economy — unemployment rate came down to below 6%, from a double-digit high.

Another bull market kicked in by August 1982, and the stock market witnessed a lot of public offerings and mergers. The S&P 500 index rallied impressively, making more than 27% yearly return — the best since

The bull market would end in August 1987 after the S&P 500 index had gained about 229%. Rising inflation, increasing interest rates, and extreme stock valuations would lead to a two-month market decline that ended with the famous Black Monday Crash. 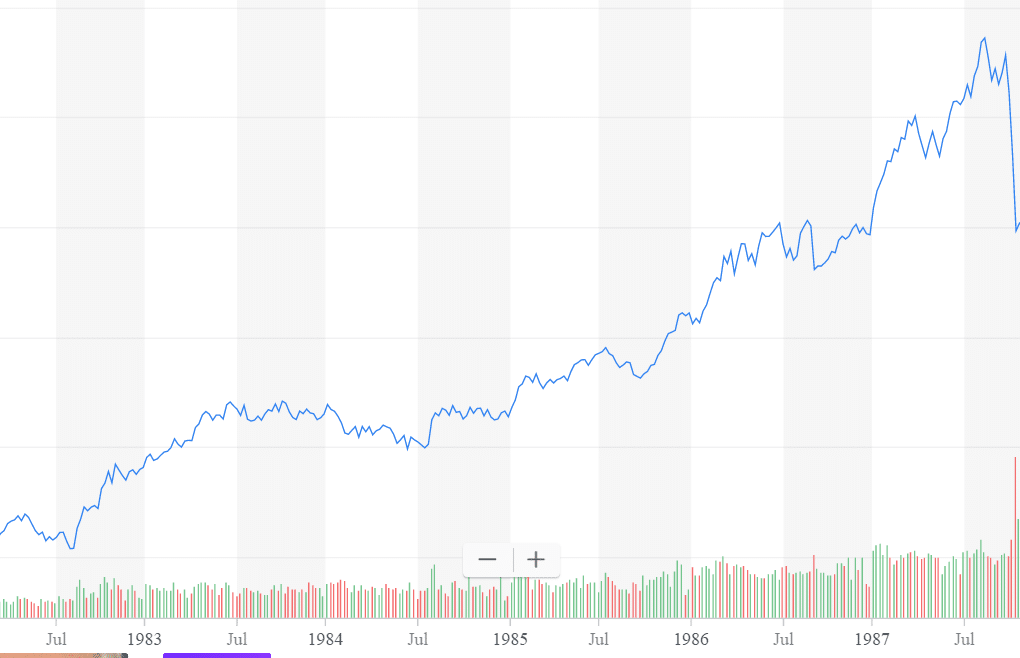 The market made an immediate comeback after the Black Monday crash on the 19th of October 1987. Investors were still very much optimistic about the market, and the economy was still in good shape.

This bull market was quite short, but the market regained what it lost in the preceding market crash. The S&P 500 index made a 65% return by the time it ended in July 1990.

The rise in oil prices when Iraq invaded Kuwait in 1990 and concerns about trade deficit triggered a mini bear market which lasted till October. However, the subsequent U.S. invasion of Iraq didn’t prolong the decline. 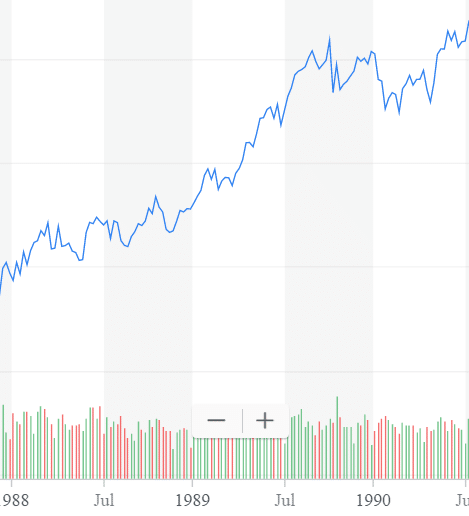 This bull market, often dubbed the Dot-Com Boom, is one of the longest and most prosperous bull markets. Several geopolitical factors were at play then: The Cold War just ended with the US coming out on top, and the Gulf War didn’t last long. And interestingly, the internet age was just beginning.

Investors sensed the huge potential in the internet and technology industry and kept investing in that sector. Retail investors embraced the market like never before. From October 1990 to January 2000, the S&P 500 gained about 417%.

As the irrational exuberance — in the words of the then Fed chairman, Alan Greenspan — continued, stocks in the tech sector became extremely overvalued, and the bubble would eventually burst. 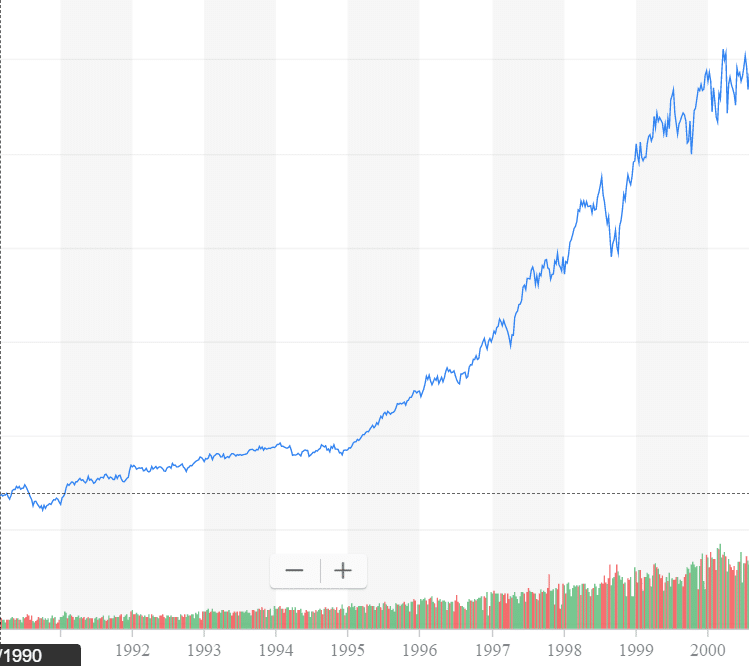 The Dot-Com Burst made the Federal Reserve lower the interest rates. The low borrowing cost enabled more Americans to buy homes (often without a down payment). Investment banks created complex financial derivatives — and sold to investors — to offset the mortgage risks.

These financial institutions recorded huge profits, and their stocks soared, propelling another bull market. The S&P gained about 102% (mostly in the financial sector) from October 2002 to October 2007. But, eventually, this house of cards built by these banks will come falling. When the Fed started increasing interest rate, homeowners defaulted. Those mortgage-linked financial derivatives became worthless, leading to the collapse of some big investment banks — the beginning of the great recession. 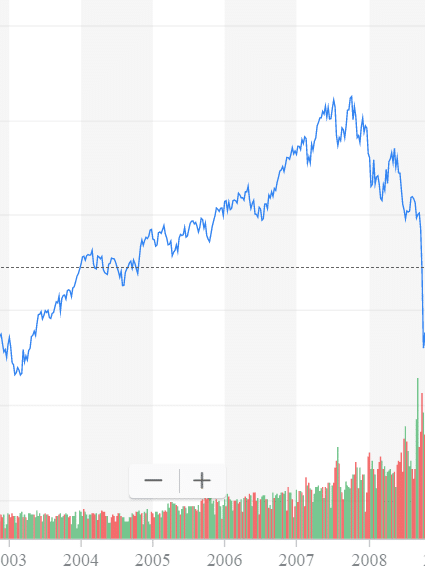 The recovery from the great recession was a very slow one, but lasting more than 10 years, it has also become the longest bull market in history. The bull market is driven by a combination of factors: low interest rates, steady economic growth, and record corporate earnings.

Starting on the 9th of March 2009, the current bull market has made record highs. So far, the S&P 500 index has advanced about 400% from the great recession low. The market is driven by tech giants like Apple, Amazon, Google, Facebook, and Microsoft.

Although some analysts think this bull market is getting old, nobody knows when or how it will end. As they say, “bull markets don’t die of old age.”

Bull markets come and go, no matter how long any particular one lasts. And there have been several bull markets since the end of WW 2. While you enjoy the growth in your assets during the bull market, it pays to study the previous bull markets and how they ended so that you know when to rebalance your portfolio. Happy trading!

For those who are interested, we also have an article where we list many examples of bear markets! Have a look!