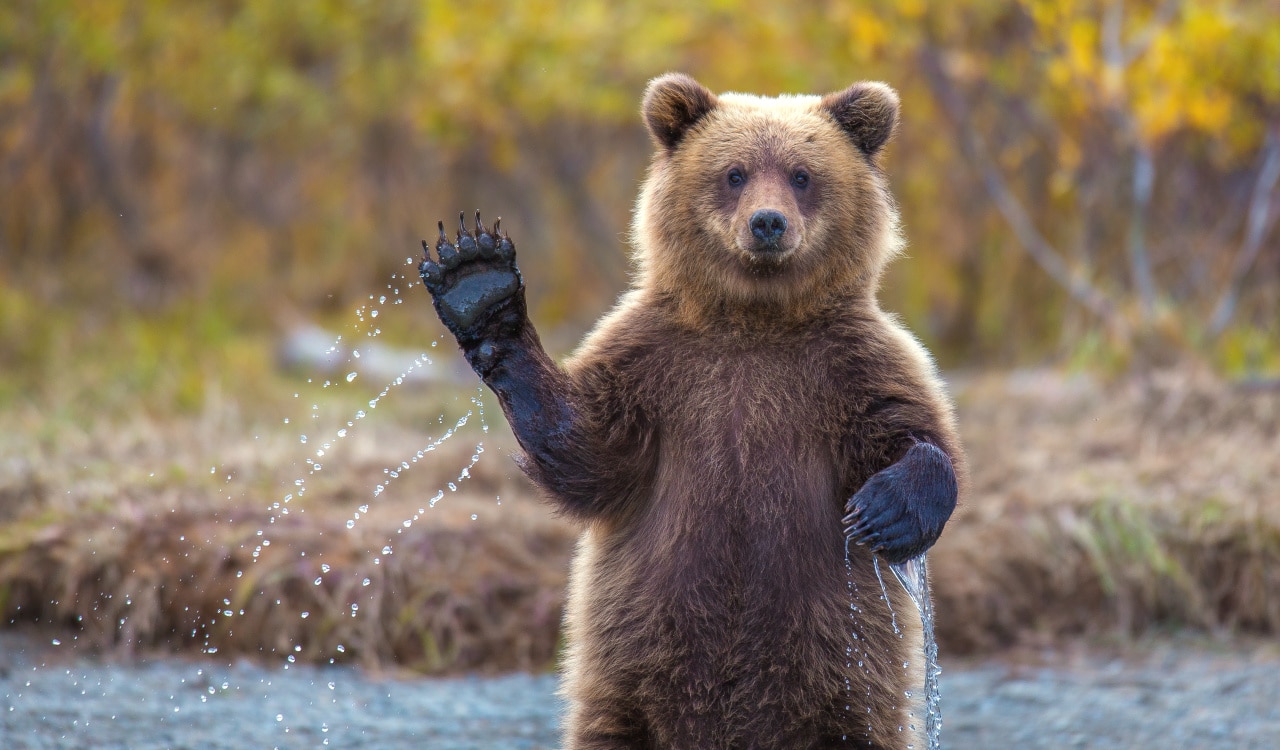 A bear market is a decline of 20% or more lasting more than two months. Stocks tend to fall very fast during bear markets, erasing — in a period of a few months — a large portion of the gains that took the preceding bull market years to build.

Going by the definition, a lot of bear markets have been witnessed in the U.S. market over the years. Here are the bear markets in the last half-century of the Dow Jones Industrial Average and what possibly led to them:

This bear market started on the 29th day of November 1968 and ended on the 26th of May 1970, lasting about 18 months and involved 370 trading days. It happened during the Vietnam crisis.

It was widely believed that the Vietnam crisis played a huge role in triggering the bear market. The war caused widespread protest in the US and made investors nervous. Apart from that, inflation was on the rise, and the Federal Reserve aggressively increased the interest rate in an attempt to manage the rising inflation.

The result was obvious: Businesses started finding it difficult to obtain credit, leading to an increase in unemployment and a slump in economic growth. All these factors contributed to making the stock market to crash. 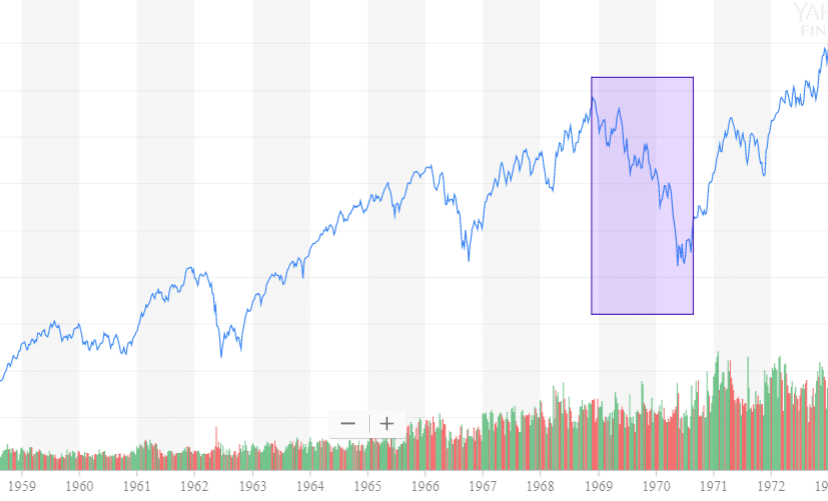 This bear market started on the 8th of January 1973 and lasted till the 5th day of December 1974. That was almost two years and covered about 485 trading days.

Some important political and economic events preceded this particular bear market. As the market was still recovering from the previous crash, President Nixon took the US off the gold standard in 1971. Not long after, the Watergate scandal broke out, and the president had to resign.

Furthermore, there was the OPEC oil embargo, which shot up the price of oil to four times its pre-embargo price. The dollar weakened, and inflation went to the roof, with the consumer price index going as high as 22%. As expected, the Fed increased interest to combat the situation. 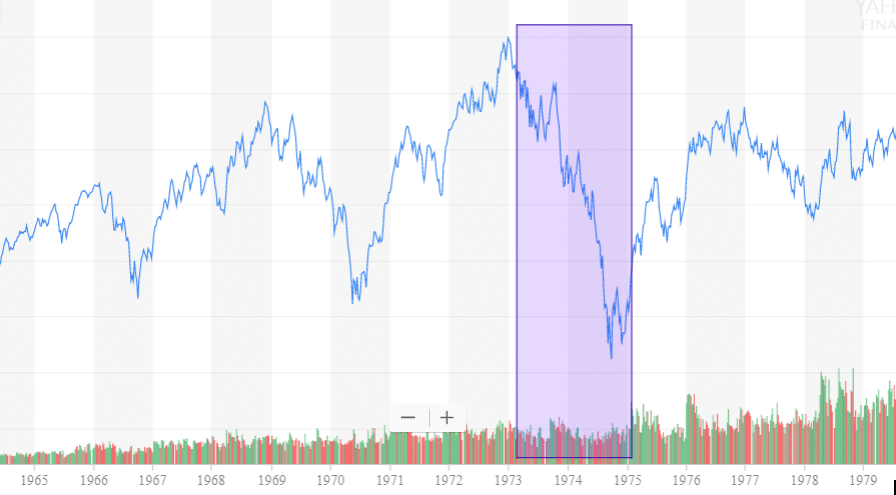 This bear market was quite a unique one because it was the first time the US would experience a trade deficit, which has continued since then. It wasn’t even up to two years after the Nixon bear market when it started, but it extended into the Carter administration.

Inflation wasn’t as high as it was in the previous bear market with the consumer price index growing approximately 10%. However, there was poor growth in real earnings, which increased by about 3% only. It was a clear case of stagflation — a period of high inflation rate but slow economic growth.

The market crash began on the 21st of September 1976 when the Dow Jones Industrial Average was trading at 1014.79. By the 28th day of February 1978 (when DJIA bottomed), it was trading at 742.12. The index lost 272.67 points, which was about 27% of its value, and it took just 363 trading days. Meanwhile, as the bear market raged, gold was experiencing a bull market because investors were using it to hedge against inflation. 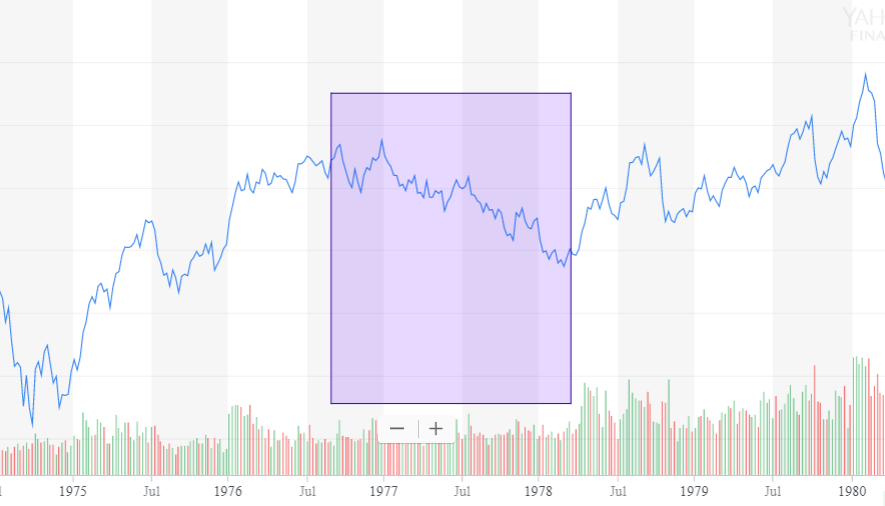 As the market tried to recover from the 1978 bottom, the inflation rate was still on the rise and the economy was still in a recession. In an effort to fight the lingering inflation, Paul Volcker, the then chairman of the Federal Reserve, increased the interest rate to as high as 14%.

This expectedly worsened the recession, and the market, as usual, suffered for it. There was also the issue of 1979 spike in oil prices in the wake of the Iranian Revolution and reduced oil supply globally, which also affected the U.S. economy severely.

The result of these events was another bear market which started on the 24th of April 1981. The DJIA was trading at 1024.05, slightly above 1976 high. This bear market took about 329 trading days to bottom, covering a period of 13 months. 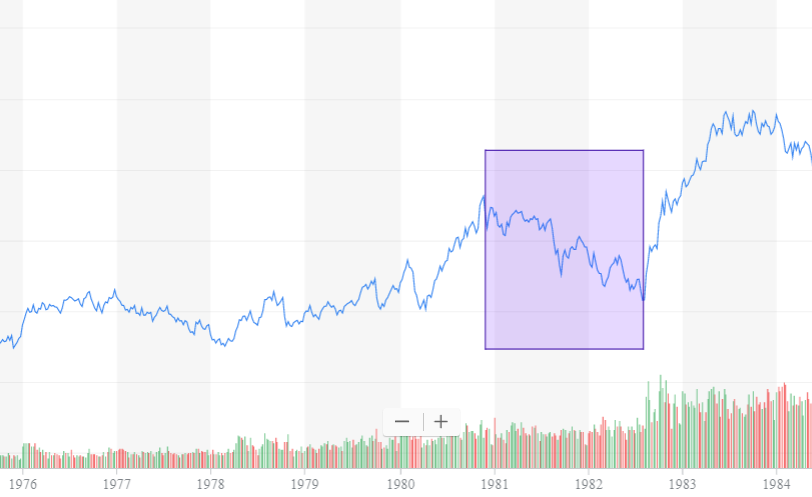 This was a very short bear market and lasted approximately two months. It will always be remembered for the 23% drop in the value of DJIA on the 19th of October. The day was rightly nick-named the Black Monday. The DJIA lost 508 points in one day — about 23% of its value — and this remains the biggest loss (in value) on a single trading day to date.

A lot of factors may have been responsible for this market crash, but many believed that computerized trading was the main cause of the Black Monday event. Some investors believe that stocks were extremely overvalued prior to the crash. 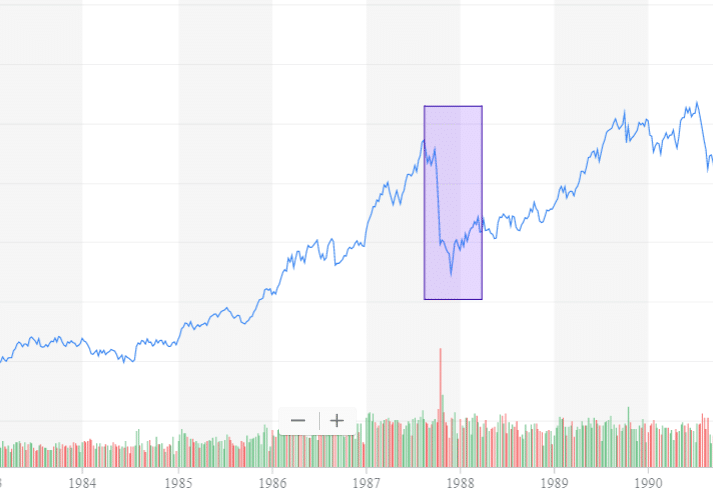 This is another short bear market, and it lasted about three months, involving only 62 trading days. The Gulf War started during the bear market but the rumors and the events preceding the war may have contributed to the market crash before the war actually began. And with the war came a sharp rise in oil prices. 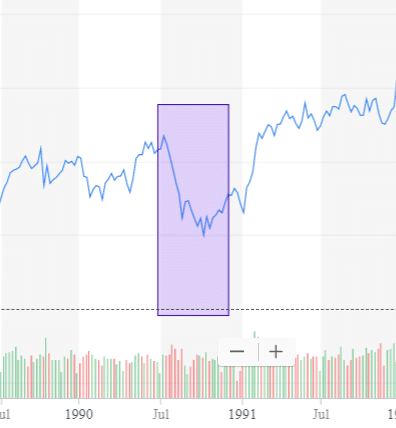 Often dubbed the dot-com bubble, this bear market was triggered by extreme stock valuation, especially the tech stocks. Stocks were extremely overvalued, and in fact, many stocks in the tech industry were trading at their all-time highs prior to the market crash. Investors were just speculating without any reasonable fundamental analysis. Besides, there’re also the issues of corporate accounting scandals.

Then, midway through the market slide came the 9/11 attacks, and this extended the bear market by more than one year. The market crash which started on the 14th of January 2000, lasted till the 9th of October 2002. The 33 months duration became the second-longest bear market since World War 2. 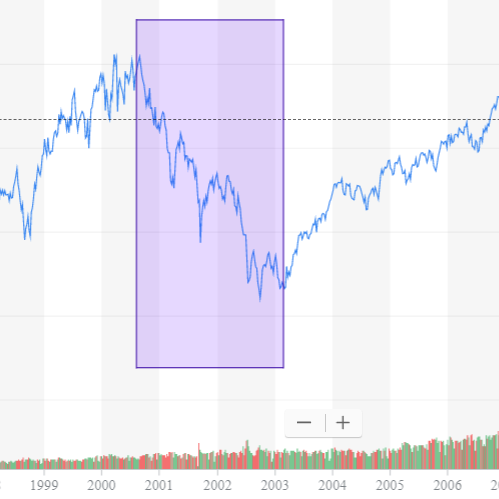 This bear market was triggered by the 2007 housing crisis that shook the global financial industry. A lot of homeowners defaulted on their home loans. The enormous amount of bad debt led to the collapse of many financial institutions around the world, as liquidity became a major problem.

Many major banks had to be bailed out to preserve depositors’ funds. Governments around the world had to formulate policies to stir their various economies out of the crisis. Central banks came up with different stimulus packages, which included negative interest rates. After several years, the US was able to taper off their stimulus package, but other regions like Europe have not. 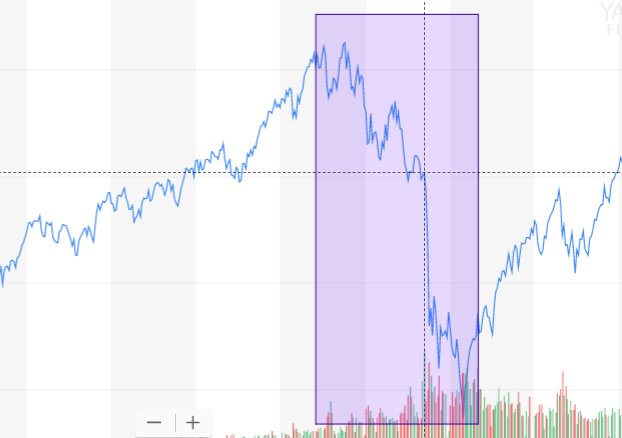 A bear market is a necessary phase in the market cycle. There have been several bear markets in history, and each of them was triggered by a different set of events. Most of the time, bear markets are shorter than the preceding and succeeding bull markets, but they have always wiped out a reasonable percentage of the gains made in the bull markets. It pays to study the previous bear markets and learn how to protect your investments when the next bear roars.

For those who are interested, we also have an article where we list many examples of bull markets! Have a look!