Jim Simons, born in 1938 and despite his young and good looks has been chain-smoking for decades, recently stepped back as Chairman of the management group.

Jim Simons is the founder and main force behind Rennaissance Technologies, the asset manager that manages the best fund of all time: The Medallion Fund. James Simons is, according to Wikipedia, the 66th richest man in the world. What is more amazing is that James Simons has accomplished to generate his wealth with much less compounding than for example the more famous investor Warren Buffett.

How has Jim Simons and the Medallion Fund managed such a return?

While Buffett can let his wealth grow by the magic of compounding, Jim Simons has not had that opportunity. While Buffett has presumably compounded at 19% annually, Jim Simons’ Medallion Fund has averaged 66% annually from 1988 to 2018. This means a 100 000 investment in 1988 would be worth 4 010 907 000 000 today! Obviously, no fund manager can manage such an amount without moving the markets. Thus, a lot of the capital has been handed back to the owners over the years.

How did James Simons keep the trading algorithms a secret?

How Jim Simons’ trading strategies made 66% a year has been covered at Quantified Strategies. It’s an interesting read, and additionally, the linked article contains some very interesting comments from the recent book about Jim Simons written by  Gregory Zuckerman.

Here are a couple of great interviews with Jim Simons

Jim Simons: Life Lessons from the ‘World’s Smartest Billionaire’. Jim Simons was a mathematician and cryptographer who realized: the complex math he used to break codes could help explain patterns in the world of finance. Billions later, he’s working to support the next generation of math teachers and scholars. TEDtalks and TED’s Chris Anderson sits down with Simons to talk about his extraordinary life in numbers.

What kind of trading strategies have Jim Simons and the Medallion Fund employed?

It is standard in the industry to sign a non-compete contract. Renaissance has a 5 year non-compete, and they will and have sued other companies that employed their former employees. Millennium had to pay $20 million when some employees joined Rentech.

At 40, Jim Simons left his math career to launch the most successful hedge fund ever: Renaissance Tech. 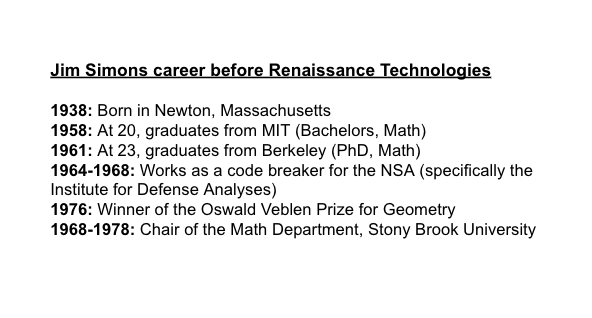 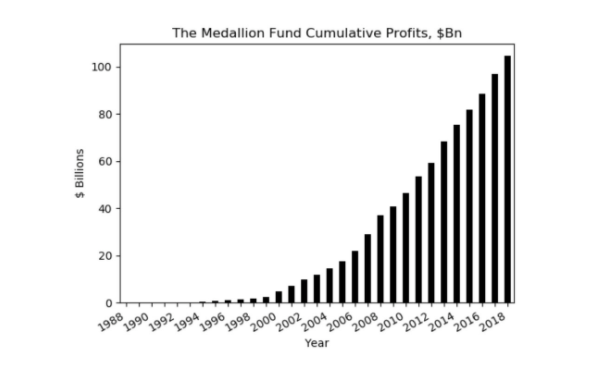 While at Stony Brook, Simons started trading commodities (with money staked by former MIT classmates). The side investing was good enough that Simons — also going through a divorce — decided to leave academia and launch his own money management firm in 1978: Monemetrics.

James Simons is a mathematician and American investor born on April 25, 1938. He is regarded as one of the greatest investors of all time and founder of Renaissance Technologies (Rentech) — a quantitative hedge fund with about $160 billion assets under management — and the founder of Math for America. He was named the Financial Engineer of the Year by the International Association of Financial Engineers in 2006.

Jim Simons grew up in Brookline and found his passion for mathematics at an early age. Simons worked as a floor sweeper store at a garden supply store, previously as a stock boy but was demoted because of his inability to remember inventory. However, he has a sterner ambition of becoming a mathematician at the Massachusetts Institute of Technology (MIT).

He was accepted into MIT in 1955, where he majored in mathematics. He went further and completed his doctorate in mathematics at the University of California at 23. He later worked on critical mathematical theories such as Chern-Simons form — playing a significant role in topological quantum theory. His career as a mathematician was a successful one. Also, he has won multiple awards and was later inducted into the United States National Academy of Sciences.

Although he has a successful career as a prize-winning mathematician and a master code breaker for the Institute for Defence Analyses, Simon decided to pursue a career in the finance sector. And in 1978, he started Monemetrics, a hedge fund — the predecessor to Renaissance Technologies.

Initially, Simon never thought he could apply a mathematical model to his hedge fund, but later discovered he could decipher market data using mathematical and statistical models to look for non-random data to forecast market returns.

“We search through historical data looking for anomalous patterns that we would not expect to occur at random,” he said.

“We have three criteria: If it’s publicly traded, liquid, and amenable to modeling, we trade it.”

By 1988, he transitioned to using only quantitative analysis to analyze and trade the market. Simon worked with experts from complex fields, including data analysis, mathematics, statistics, and many other scientific-related areas. The company was filled with mathematicians, programmers, cryptographers, and physicists. The complex mathematical formulas developed and used were responsible for its success.

The hedge fund Renaissance Technologies is famous because of its Medallion Fund, which has produce profits of over $100 billion with an average annual return of 71.8 percent; unfortunately, only employees of the fund, their family members are eligible to be in it.

He has an estimated net worth of $23.5 billion, making him the 23rd wealthiest American list in 2020 by Forbes and number one on the Forbes’ list of highest-earning hedge fund managers in 2019.

He has made a significant impact in the scientific world; Simon co-founded the Simons Foundation with his wife, Marilyn Simons, in 1994. The foundation is dedicated to supporting education, scientific research, and health. He has contributed over $2.7 billion to the foundation and also funding to support autism research.