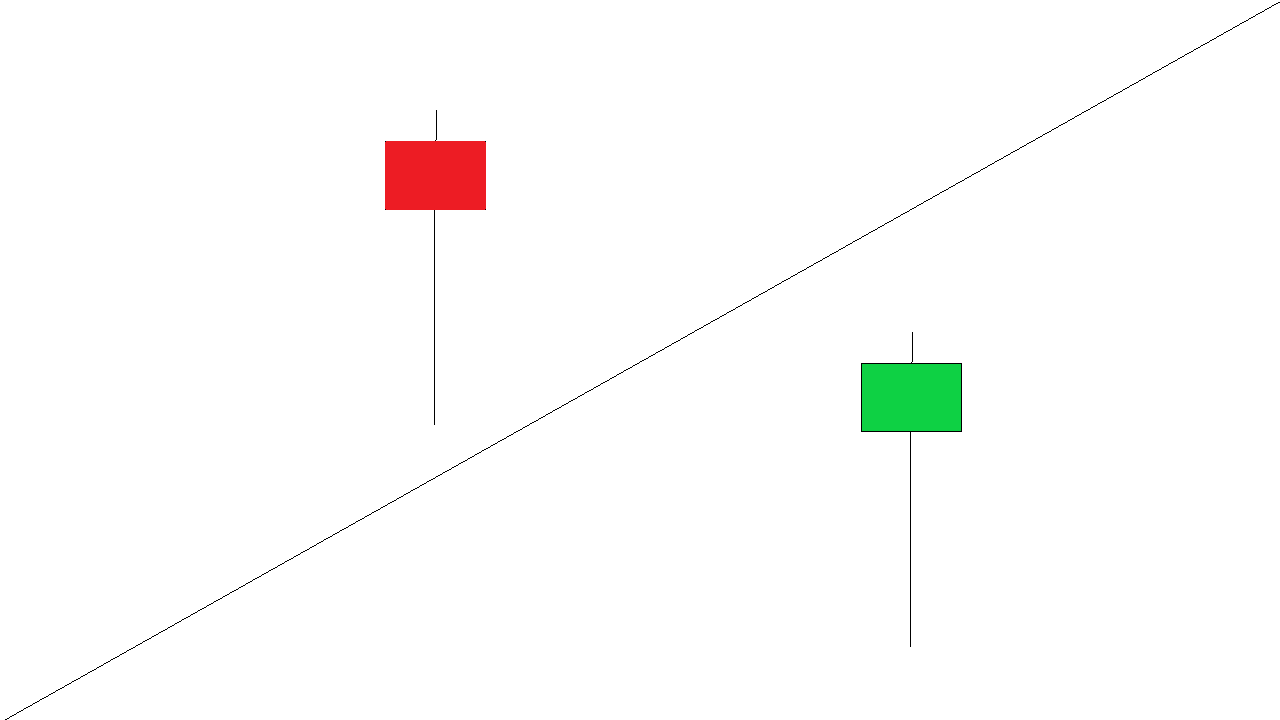 The candlestick chart is one of the most popular charting methods out there. With their clear representation of market data, candlesticks let you quickly gain an overview of the market’s movements and swings. In addition to that, candlesticks also form patterns, and one pattern, which is the topic for this article, is the hammer candlestick.

A hammer is a bullish reversal candlestick pattern that forms after a decline in price. It signals that the market is about to change trend direction and advance to new heights. In short, a hammer consists of a small real body that is found in the upper half of the candle’s range. It has a small or absent upper wick, and a long lower wick that’s at least twice the size of its body.

In this article, we’re going to cover the conventional interpretation of the hammer pattern. You’re going to learn what it means, how to spot it, and how you could go about when building your very own trading strategies using the pattern.

How to Identify a Hammer

Since the hammer is a reversal pattern, we should look for it once the market has declined a bit. In fact, this is even part of the pattern description. If we spot a hammer after an uptrend, then that’s not a hammer, but a hanging man candle. We’ll touch on this in just a bit! 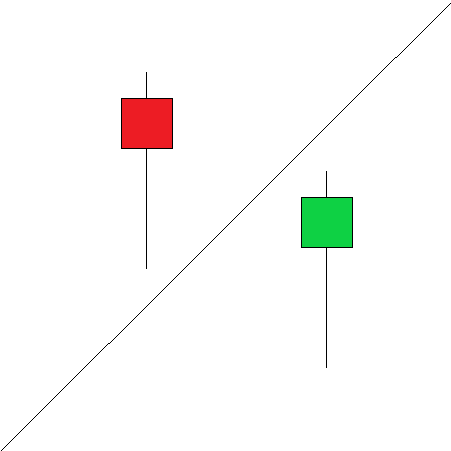 Here is how you identify a hammer:

Candlestick patterns are great for visualizing what’s happening in the market. Every pattern tells a different story, and here follows the story of the hammer pattern.

Coming from a bearish market trend, the sellers are in control, and the market is anticipated to head lower.

The market opens and immediately heads lower. However, as the day goes on, the selling pressure starts to dwindle and eventually gives the buyers a chance to seize power. As the buying pressure increases, the market goes higher and manages to recover from most of the losses that day. As a result, what is left is a long wick.

The following day, the buyers continue to push prices higher, and the market starts a new, bullish trend. 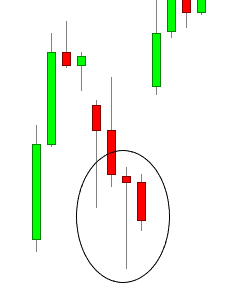 Ways to Improve the Accuracy of the Hammer Pattern

When it comes to trading the hammer as it is, that’s seldom a good idea. Depending on the market and timeframe, you will have to add additional filters or conditions to enhance the signal.

Below we will share a couple of things that we often look at when trying to filter out bad trades and improve the accuracy of a pattern or strategy.

Adding volume to your trading is like adding a new dimension. While price data tells you how the market has moved, volume shows the conviction behind those movements.

For example, if there is high volume it means that many market participants formed the pattern. This, in turn, increases its significance, since more people stood behind and supported that very market action.

When it comes to using volume with the hammer pattern, there are quite a few scenarios that can help us gauge the accuracy of the signal.

For example, if the hammer is formed under high volume, it shows us that there was fierce market action, where sellers and buyers fought to come out as winners. Having the buyers win such a fight, could be seen as a positive sign.

However, the very opposite could be true as well. Perhaps the hammer was carried out with very low volume. Then the low volume could be a sign that the bearish trend is getting weaker and soon will give in for buyers to enter the scene. This might especially be true if we see declining volume in the bars preceding the pattern.

All in all, using volume to determine whether a pattern works or not can be done in many ways. What works best, is up to you to decide. We wish that we could give you an easy answer, but every filter out there will work better in some markets than others!

2. Comparing the Ranges of the Surrounding Bars

Another way of measuring the conviction with which the market formed a hammer, is with range. The bigger the range, the more significant the pattern becomes.

In the case of the hammer signal, this means that we might want to have a long wick. If you remember, we previously discussed that the hammer is thought to be a reliable pattern, since the buyers, within the same bar, were able to recover the losses made earlier that day.

Now, if the losses that the market recovered from were bigger, that would logically mean that the buyers succeeded too push the price a longer distance. In other words, the longer the wick, the more reliable the signal. Of course, provided that this very assumption holds true!

Another approach you could use to improve the accuracy of a hammer, is to gauge the strength of the downtrend.

In mean-reverting markets like stocks and other equities, the bigger and more abrupt a fall we get, the more likely the market is to snap back up quickly again.

Another way could be to look for range increments. For instance, if you see that the ranges of the bars leading down to the hammer increase in size, that could be a promising sign.

Most traders who make use of the hammer pattern would agree that you shouldn’t use it without adding your own filters. In this section of the article, we wanted to share with you a couple of example strategies. Hopefully, they will provide inspiration for you in your own testing!

Keep in mind that the strategies shared here aren’t meant for live trading. You should come up with your own trading strategy that utilizes different patterns and filters if you want to stand a chance in the market. Our guide on how to build a trading strategy shows you how to do this!

With all this said, let’s get to the hammer strategy examples!

Since a hammer appears after the market has gone down, it means that it should be below its moving average. Now, we may use the moving average in two ways:

So the rules for this example strategy become:

And then we exit once the close crosses over the 10-period moving average. 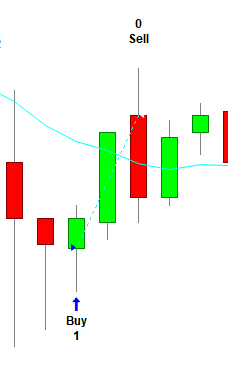 Do you remember that we talked about using volatility to filter out bad trades?

We’ll, one quite good way of measuring volatility is to use the ADX indicator.

Typically, the ADX uses a 14-period lookback period, and is believed to signal high volatility when it shows readings of 20 or more.

In our research, we’ve found that it sometimes works better to use the ADX with a slightly shorter period, like 5 or 10, but it varies greatly.

However, for this strategy, we’re going to use the 10-period ADX, and require that it’s higher than the ADX reading 10 bars ago. This becomes a sort of adaptive approach to measuring volatility, where we don’t care about the absolute levels, but whether the volatility right now is higher than that 10 bars ago.

So the rules for this strategy become:

Then we use a simple time exit, and get out of the trade 5 bars after the entry.

As you’ve heard now several times, a hammer forms in a downtrend, and as such we might want to ensure that the market has gone down enough before we take the signal. The more a market goes down the higher the chance that it will revert to it’s mean.

We want to enter when the RSI indicator shows oversold readings. A hammer that’s formed during such conditions should have a higher chance of success.

Now, typically the RSI uses a length of 14, but as we share in our article on RSI, we’ve found that it works much better with shorter settings. As such we’ll be using RSI with the lenght set to 5, which we’ve had some good experiences with.

These are the rules for this particular strategy. We buy if:

And then we also use the  RSI to exit the trades. More specifically, we’ll exit if the RSI crosses above 50. Such exit methods typically work very well with mean reversion strategies. 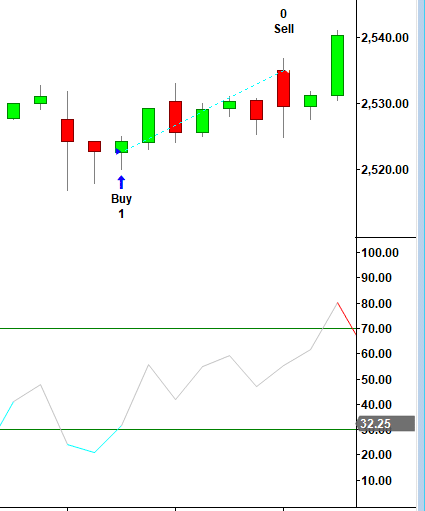 If you’ve seen both the hammer and the hanging man pattern, you might be a little confused. They loook the same, and still carry the opposite meaning.

There is nothing wrong with that observation. A hanging man pattern is a hammer, with the difference that it occurs after an uptrend and signals a negative reversal. That is, after a hanging man, the market is believed to go down.

In this article, we’ve had a closer look at the hammer candlestick, what it means, and how you could improve it.

Just remember that it’s all about creating your own strategy. The hammer might not work on all markets, and in order to find out where it works, you’ll have to test it on different markets and timeframe. Once again, we show you how this is done in our article on how to build a trading strategy.