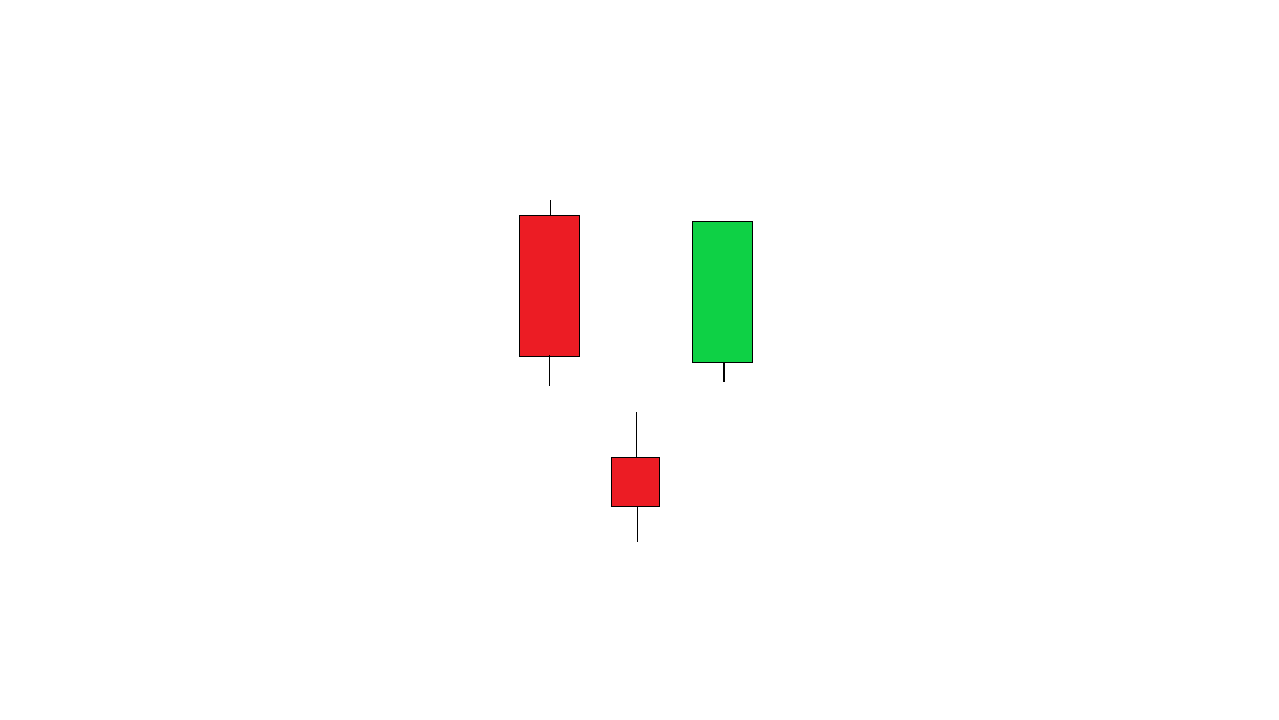 Candlestick patterns are some of the most popular technical analysis methods in trading today. With their eye-catching features they make gauging market action a breeze, and could help you get an edge in the market. One such candlestick pattern is the bullish abandoned baby!

A bullish abandoned baby is a bullish reversal pattern, meaning that it appears at the end of a downtrend and signals the reversal of the trend. The bullish abandoned baby consists of three candles, where the first is bearish and followed by a gap to the downside. The second one gaps down and becomes a doji, while the last candle gaps up and ends as a positive candle.

In this guide to the bullish abandoned baby you’ll learn how to identify the pattern, its meaning, and how you could implement it in your own trading.

How to Identify a Bullish Abandoned Baby 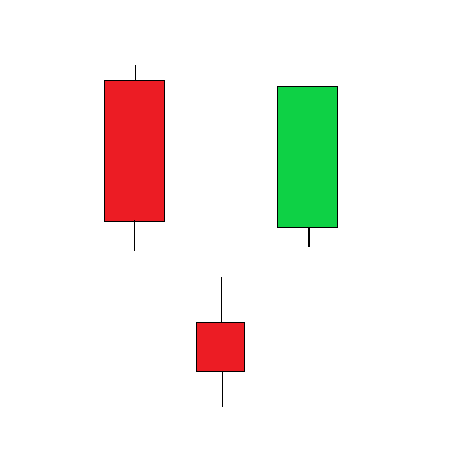 For a candlestick pattern to be called a bullish abandoned baby, it must meet the following criteria:

For those of you who think the bullish abandoned baby is reminiscent of a morning star, you’re completely right. However, the fourth point on the list above is what separates the two!

What Does the Bullish Abandoned Baby Tell Us About the Market?

Since candlestick patterns are representations of market data, they give a clear picture of the movements of the market. This also means that they tell us a lot about how buyers and sellers interacted at any given moment.

Trying to analyze why the price moved in a certain way is a great way to learn more about the market and its inner workings. And while it’s hard or impossible to know exactly what happened, that’s not what’s important.

The important thing is to just get started doing your own analysis. Soon enough you will make some interesting discoveries, that very well could lay the groundwork for a future trading strategy!

So let’s try and see what might have happened once the market performs a bullish abandoned baby!

Coming from a bearish trend, most market participants are negative and expect the market to continue down. This leads to increased selling pressure, and pushes the market down a significant amount.

The negative market sentiment spills over to the next trading day, and results in a big negative gap. However, having performed so powerful bearish moves, sellers are exhausted. For the rest of the candle,  buying and selling pressure is equally strong, which results in a doji.

Since the market is hesitant and oversold buying pressure increases on a belief that a trend reversal is imminent. As a result, the market gaps up above the high of the preceding doji.

Upon spotting the bullish gap, more market participants follow along in hopes of reaping the rewards that come from catching a new trend early. As such, the last candle ends as a big winner!

Here follows an example of the bullish abandoned baby pattern:

How to Use the Bullish Abandoned Baby in Trading: How to Improve the Pattern

While candlestick patterns are believed to provide accurate entry signals, most successful traders would say that this is not the case. In order for the bullish abandoned baby to work you will have to make sure that you:

Some traders believe that trading is just a matter of learning the patterns found online, and then start using them. What nobody has told them is that every market and timeframe has its own special quirks. As such, a pattern will never work on all markets and timeframes, and where it does work, you often want to apply some sort of filter, to enhance the signal.

Now we’ll show you a couple of powerful techniques that we currently use in our own trading strategies, that we believe will be of great value to anyone wanting to incorporate the pattern in their trading!

Many markets have seasonal or time-based tendencies. In short, it means that some markets tend to be more bullish or bearish at certain times.

Now, if you know when these periods are, you could incorporate that into your market analysis. For example, if you spot a bullish abandoned baby at a time when the market usually turns more bullish, then you could be a little more certain that the patter is worth acting on.

Conversely, if you spot the pattern at a time when the market usually gets more bearish, then you should perhaps be a little more careful.

So where should you look for tendencies like these? Well, you could go about in several ways, but here are the ones we use the most:

The volume tells us a lot about the conviction of the market. The more the volume, the more certain we can be that the move we just witnessed was backed up by a majority of market players. And if that’s the case, it certainly could enhance the accuracy of the pattern.

There are many ways you could go about using volume, and here are some of our favorite ways:

All the above are quite general filters, but if we take a closer look at the bullish abandoned baby pattern, we could come up with conditions that are made with the pattern in mind.

One good example of this would be to require that the doji, which is the second candle in the pattern, is formed with much more volume than the preceding and following bars. That could signal that we’ve seen a so-called volume blowoff, which often forms when the market faces a trend reversal.

Below you see an example of a bullish abandoned baby, where the doji forms with high volume. 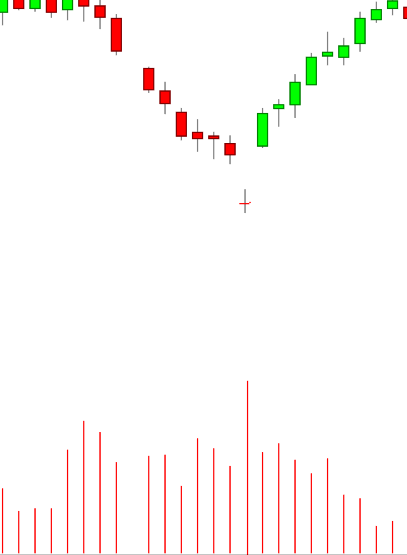 Another thing you should try, is to compare the volume of the first bar to the volume of the third candle. Since you want the market to act with more conviction once it carries out bullish moves, it could be beneficial if the last candle is formed with higher volume than the first!

Now, as with everything, what works best depends purely on the market and timeframe that you trade. Very often it also varies with the type of trading strategy.

Having this said, these are our favorite ways to define low or high volatility conditions

By comparing the bar ranges of the pattern to the ranges of previous bars, you get a sense of the market mood at the time when the bullish abandoned baby was formed.

The easiest way to measure the ranges in a market, is with the average true range indicator (ATR), which is just a simple moving average of the bar ranges.

ADX is one of our favorite trading indicators. It’s used to measure the strength of a trend, with readings above 20 signaling a strong trend, and readings below 15 indicating a calm market.

While the default setting for the indicator is 14, you should definitely experiment a little with other lengths, to see what works best with your strategy and market. In our tests, we’ve found that ADX with a length ranging between everything from 3 to 50 could work well!

As you see there are many ways you can gauge the volatility level of a market, and while they’re quite similar, they could yield quite different results. In other words, be sure to test them all to see what works best!

Again this is best done with the help of backtesting.

Now that we have mentioned a couple of ways that you could improve the pattern, we wanted to show you some practical examples of trading strategies that rely on the bullish abandoned baby.

Just remember that the trading strategies mentioned here aren’t mean for live trading, but to serve as inspiration. What works for you will depend on the market and timeframe traded, which means that we can’t give you a definitive answer to what works and not.

Having said that, the methods below show how we would go about to try and build a trading strategy with the bullish abandoned baby pattern!

One integral part of the bullish abandoned baby that sets it apart from other similar patterns, is that it performs two big gaps.

Now, the size of the gap could be of interest for us to measure, in order to gauge if the trade is worth taking or not.

And in this strategy, we’ll only take a trade if both of the gaps are bigger than the average true range. In effect, what we are looking for, is that the market performs a big blowoff and recovers, which takes the shape of the bearish and bullish gaps.

So the rules to go long become: 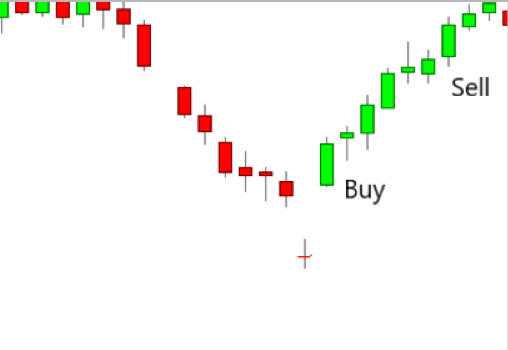 Now, since a bullish abandoned baby is believed to occur after a market has gone down for while, it could be relevant to measure HOW MUCH it has gone down. Typically, markets like stocks have a tendency to perform exaggerated moves, that are then corrected. And if we find a way to know when the market has moved too much to the downside, we could use it to know when it’s worth entering a trade.

One of our favorite ways to do this, is to use the RSI indicator. Generally, when the RSI shows low readings, it’s an indication that the market is oversold, and soon will turn around.

And that’s what we’ll use in this strategy. We’ll require that the 5-period RSI is lower than 30 to act on a bullish abandoned baby. However, we must use apply the condition to the second bar, since that’s the low point for the pattern as a whole.

So, the conditions to enter a trade become:

Then we’ll exit using the RSI once again. We get out of the trade once RSI crosses over 80. 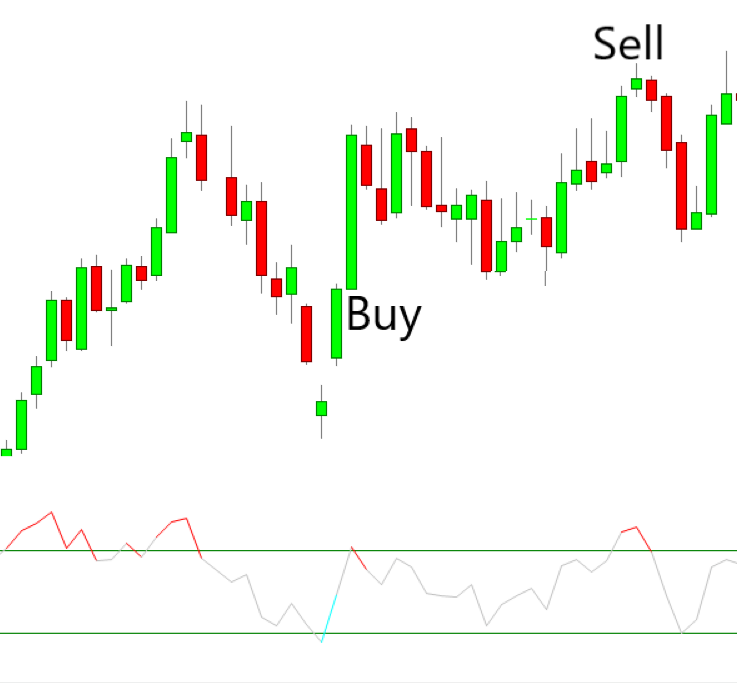 If you’re interested in knowing more, then we recommend that you take a look at our guide to the bearish abandoned baby pattern.

As a piece of final advice, we recommend that you ALWAYS TEST EVERYTHING ON HISTORICAL DATA BEFORE YOU TAKE A TRADE! Knowing what works and not is extremely hard, and you will be surprised to see how much of what you’ve read online that’s not working.