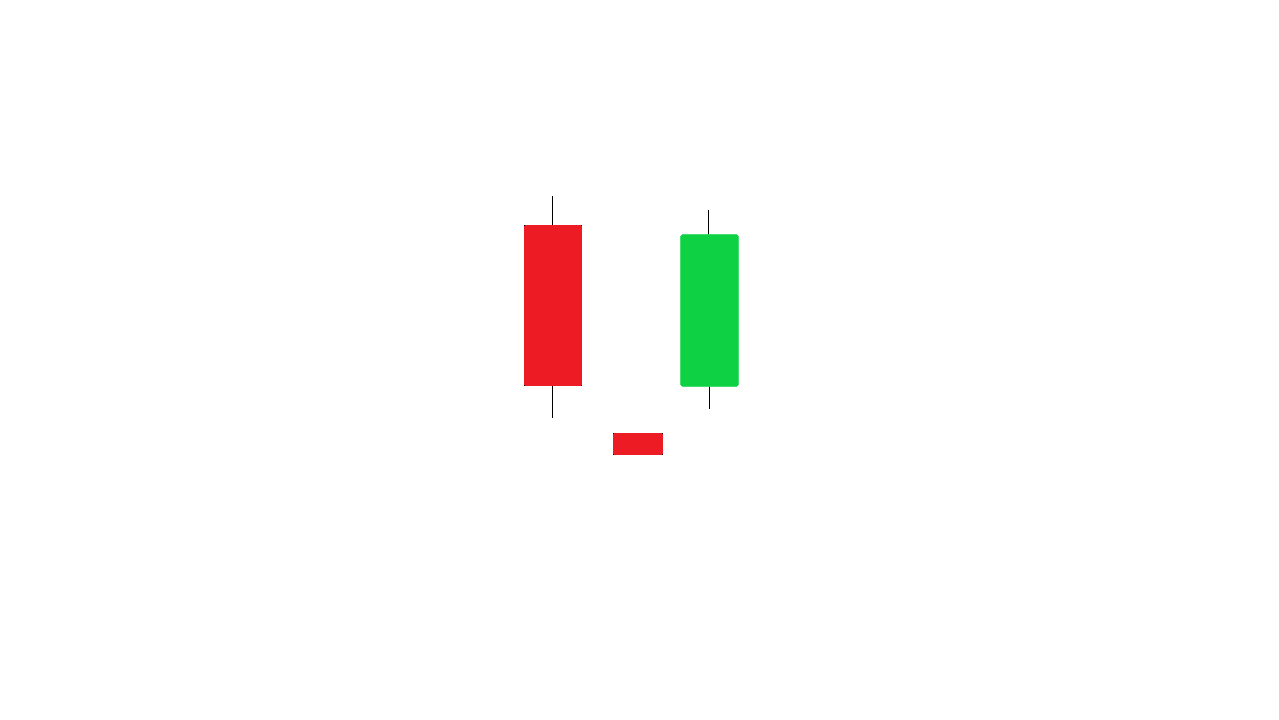 A morning star is a three candle reversal candlestick pattern that forms after a downtrend. The first candle is bearish and followed by a doji that gaps down. The third candle gaps up and finishes as a big, positive candle.

In this article, we’re going to have a closer look at the morning star candlestick pattern. We’re going to look at its meaning, how to improve the profitability of the pattern, and also have a look at a few example trading strategies.

How to Identify a Morning Star 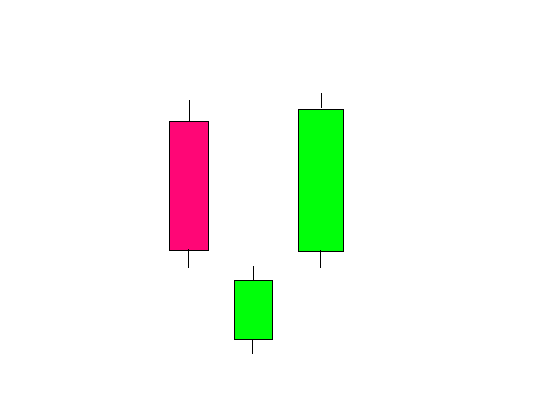 For a morning star to form, the following conditions must be checked.

What Does a Morning Star Mean?

The morningstar pattern is a bullish reversal pattern, which means that it is believed to appear in a bearish trend and signal that the market is becoming more bullish.

What Does a Morning Star Tell Us About the Market?

All candlestick patterns have their own stories and tell us something unique about the market.

While it certainly is hard to know exactly why a market moves as it does, it indeed is good training to try and understand why.

So let’s try and do that with the morning star pattern!

When the market comes from the bearish trend, most market participants believe that it’s going to continue down. The market sentiment is bearish, and most people are either short or out of the market waiting for better opportunities.

As the first candle of the morning star forms, the widespread notion holds true. The market perform another negative day.

Once the second candle opens, the market seems to be headed for another losing day, since it gaps down.

Now, since the market has gone down quite a lot, some market participants begin to turn bullish. They assume that a turning point must be coming, since it has continued down for quite some time.

As such, buying pressure increases and makes it harder for bears to continue pushing prices lower. The market closes around where it opened, creating a Doji-like candle.

The third day confirms the newly found market strength. The market gaps up, and more people turn bullish, wanting to get in in anticipation of the next uptrend. As a result, the third candle becomes positive.

Here are two examples of the morning star pattern 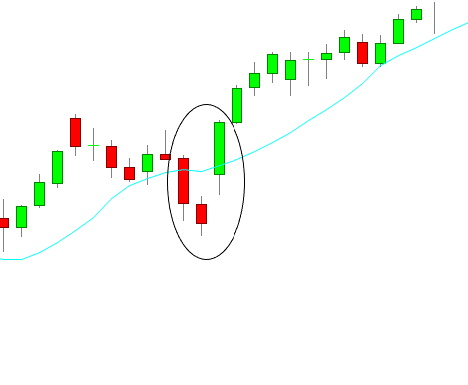 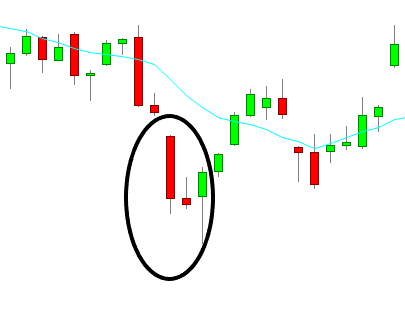 In general, you shouldn’t use candlestick patterns like the morning star on their own without some sort of confirmation. The edge, if there is any, simply tends to bee too weak, and you’ll need to introduce additional filters to improve the profitability of the signal.

In this section of the article, we wanted to show you a couple of filters that we have had great experiences with when it comes to improving trading strategies.

However, just remember that in order for a pattern to work, you will have to apply it to a timeframe and market that shows promise. We recommend that you use backtesting to ascertain where the edge lies!

One of the most universal concepts there is in trading, is volatility. The behavior and characteristics of a market vary greatly depending on the current volatility level. For example, you may find that some patterns only work in either high or low volatility environments.

To measure volatility, we like to use the ADX indicator, and it’s part of many of our trading strategies. Traditionally, a market is considered volatile when the ADX goes above 20 when used together with the standard length, which is 14.

However, if you use shorter lengths, you will have to adjust the threshold a bit. This is because the shorter length you use, the more quickly the ADX reading will surge and fall. As such, with the ADX-length set to 5, you could have readings that very well go above 70.

If you want to know more about ADX, we cover everything you need to know in our guide to the ADX indicator.

To keep it clear, here are a couple of conditions we use a lot ourselves for patterns like the morning star. Have a look!

Volume is a great complement to price data which adds a lot of valuable information to your analysis. By including volume, you get to know not only what the market has done, but also the conviction of the market.

One thing that could be interesting to test, is to compare the volume of the middle candle to the other bars. If it has very high volume, then it may be a so-called volume blowout, meaning that the market is depleted of the last bullish strength, and will head down as a result. In that case, the last candle becomes a sort of confirmation that the new bearish trend has begun.

Here are a couple of ways that we normally go about to include volume in our strategies. Have a look, and see what works best for your market and timeframe!

There are many seasonal tendencies in the markets that you can use to improve your trading strategies. For example, you will find that a lot of markets have some days that are more bullish or bearish than others.

Here are some different things you should look for:

If a morning star occurs during a period that’s typically very bullish, and the market still is in a bearish trend, you may want to take that pattern more seriously, since you know that seasonality is likely to help the trade in your direction.

In this part of the article, we wanted to show you a couple of trading strategies that make use of the morning star pattern.

Just remember that these are not made with live trading in mind, but to give you a couple of examples that hopefully will ignite your own creativity. Many of our own strategies aren’t more complicated than those below, and if we were to create new strategies, we certainly would try the things we include below.

Now, if we only could give you one piece of advice only, it would be to learn backtesting and test your strategy ideas on historical data. Doing so you see the performance of a strategy BEFORE you trade it, which will save you a lot of time and money!

As we said earlier, the morning star pattern occurs after a bearish trend and signals a bullish market reversal.

Now, spotting when the market has gone down visually might seem like an easy task. However, we prefer to use some sort of quantifiable filter or condition, to know for sure that the market has entered oversold territory before we take a signal. And the filter we’re going to use for this strategy example, is the Bollinger bands indicator.

In addition to this rule, we’ll also use the Bollinger band indicator in one more way.

Since the Bollinger bands expand and contract with the volatility of the market, it means that we can measure the ratio between the upper and lower band, and use it as a measure of volatility.

We’ll only enter a trade if the ratio (upper band divided by lower band) is higher than 1.1. It ensures that the lower band is located quite a distance from the middle band, which means a stronger oversold signal once it’s crossed.

Then we’ll exit the trade once the market crosses above the middle Bollinger band. 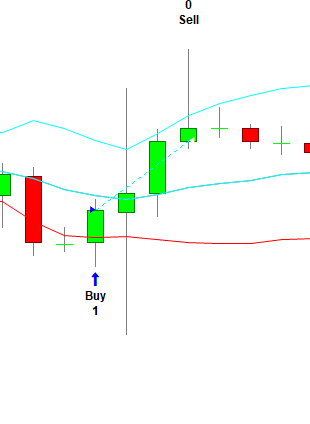 Another great way to define when the market has gone down enough for a morning star to be worthwhile, is with the RSI indicator.

RSI indeed is one of favorite trading indicators, and we use it in many trading strategies. It’s great at detecting momentum, as well as oversold or overbought markets.

However, while it’s used with a 14-period length by default, we’ve had the best results with far shorter settings. 2-7 for the length has shown a lot of merit in our tests.

In this strategy, we’ll use RSI to define when the market has fallen enough. We’ll simply use a 5-period lookback, and demand that the RSI is below 30 to take a signal.

As with the Bollinger band filter, we will use the RSI reading from the second bar, so that the final bullish candle doesn’t inflate the reading.

So, our rules for this strategy become that we go long if:

Then we’ll exit the trade once the RSI crosses above 80. 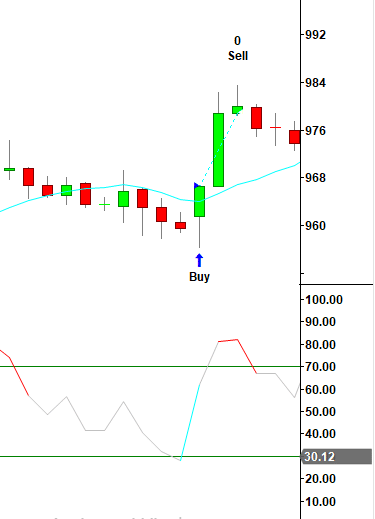 In this article, we’ve had a look at the morning star pattern, its meaning, the definition, and also provided some tips on how to improve the profitability of the pattern.

In addition to this, we’ve also had a look at a couple of trading strategies that use the morning star pattern.

Before we end, we just wanted to give some quick advice. DON’T TRADE ANYTHING YOU HAVEN’T TESTED YOURSELF. The trading world is littered with technical analysis that doesn’t work. And if that wasn’t enough, there is no universal pattern that works across all markets and timeframes. You must use backtesting to discover where the real edge lies. This is something that’s discussed in further detail in the following two articles:

How to build a trading strategy