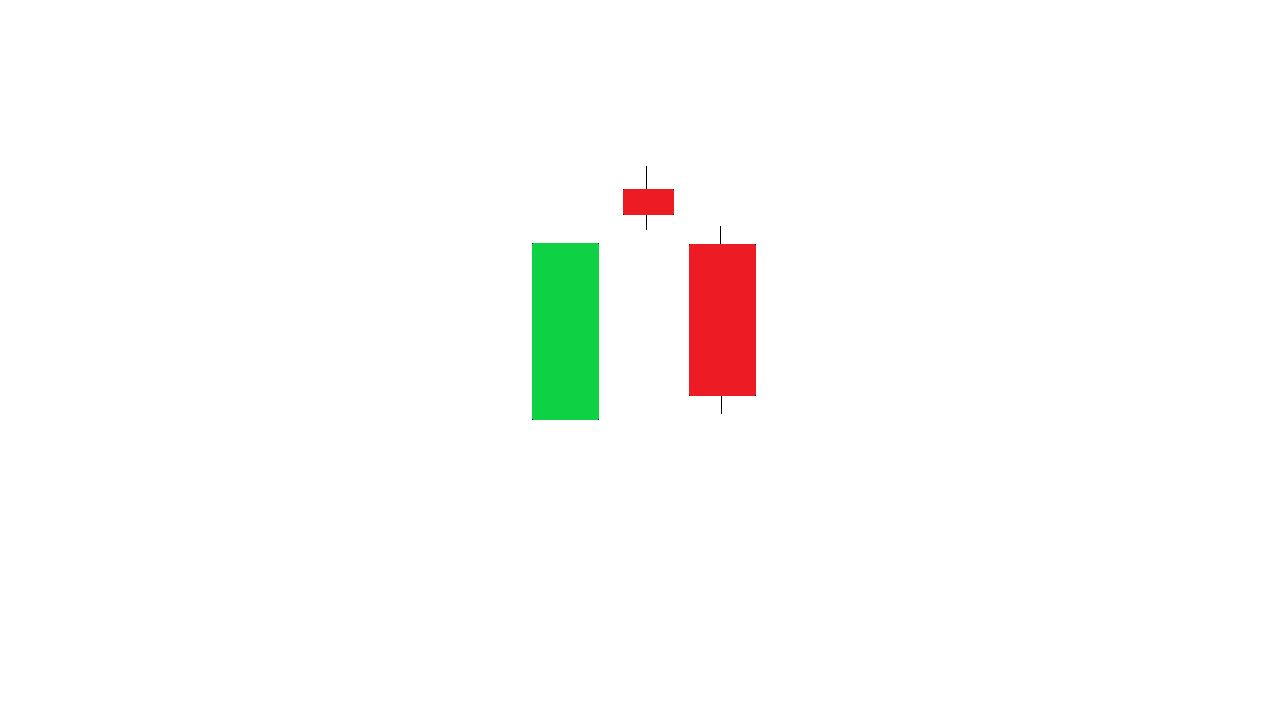 Candlestick patterns are among the most used and popular chart patterns you can find today. One quite famous pattern is the evening star.

An evening star is a three candle bearish reversal pattern that forms after an uptrend, and signals that the bullish trend is coming to an end and will give room for bearish developments. As to the appearance, the first candle is bullish, the second a doji that gaps up, and the third candle gaps down and closes lower than it opened.

In this article, we’re going to cover the evening star pattern and related topics such as how to improve the pattern and trading strategies. 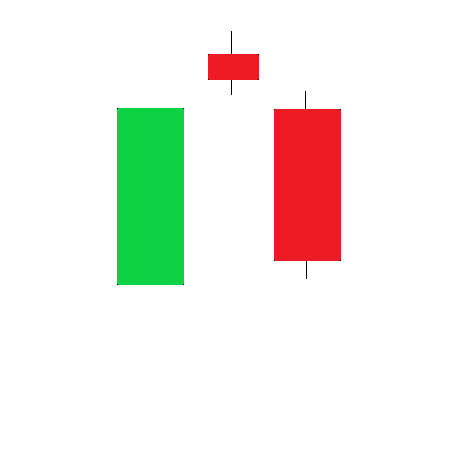 As outlined in the introduction, an evening star follows a bullish trend and signals its reversal. Here are the criteria that have to be met for a pattern to become an evening star.

What Does an Evening Star Tell Us About the Market?

As candlestick patterns are representations of market data, they give us some insight into how the market has acted, which is what we use when trying to predict where prices are heading.

Now, knowing why the market moved as it did, or why, is almost impossible. However, trying to figure it out is a great exercise in coming up with ideas for trading strategies and improving your understanding of the markets.

So let’s try and depict a scenario where the market formed an evening star!

As the bullish trend uncovers, most market participants are bullish and believe in the continuation of the bullish trend. As such, they’re long in the market or may decide to get in if they’re still flat.

With more capital entering the market it fuels the bullish trend, and as the market opens the following day traders and investors stand ready to buy and push the market further up. As a result, the day turns into a tall and positive candle.

Market sentiment stays strong, and the following day opens with a gap to the upside. Buying pressure once again starts to push prices higher. However, having been in an uptrend for quite some time, more and more people are becoming worried that the market has gone too far, and will revert soon.

As such selling pressure builds up and pushes the market back below the open. Now, bulls wake up again sensing that the market has become too cheap. With diminishing power they just manage to get the price back where it opened.

The indecision that’s shown in the second candle, coupled with the down gap and negative candle that follows, becomes a sign that market sentiment has shifted and become bearish. 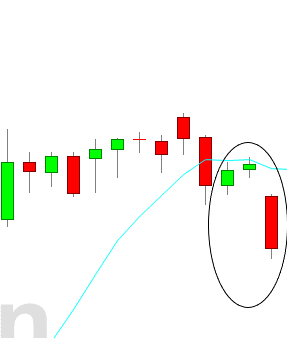 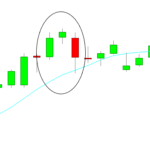 While candlestick patterns like the evening star are said to be reversal patterns, on their own they’re not accurate enough for us to act on. We need additional filters or conditions to validate the signal, and remove a lot of bad trades. In addition to this, it’s important to use the evening star with the right timeframe and market. We recommend that you use backtesting to ascertain the best markets and timeframes for the pattern.

With all this said, we wanted to share with you some of the filters and conditions we’ve used with great success in our own strategies. Let’s begin!

Perhaps the most popular way to trade the equity markets, is by trying to identify oversold and overbought conditions. In essence, you try to get a sense of when a market has moved so much that it will turn back soon. This is the logic behind mean reversion, which is the behavior we’re trying to catch!

With the evening star, we might choose to only take a trade if the market has entered overbought territory, meaning that it has moved excessively to the upside.

Now, oversold conditions can be defined in a number of ways, but here follow some of our favorite methods:

One thing to keep in mind is to apply conditions like these to the second candle of the pattern and not the last. That’s because the last candle in effect is the start of the new trend, meaning that our condition might be true before it’s formed, but not after. For example, the RSI may peak at 80 on the second candle of the pattern, but then quickly turn down as the last bearish candle forms. In such cases, we would miss a lot of relevant signals!

In addition to the price data, there are other types of data streams you might benefit from taking a look at. Market breadth or sentiment data is an often overlooked information source that could act as great filters!

In our article on market sentiment indicators, we have a closer look at some of these indicators and data streams, so be sure to check it out!

However, let’s name some of the most popular market breadth indicators, and how they work!

The ADR means gives a better view of the general market mood and could help in deciding whether an evening star is worth taking or not.

Make sure to experiment and see whether a low or high ADR reading works best with your timeframe and market!

As such, you might want to consider taking an evening star only if the VIX is in an uptrend, signaling that market participants are becoming more bearish.

Here is our massive guide to VIX that covers everything you need to know about the volatility index!

3. Use Seasonality and Time-based Filters

Most markets have some form of seasonal or time-based tendencies, meaning that they are more bullish or bearish at certain times. It could be that the market is more prone to going up on certain days of the week, parts of the month, or at certain hours of the day.

Knowing these types of tendencies, which are best discovered through backtesting, will help you know when there is a higher chance that a pattern you spot will work out well.

For example, let’s say that you trade a market that tends to perform worse in the second half of the month. If then you spot an evening star around the 15th, you can be a little more certain that it will work out well.

The morning star pattern is another well-known reversal pattern, and basically it’s an inversed evening star.

However, in contrast to the evening star, it’s a bullish reversal pattern that forms after a downtrend.

Here you may read more about the morning star candlestick pattern.

As we mentioned earlier, one great method to know when the market is overbought is to look at the price in relation to the upper Bollinger band. If the price is higher than the upper band, the market has overextended itself to the upside, and we can expect it to soon turn around, being typical behavior of a mean-reverting market.

However, what not that many people think of, is that the location of the upper or lower Bollinger band is dependant on volatility.

If volatility is high, the bands will be farther away, and the other way around.

As such we might want to only take an evening star above the upper Bollinger band if the ADX is over 20, which signals high volatility. Then we know that the market has moved a significant distance to the upside.

So, the rules for this example strategy become that we go short only if:

To exit a trade, we wait for the close to cross below the middle Bollinger band. 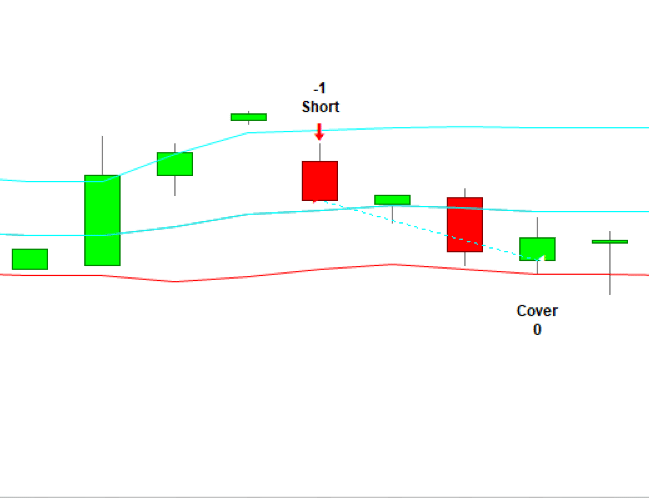 In this strategy example, we use volume in an attempt to filter out bad trades.  By demanding that the Doji is formed with more than twice the volume of the preceding bar, we assume that a volume blowoff manages to deplete the last bullish strength in the market.

So the rules for this strategy become that we go short when: 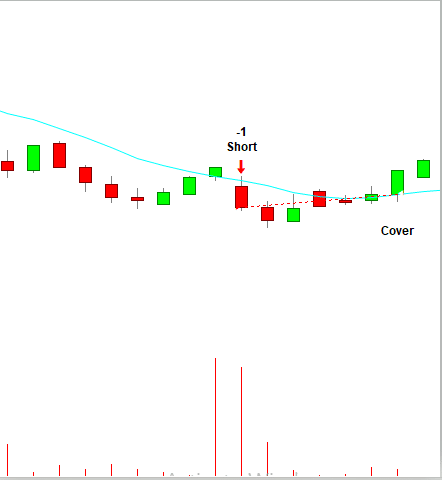 In this article, we’ve covered the evening star candlestick pattern. We had a look at its meaning, definition, and also covered how you could go about to improve the profitability of the pattern.

Before we end, there is one last thing we think you should know.

Be sure to TEST EVERYTHING ON HISTORICAL DATA, before you trade it live. Most technical analysis doesn’t work, and many traders will start their trading careers trading things that lead to losses.

We recommend that you have a look at our article on how to build a trading strategy, and our guide to backtesting to find out more.