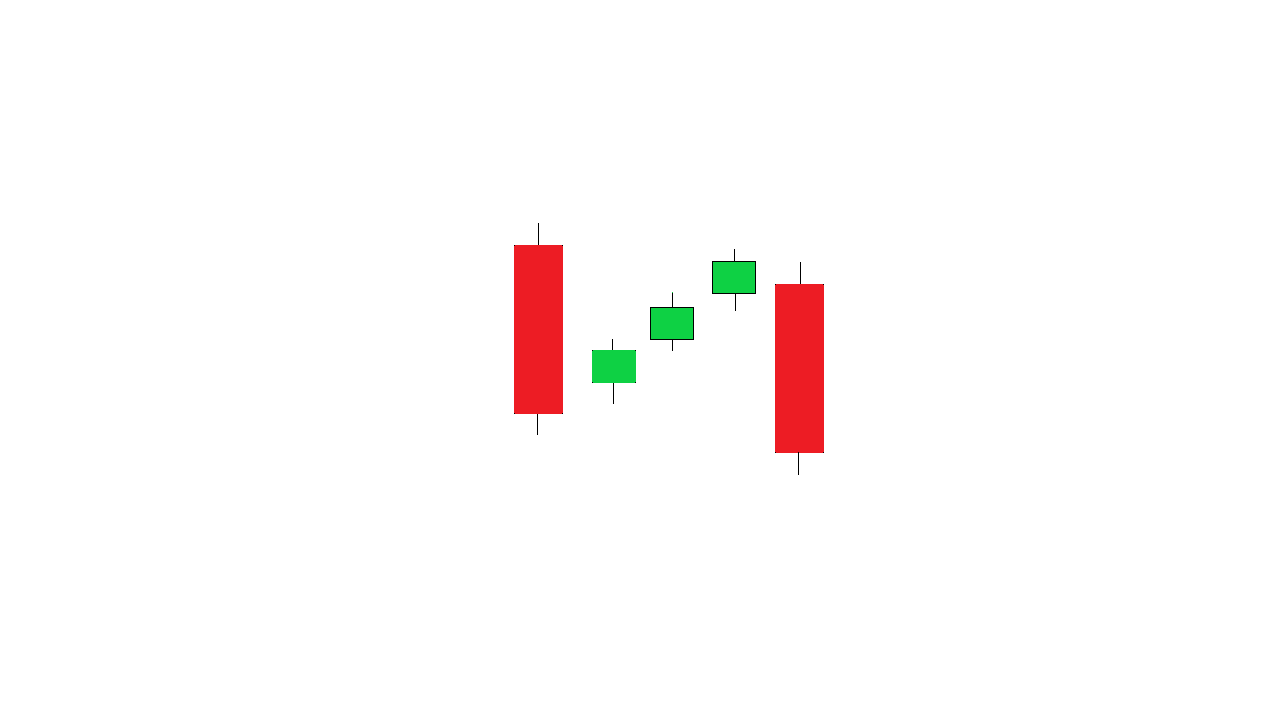 Candlestick charting has become the preferred method of charting for many traders. Their colorful bodies make it easy to spot market action and patterns, that could hold predictive value. One candlestick pattern is falling three methods.

Falling three methods is a bearish continuation candlestick pattern that forms in an existing downtrend, and signals that the current bearish trend is persisting. The falling three methods pattern consists of 5 candles. The first candle, which is a tall bearish one, is followed by three smaller positive candles, that are confined within the range of the first candle. The last candle is a tall bearish one, that pierces the low of the pattern.

In this article, we’ll have a closer look at the falling three methods candlestick pattern. We’re going to cover its meaning and definition, and also show you a few example trading strategies that make us of the pattern. 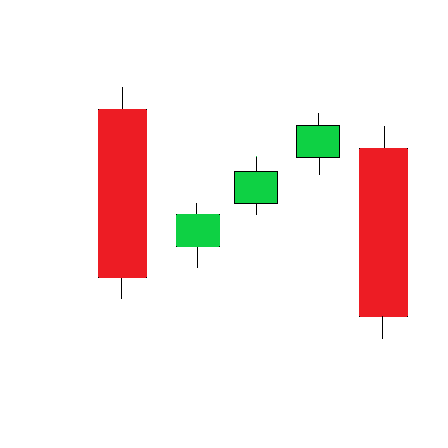 Here are the conditions that need to be met for a falling three method to form:

Each candlestick pattern tells us something about the market, how it acted, and perhaps why it acted as it did. And while it might be hard or impossible to know the exact reasons why the market moved as it did, analyzing patterns in an attempt to understand their meanings, is a great exercise that will help you form an understanding of the market.

So, here is what might happen in the market as the falling three methods is forming.

Coming from a bearish trend, market sentiment is mostly negative. As such, selling pressure surpasses buying pressures, and the market forms a long, bearish candle.

As the next day opens, the tables are turned, at least to some extent. Buyers seize power upon sensing that the downtrend might have come to an end, and initiate an attempt to push the market higher.

The following three days, buyers manage to push the market upwards, bit by bit. However, sellers still stand strong, and won’t let the market move more than small bits at a time. The result becomes three small bullish candles, that don’t manage to break out over the resistance found at the high of the first bearish candle.

When the third day comes to an end, it’s obvious that the market didn’t have the strength to break the downtrend, and that sellers still are in control. Upon realizing this, more people get bearish on the market, and decide to exit their long positions or go short.

An avalanche of sell orders hits the market and creates a long bearish candle. As it breaks the low of the pattern, we get a clear signal that the bearish trend isn’t done just yet, and that we should expect the price to hit new lows. 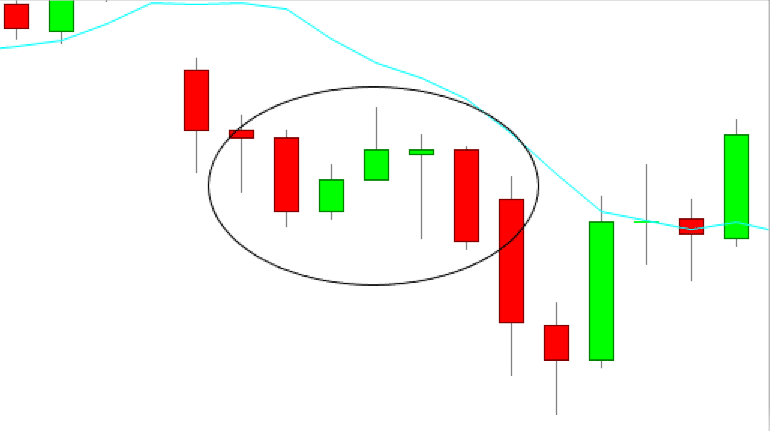 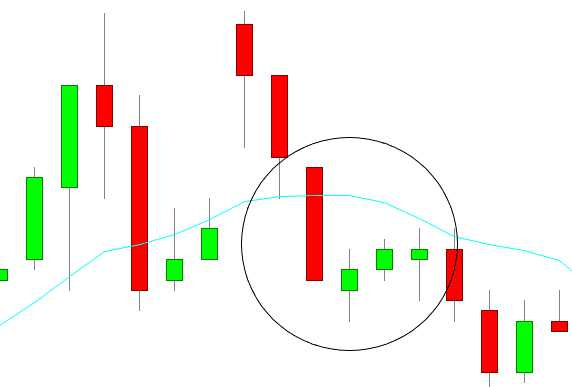 Most traders who use candlestick patterns like falling three methods in their analysis successfully, don’t use the pattern as is. They apply different kinds of filters and conditions in order to create something that’s tradable according to their criteria.

In this part of the article, we wanted to share some ways to filter out bad trades, so that you only take the ones that have the best chance of success. The filters we’re going to share with you already are part of many trading strategies we trade right now, albeit perhaps not in conjunction with the falling three methods.

Just be aware that for the pattern to work well, you must make sure to apply it to a market and timeframe where it works well. We recommend that you use backtesting to get a better sense of what markets and timeframes that are worthwhile and not.

Having said this, let’s get to the filters!

1. Delaying the Signal and Waiting for Confirmation.

This is a method we have used a few times, and had some quite interesting results with. In short, the idea is that we delay the signal, and wait a bit before we enter the trade.

The reason is that there sometimes might be a lag between that the pattern forms, and that the market starts to head up or down. And if that’s the case, we’d better wait some time before entering.

For example, it could be that a falling three methods indeed precedes a continuation of the bearish trend, but that the market tends to head a little higher first. Then we’d like to skip that ascending part, and only be in for the downtrend. As such, we might decide to get in 5 bars after the forming of the falling three methods.

Now, what you also could do here, is to look where the market has headed a certain number of bars after it formed the pattern. Then, if it stands higher or lower, you could draw some interesting conclusions. For instance, a falling three methods might only hold an edge if the market continues down right after it’s formed. If that’s the case, you could just wait a few bars, see which direction the market went, and decide to short only if it went down.

Once again, do determine what works best for your market and timeframe, we recommend that you use backtesting.

Another quite effective way of determining the accuracy of a pattern like the falling three methods, is to use measure the ranges of the bars. To some extent, the range of a candle shows the conviction behind the move. For example, if the market believes that the price of a security is too low, few will be willing to sell at the current price. As such, the market will ascend as long as there isn’t enough supply at the current price.  And if the market makes a big move, it indicates that buyers were very keen to get in, while sellers didn’t want to let go of their positions.

When applying the above to the falling three methods pattern, we want the bearish candlesticks to be tall, and the bullish ones to be short. That would signal that the market participants were more keen on selling than buying, thus indicating bearish market sentiment. Below is an example of what a pattern with big bearish candles and small bullish candles could look like: 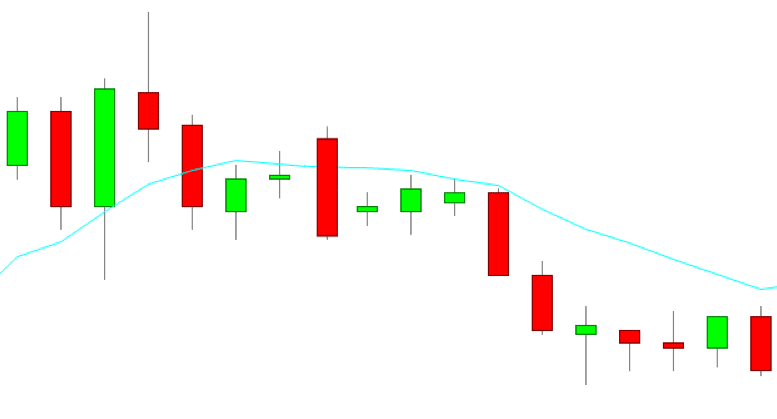 When we look at a price chart, we only see how the market has acted. While this is extremely useful information, we might want to supplement our analysis with some more data.

By also watching volume, we get a better sense of the overall conviction of the market. We get to see how many contracts or shares that we’re exchanged at any given time, which to some extent tells us how many people actually moved the market. In general, the higher the volume, the more significance we can ascribe a pattern.

Please keep in mind that the systems below aren’t ready to be traded right away. You will have to tweak the system to make it work with your market. And most important of all, find a market where the falling three methods pattern actually works.

Having mentioned this, let’s get to the example trading strategies!

Volatility can have a great impact on the performance of a pattern. Many times, you will find that your trading idea might only work in either low or high volatility environments.

A great way to determine the current state of the market, with regards to volatility, is with the ADX indicator. Generally, a reading above 20 suggests that a market is volatile, while a lower reading suggests the opposite.

In this strategy example, we’ll use the ADX to only take trades when the market is coming from a relatively calm bearish trend. Thus, we’ll be requiring ADX to be below 20.

However, we won’t measure ADX beginning from the last candle on the chart. Instead, we’ll offset the calculation by 5 bars back in time, so that the falling three methods isn’t included in the calculation. The reason is that we’re only concerned with the preceding market trend, and not the pattern itself.

So the rules for this strategy become that we go short of:

We’ll get out of the trade after 5 bars. 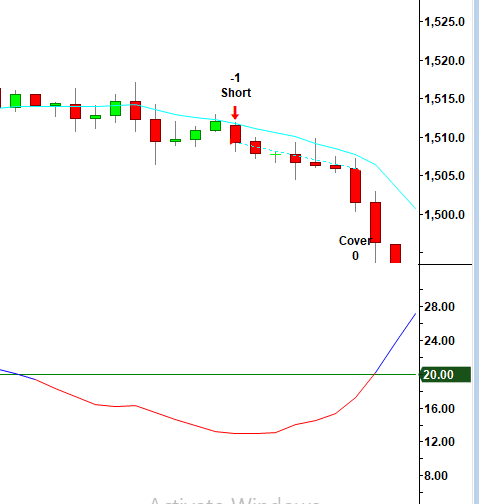 The RSI indicator is normally used to measure absolute levels only, but you could also use it by comparing different readings to each other.

If you remember, the last bearish candle of the falling three methods pattern should pierce the low of the pattern as a whole. Now, we could try to demand the same from the RSI indicator. That is, the RSI should perform a new 5 bar low upon the last bearish bar, for us to go short.

So, the rules for the strategy are that: 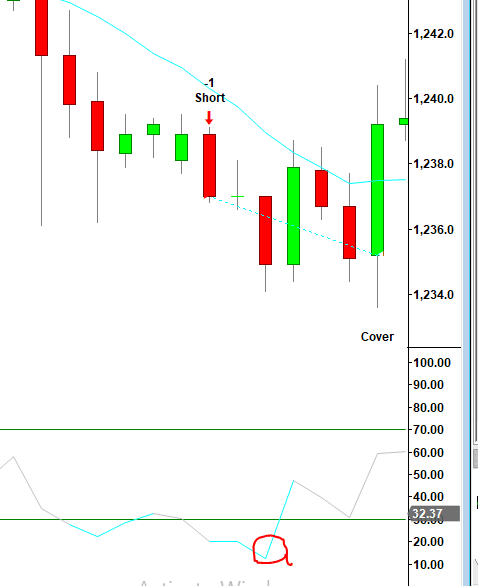 In this article, we’ve covered the falling three methods pattern. We’ve had a look at its definition, meaning, and trading strategies that hopefully will be of help when you build your own strategies.

Now, there is just one more thing we want to say before ending:

Test everything on historical data before going live. You would be surprised how much of the technical analysis out there that doesn’t work at all. You need to carry out your own analysis before you start trading a strategy or pattern. Otherwise, you will end up as nearly everybody else, and lose in the markets.