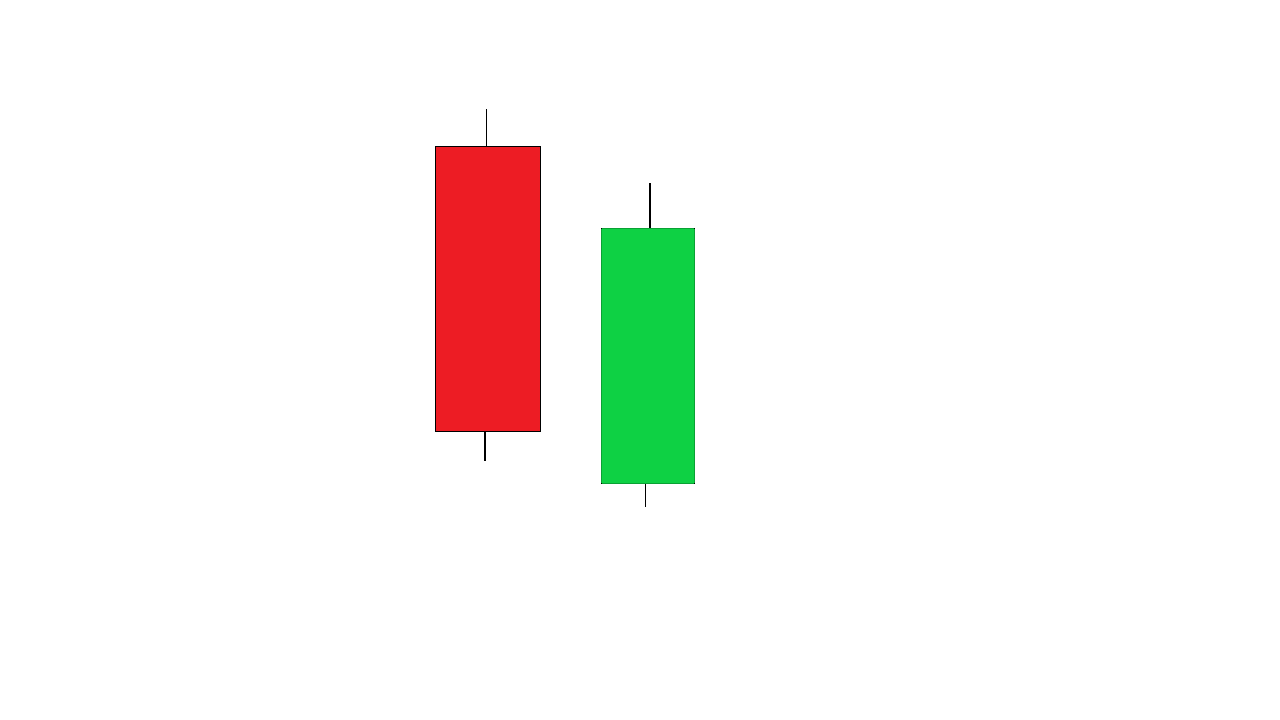 Candlesticks are perhaps the most popular charting method out there, and especially get the attention of new traders and investors. Their colorful bodies make it easy to gauge price movements, and combined they form easily recognizable patterns. One popular candlestick pattern is the bullish piercing line, which is the topic of this article.

In this article, we’ll cover the meaning of the bullish piercing line, how to enhance the pattern, and some example trading strategies.

How to Identify a Bullish Piercing Line Pattern 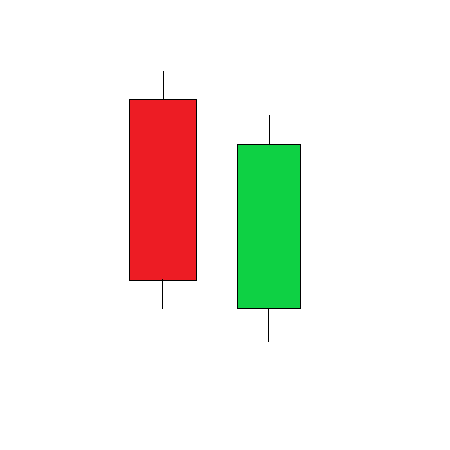 The bullish piercing line is a reversal candlestick pattern that’s formed after a downtrend.

Here is how you identify the bullish piercing line:

1. The first candle is bearish.

What Does a Bullish Piercing Line Mean?

Every candlestick pattern tells a unique story about what the market has been up to and could help us in our analysis of the market.

Here is the story of the bullish piercing line pattern:

The market is in a downtrend, and bearish sentiment is prevailing. Market participants expect the market to continue down, and so it does. This is when the first bearish candle is formed.

The next day the market gaps down and it seems like the bears are going to push the market down this day as well.

However, the market now has gone down so much, that more people begin to see a buying opportunity. As such, buying pressure increases and the market manages to cover the gap and close above the midpoint of the previous bearish candle, which by many is considered a resistance level!

The break of the midpoint signals that the market sentiment has started to shift, and that a bullish move might be imminent

Now, of course, every bullish piercing line is unique, and market explanations like the one above shouldn’t be taken too seriously. The reason why we’re sharing it with you is that you will learn a lot from thinking about market action in this way! 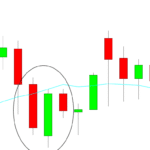 Here follow some examples of the piercing line pattern.

How to Improve the Bullish Piercing Line

When it comes to candlestick patterns like the piercing line, most traders would agree that you shouldn’t take a trade solely on the pattern itself. Most times you will need to add filters or conditions to remove a lot of false signals.

In addition to that, you need to ensure that you trade the pattern on a market and timeframe where it works, which is best discovered with backtesting.

However, below we wanted to share a couple of ways that we enhance patterns and strategies ourselves. The things we’re going to share with you are solutions that have proven themselves many times over in our own trading strategies!

Volatility can have a great impact on the performance of a pattern or strategy. Many of our strategies make use of some sort of volatility filter, and in the part about trading strategies, we’ll show you one of the volatility indicators that we’ve had the most success with.

However, one easy method to measure volatility is to watch the ranges of the candles surrounding the pattern. If you see a lot of tall candles with long wicks, then it quite naturally indicates a volatile market. And in volatile market environments, you might want to be careful with patterns like the bullish piercing line since they might form haphazardly as a result of the large price swings.

On the contrary, it could be the other way around as well. Sometimes a pattern that forms under high volatility is more accurate, since the pattern is bigger and thus more significant.

What works best depends on the market you’re trading!

2. Is the Market Overbought or Oversold?

You probably remember that a piercing line forms after a downtrend. While this might seem like an easy thing to spot on a chart, it’s easier said than done. As such, we can benefit from introducing systematic criteria to ensure that the market is oversold when we enter.

There are many ways you could define an oversold market. For example, you could use the RSI indicator (as we’re going to do in one of the strategy examples) or require the market to be at its lowest point 10 bars back. In general, the stronger the oversold signal, the more likely that the market will turn upwards soon!

If you’re using the bullish piercing line on intraday data you might want to include the time of day in your analysis.

Sometimes price patterns work well only between certain hours and sessions. A market can behave very differently at different times of the day.

To get a clear example, you just have to compare the market action around 08:30 when the American stock market opens to that one hour later. There are many daytrading edges that work well around the opening bell but not on other market hours!

If you’re testing this, we recommend to split the day into three halves and see how the pattern works on each half. If you see any significant differences, then you may exclude one or two time windows.

Now we wanted to share with you a couple of strategies that make use of the bullish piercing line.

Just keep in mind that these strategies are demonstrations only. They are meant to show how we would start making a trading strategy with the pattern. As such they are not meant for live trading, but will hopefully serve as inspiration!

Earlier in the article, we told you that we were going to have a look at a way to quantify volatility. One of the best ways we’ve come across is the ADX indicator.

The traditional interpretation of the ADX is that readings above 20 means we have a strong trend. The default length of the indicator is 14.

In our own testing, we’ve discovered that it also works well with a range of different values, from as low as 2 or 3, to perhaps 30.

In this strategy we’ll demand the volatility is high to take a trade. As such, the ADX must be greater than 20.

Here are the rules: 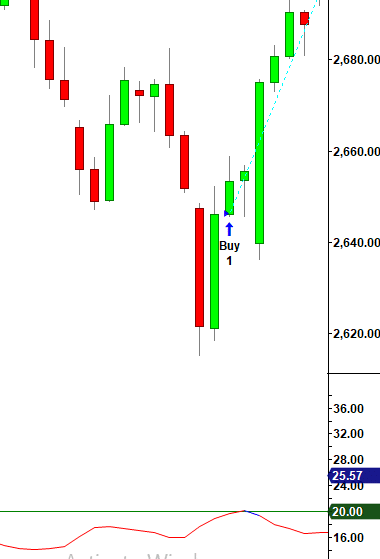 Another thing we mentioned was that you could use oscillators to identify when the market has moved down enough. Our favorite indicator for this is the RSI.

The traditional interpretation of the RSI is that readings below 30 are oversold, and above 70 are overbought. The default setting for the length is 14, but we dare to say that the RSI is pretty much useless with this setting. At least in our experience, a length around 2-10 works best by far.

In this strategy example, we’ll require that the 5 – period RSI is below 40 to take a signal. The strategy rules then become:

The exit will also use RSI. Our exit signal will be that the RSI crosses over 70. 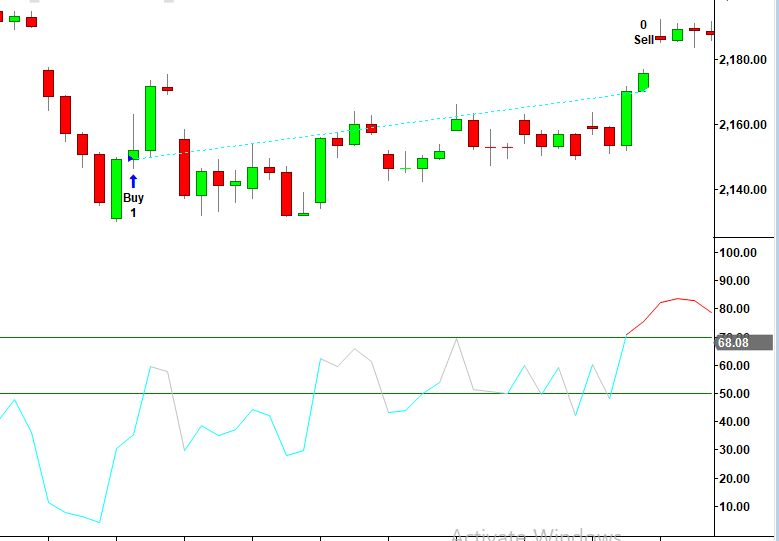 Our massive article on the RSI indicator might be of interest to you if you want to learn more about the RSI and its applications!

Another way to identify when the market has entered oversold territory is with the help of Bollinger bands.

Bollinger bands consist of three bands. The middle band is a moving average, around which an upper and lower band is drawn, both located 2 standard deviations away from the moving average.

As such, if the price moves below the lower band, we know that the market has overextended itself to the downside, and is likely to turn around soon.

Here are the rules for this strategy:

Then, we wait until the market goes above the moving average (the middle Bollinger band) to exit the trade. 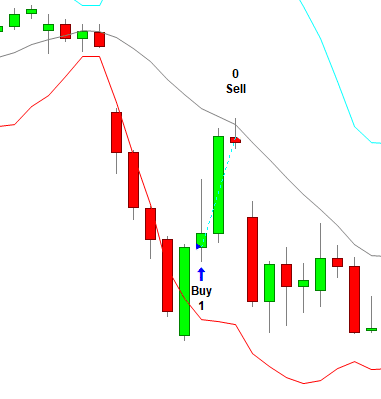 In this article, we’ve had a look at the bullish piercing line pattern and covered its meaning. We’ve also covered some strategy examples that we hope will spark ideas for your own trading.

We’d like to round off this article by stressing the importance of testing EVERYTHING on historical data before you start trading it! Most traders don’t do this, and that’s one of the reasons why they also remain losing traders!

If you want to find out more about testing and building strategies, why not have a look at our article on how to build a trading strategy!