Candlestick charts have come to attract many traders since their introduction to the western world in the late ’80s. There are many candlesticks to choose from, and all have their distinct meaning and character. The topic for this article is the dark cloud cover, which is one of the most widely known and used candlestick patterns.

In this article, we’re going to have a look at the dark cloud cover pattern, what it means and how you could go about to create your own strategies that make us of it!

How to Identify a Dark Cloud Cover 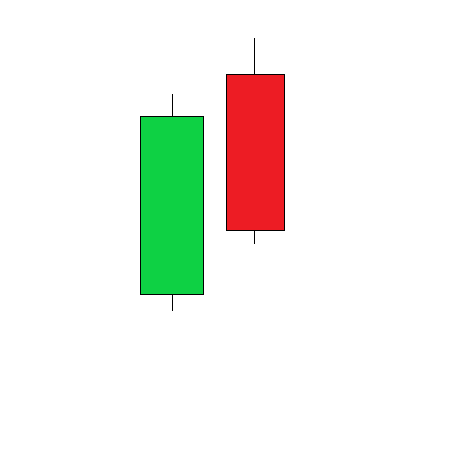 As said, the dark cloud cover is a bearish reversal pattern that occurs at the top of, or after an uptrend.

As to the pattern itself, this is what you should look for:

What Does a Dark Cloud Cover Tell Us About the Market?

Every candlestick has its own meaning and tells a unique story about what the market has been up to.

Let’s have a look at what a dark cloud cover tells us about the state of the market!

The market, which is in an uptrend is fuelled by the positive sentiment. The bulls are in control, and continue to push the market higher.

As the first bullish candle of the pattern forms, we notice that the buying pressure is strong, and that buyers continue to support the rising trend.

This sentiment is also carried on to the opening of the next day as the market gaps up. The buying pressure continues to make to market to go higher.

However, what is soon revealed, is that the positive gap depleted the market of its last share of buying power. The bears take control and push the price to cover the gap.

At that stage, selling pressure adds up as more investors start becoming worried that the market isn’t as strong as they believed. More and more people start selling their positions, and the market closes below the midpoint of the preceding candle.

Now, stories like these shouldn’t be taken too seriously, but they indeed help to understand how the market works and are great exercises! 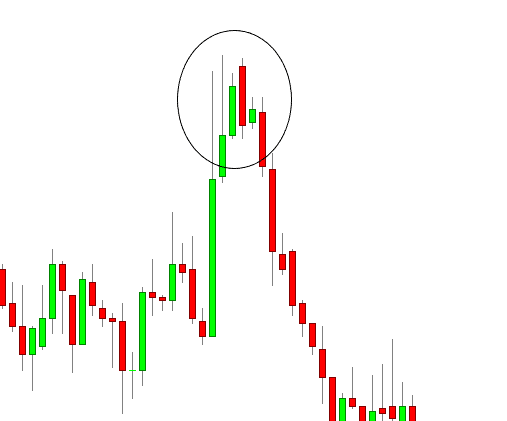 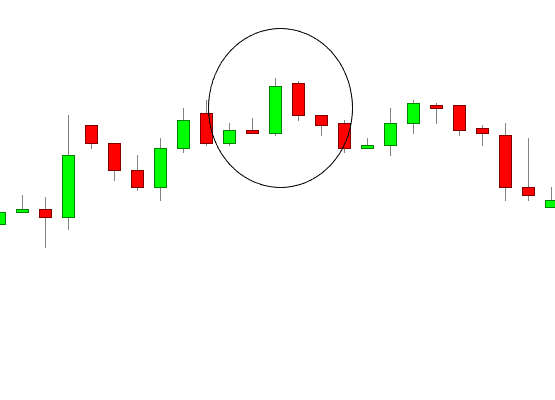 Most traders would agree that you probably shouldn’t take a trade based only on one pattern. Most times you will need to add a filter or additional condition to get acceptable results.

Here we wanted to show you some examples of how we work with different patterns in our own trading to make them worthwhile for us.

However, remember that what works and not is completely dependent on what market and timeframe you trade. So be sure to experiment on your own to see what works best!

One filter that we like to experience with is volume. When you just use price data, you get to know how the market moved. However, one thing you don’t see that well, is the conviction, or breadth of the market.

By using volume we get a sense for how many market participants that contributed to forming the pattern. This information could let us make some good approximations of the accuracy of a pattern, like the dark cloud cover.

There are many ways you could apply volume to the dark cloud cover, but here are two common ways:

With the first approach, you want to make sure that the dark cloud cover was formed with significantly more volume than the preceding bars in the uptrend. This shows us that many participated in forming the pattern. Another conclusion we could draw is that the market now has had a major volume blow off, which traditionally is a sign of a coming reversal.

The second approach is to only take the trade if the market was traded more heavily in the bearish candle than in the first bullish candle. This could be a sign that the market has changed its sentiment from bullish to bearish, which results in heavy selloffs from market players who no longer wish to remain in the market!

2. Look at the Size of the Candles

Another way to gauge the conviction of the market, is to look at candle ranges. By looking at the distance that buyers and sellers moved the market each candle, we get a sense of the general strength of the market.

As such, if a market is trending up and covers a greater distance with each bar that passes, we might want to be careful. The market shows strength and conviction, which indicates a strong trend that we might not want to go against.

However, if we see that the candle ranges diminish as the uptrend gets older, we could assume that the market is soon going to turn around. As such, we might decide to act on a dark cloud cover in that case.

Some markets have special days of the week or periods of the month that are better than others. If you explore these tendencies, you could take that into account as part of your analysis.

However, if you see that the bearish candle forms on a day that’s normally very bullish, you could perhaps be a little more certain when acting on the signal.

There are many ways you can use seasonality when trading patterns such as the dark cloud cover, so be sure to test what works best for you!

In this part of the article, we wanted to share a couple of trading strategy examples that use the dark cloud cover pattern.

However, remember that these strategies are not meant for live trading, but serve as inspiration when you build your own trading strategies! If we were going to try building strategies with the dark cloud cover, this would probably be how we would choose to start!

Since the dark cloud cover should occur after an uptrend, we might want to use some type of filter that reflects this.

With a moving average applied to the chart, we can easily see whether the price is below or above the average, and choose to only act on signals where we have an up-trend. That is when the market is above its moving average.

The benefit of using a moving average to determine the trend direction, is that we adopt a fully systematic approach to know when the market is trending enough for a signal to be worthwhile.

For example, sometimes the market might seem to be in a sort of uptrend, while it’s still not strong enough to be worthwhile. In such cases, the moving average helps by quickly showing us the state of the market trend.

Now, you could use many different settings for the lenght, but in this strategy example, we’ll go with 20.

We enter the market if:

To exit a trade we wait for the price to go below the moving average. 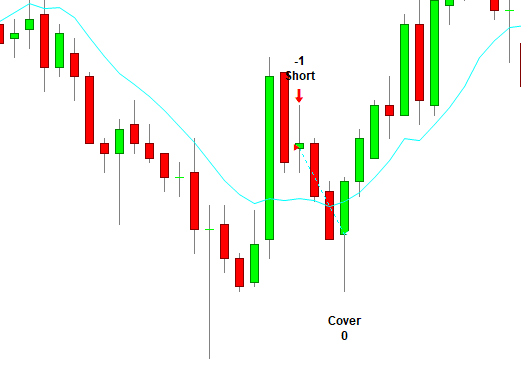 In our experience, one of the best ways to measure trend strength is to use the ADX indicator. That’s also what we’re going to do in this strategy.

In order to enter a trade, we require that the 14 – period ADX is above 20, which indicates a strong trend.

To exit the trade we make use of a time exit and get out of the trade after 5 bars. 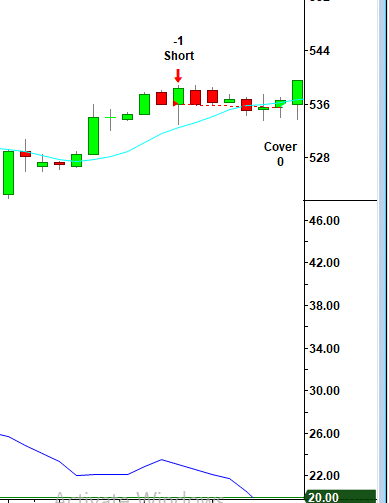 Here we use the RSI indicator to define when the market is in an uptrend and a dark cloud cover is worth taking.

We want to only take a signal if the market is overbought, so we’ll require the RSI to be over 70.

In our own testing, we’ve found the indicator to work well with a length of somewhere between 2-10. So we’ll use a 5 period RSI for our example strategy.

Here are the rules. We enter if:

Then, to exit the trade, we wait for the RSI to cross below 50. 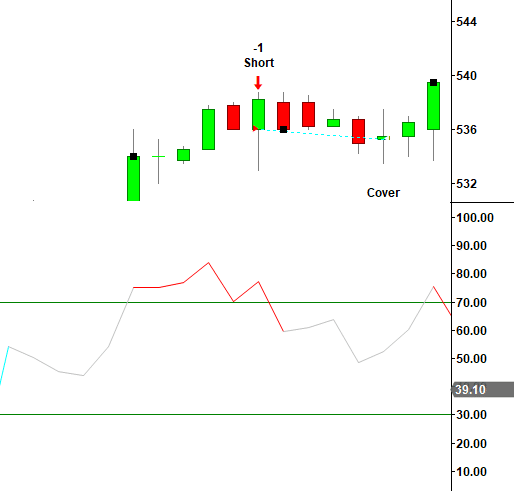 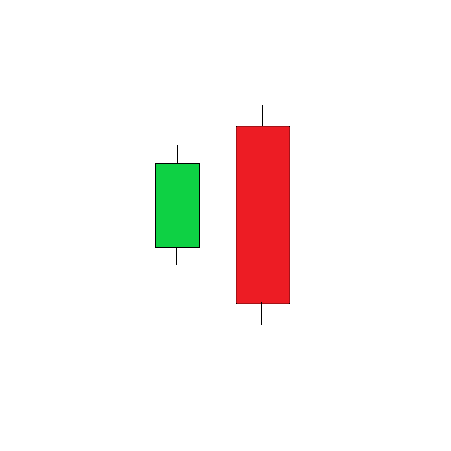 With that in mind the dark cloud cover, at least in theory, is a less powerful reversal pattern than the bearish engulfing pattern.

Here you can read more about the bearish engulfing pattern.

The dark cloud cover is a bearish reversal pattern that occurs after a downtrend. In this article, we’ve shown you how you can work with the pattern to improve its accuracy. We’ve also had a look at some strategy examples that use the dark cloud cover pattern.

In case you want to build your own trading strategies, we recommend that you read our article on how to build a trading strategy. There you’ll find a lot of valuable information about the testing process, and common pitfalls that could keep you from building robust and profitable strategies!