How Much Money Can You Make From Stocks In a Year? (Trading and Investing)

The amount of money you can make in one year from the stocks varies a lot depending on several factors. However, if you look at the highest return of the S&P-500 in one single year, you’ll find that the best performing year gave a return of 46%, which could be regarded as the upper limit of passive investing.

Let’s start off by looking at these factors!

What Factors Affect How Much You Can Earn?

Before going into the different factors, it’s important to mention that one year is a very short time period for most investors. Generally, the shorter the period you hold stocks, the more likely you are to experience outsize moves, which could be either a loss or a big profit. Stock prices simply vary a lot short term, but have a long term positive trajectory, if you look at the market as a whole.

With that said, these are the most significant factors that will affect your returns:

In other words, you could say that short term returns are more likely to go into any of the extremes of losses or profits, especially if you go for the less secure and stable options.

Being diversified, meaning that you own stocks in different market sectors and industries is good way to reduce risk.

However, the more different stocks in varying market sectors you own, the closer you’re getting to a market average. You’re simply exposing your portfolio to a broader share of the economy, which statistically will ensure that your return gets closer to the market average.

This has the effect of making outsize winning or losing years less probably, even though the market as a whole does have some big moves now and then.

Of course, leverage plays a huge role in determining your returns. Quite logically, your returns (or losses) will be doubled if you own stocks with 2 times the leverage.

In a market downturn, the bearish forces tend to affect most stocks, even if their business models might not be severely affected by the downturn itself. It’s all a very psychological phenomenon, where the turmoil begets more turmoil, leading to a lot of irrational decisions being made, with most stocks being dragged down. Conversely, if the market sentiment is mostly positive, it tends to spill over to most stocks and act as a positive force.

This is an aspect that’s often forgotten. When investing in stocks for shorter periods of time, the results you get are generally influenced more by luck and randomness than if you would hold for longer periods. This also applies to the number of stocks you hold. The fewer stocks you have, the bigger the impact of luck and randomness on your results.

Having covered some of the aspects that affect how much money you can make on stocks, let’s cover the main question in more detail!

How Much Money Can You Make in Stocks In a Year?

So, the answer varies a lot depending on your approach. For instance, being an investor is quite different from being a trader. That’s why we’ll look at these two separately.

Passive investors often hold low-cost index funds to gain broad exposure to the market, and reap returns long term. The average yield of an index fund has been around 10% for the last 100 years, with a lot of variations in individual years.

So to get an overview of the yearly returns of the S&P-500 index, which is the base of many popular index funds, you may look at the table below. 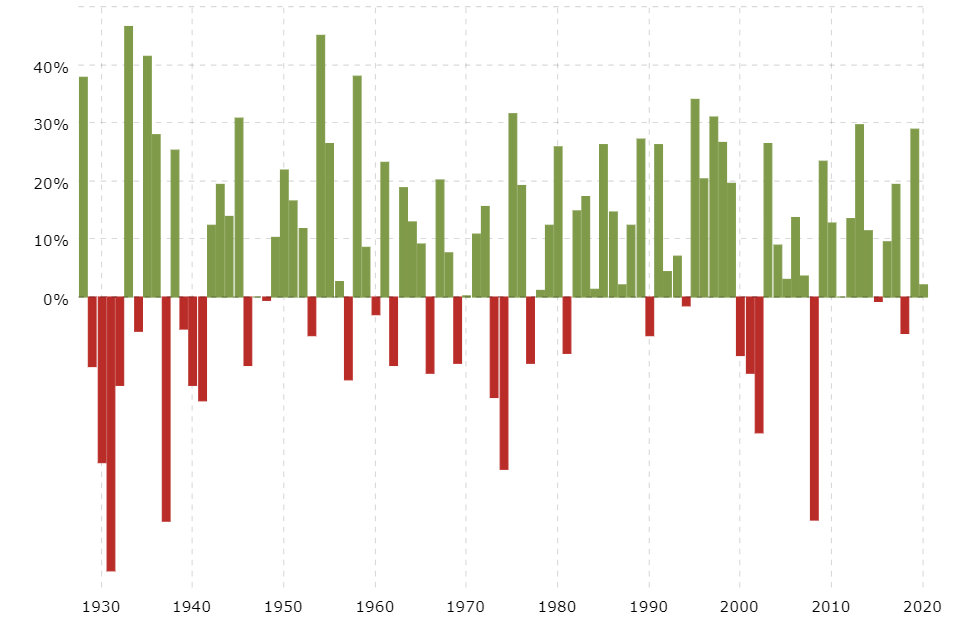 Since the late 1920s, the highest return we’ve had any single year has been 46%, while the most negative year made us lose some 47%.

Assuming that past performance has some relevance to future performance, we may conclude that a passive investor who holds an index fund is very likely to make somewhere between +46% and -47% in one single year.

If you’re instead being highly selective about your stocks, in an attempt to find those companies that hold the greatest potential going forward, there is no way to predict the outcome. If you’re lucky (or perhaps skillful) you may choose the very stock or stocks that will multiply tenfold the coming year.

Just as with active investing, there really is no definitive answer to how much money trading could make you in one year. Trading return varies a lot, and just as with any other investment, you’ll have some great years while others may be breakeven or even losing years.

However, with the greater profit potential that trading offers, you could say that the potential for big profits is quite high while the risk of having a great loss after a full year is quite limited. That is, while a drawdown could persist for longer than a year, it’s very unlikely that you’ll be at the very bottom of the drawdown as the year comes to an end. It’s much more likely that you do a partial recovery, and don’t end up losing so much.

It’s close to impossible to give a definitive number of how much money you can make in the market in one year, since there are so many factors at play. However, we hope that this article has provided some guidelines as to what you may expect from different trading and investing styles.

If you’re interested in learning more about trading and how to beat the market, we recommend that you have a look at some of our articles on trading, like: