Survivorship Bias Trading (What Is It? Examples, How to Avoid, Meaning)

Both in financial trading and other aspects of life, we often like to focus on people or strategies that post the biggest results and think that they represent the best approach to achieving great results. But most likely, those people and their strategies use a very dangerous approach that simply survived by being lucky. Just because a particular strategy worked one time for one person doesn’t mean it’s a good strategy for others, which is why, if you’re always chasing the gains of the most successful stock pickers, you will be exposing your portfolio to unnecessary risk due to survivorship bias. And, you may ask: what is survivorship bias?

Survivorship bias is a type of sample selection bias that happens when a study only considers “surviving” or existing observations and fails to consider observations that meet the selection criteria but no longer exist at the time of the study. In the financial trading/investment world, survivorship bias arises when investment performance is analyzed using only “surviving” constituents of a selected investment universe, rather than incorporating all current and historical constituents over the performance period. To put it simply, it is the tendency for us traders to cherry-pick strategies/signals that successfully made it through a selection process and ignore all those that failed. We tend to focus on the biggest performers, even if the result is mostly due to luck rather than viability.

Survivorship bias can be seen in all aspects of life, but we will try as much as possible to focus mostly on how it applies to trading the financial markets. So, in this post, we will discuss the following:

What is survivorship bias trading?

Also known as survivor bias, survivorship bias is a form of sample selection bias that arises when you consider only the “surviving” or existing observations and neglect observations that meet your selection criteria but no longer exist. This bias can manifest in different aspects of our individual and collective lives — from health to military and more importantly, even in the financial trading world.

In the financial trading/investment world, survivorship bias is the tendency to analyze investment performance using only “surviving” constituents of a selected investment universe instead of incorporating all current and historical constituents over the performance period. For example, we often view the performance of existing stocks or funds in the market as a reliable representative sample of the market without regarding those that have gone bust. To be more specific, we see the performance of the present stocks in the tech sector and feel like this is where the money is multiplied, without considering the tens of them that got burst during the dot-com crisis.

Survivor bias often leads us to overestimate the historical performance and general attributes of a fund or market/sectoral index. In quantitative backtesting of market or sector performance, survivorship bias makes us use the current components of an index, rather than all the actual constituent changes over time, for our analysis. The problem arises from the fact that the characteristics of survivors systematically differ from the characteristics of the overall original population. Survivor bias is usually a result of a non-random selection process or inadvertently neglecting qualified members of the study population because they are not readily available, so the data is biased in some way for or against certain traits, characteristics, or behaviors.

For us retail traders, survivorship bias is the tendency to pick and analyze only the strategies or signal providers that performed exceptionally well and ignore all those that didn’t reach our cut-off mark. We tend to focus on the survivors, even if they survived out of luck rather than viability.

We see people with a success story — be that a billionaire stock investor, a successful entrepreneur, or a world-champion athlete — and think that if we do exactly what this billionaire investor or entrepreneur did, we will be a success just like he or she was, without knowing that the fellow might just be a few that survived out of the very many that followed that path. In effect, those with exceptional results, whom we consider gurus, might have only survived out of luck.

The implication is that the most extremely successful outliers on Wall Street at any given time almost always took some extreme form of risk that just happened to pay off big. Just because a particular strategy worked one time for one so-called guru doesn’t mean it’s a good strategy for others. While the success story is told, it neglects all those who have followed that route but failed, which is why some motivational speeches should always have the disclaimer — survivorship bias applies!

Coming back to the stock market, many tech and internet companies came up in the late 1990s, but only a few survived. So, using just Amazon, Google, and a few others that are doing well to say that the tech industry is the most rewarding, without considering the many that fell along the line, would be falling into survivorship bias because those few tech giants might have only survived out of sheer luck.

Similarly, the average annual return of the SPDR S&P 500 ETF Trust SPY is in the range of 8% to 15%. However, in any given year, many traders generate returns that are 10 times higher than the market. So, the question is: how many of those are mere survivors? The truth is, it’s extremely unlikely that someone who has an investment strategy that generates a significantly higher return than the S&P 500 has found a strategy that is safe and consistent — more likely than not, the trader might have simply “survived” a very dangerous approach to investing out of sheer luck. The higher the returns, the more likely the result is out of sheer luck and not repeatable.

Examples of survivorship bias in the market

Let’s take a look at these few examples:

Survivorship bias when backtesting the performance of market benchmarks

When conducting quantitative backtesting of the performance of a market benchmark, survivorship bias arises if you use only the current components of the index rather than the actual constituent changes over time.

Let’s say we are considering a backtest to 1990 to find the total return of S&P 500 members who have paid dividends within the preceding year. If we use only the current 500 members and create a historical equity line of the total return of the companies that met the criteria, we would be adding survivorship bias to the results because S&P maintains an index of only healthy companies. Companies that no longer meet their criteria as a representative of the large-cap U.S. stock market are removed from the index from time to time.

When assessing the performance of funds, survivorship bias can arise when the published investment return data excludes funds that have ceased to exist — which most likely were underperforming funds — thereby leading to a deceivingly high return. There are a variety of reasons for funds to disappear, but underperformance is the most common reason. Now, let’s analyze the performance of the funds in the table below:

If we consider only the three active funds, the average return will be 13%. However, if we include all possible observations that meet our criteria (the five funds in this case), the calculated average returns will be only 2.4%, which is much lower than the return calculated with survivorship bias. In fact, a study performed by Commerce Financial Planning shows that after 15 years, only 48% of funds survived and 17% beat their benchmark, but if the closed funds are not included (survivorship bias) in the performance data, one would mistakenly believe that over 35% ([17/48]x100) outperformed their benchmark. 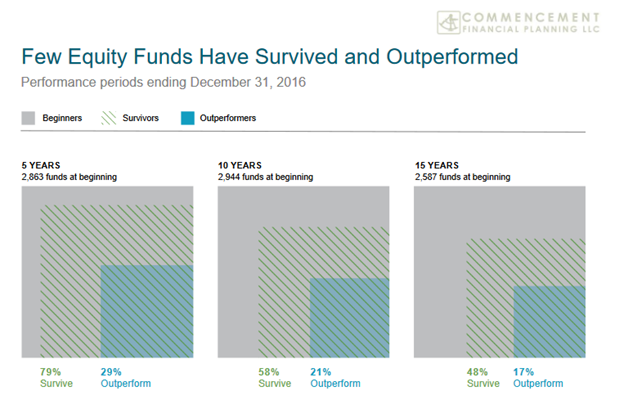 Survivor bias also arises when a study on industry performance fails to include financial information about companies that have been acquired, liquidated, or gone bankrupt. Unfortunately, many financial analysts inadvertently allow survivorship bias in their analysis.

Another scenario is when an investor or analyst compares the price-to-earnings ratio of a stock or an industry to the average P/E ratio of the S&P 500 to assess how relatively expensive or inexpensive the market is. The survivor bias here is that poorly performing companies are omitted from the benchmark.

How survivorship bias can impact your trading

These are some of the ways survivor bias can affect you as a trader/investor:

When you make a misguided decision to invest in equity funds based on published studies about equity fund return that does not include data of failed equity funds, you run the risk of getting returns that do not correspond with the study results. The reason is that your investment decision was based on incomplete and misleading information.

In 2020, the S&P 500 returned over 16%, which is an impressive return for an inherently diversified equity asset, such as a fund that tracks the S&P 500 Index. On the other hand, many people who put all their eggs in just one trendy stock like Tesla Inc (TSLA) or Zoom Video Communications Inc (ZM) made multiples of that 16% return in 2020, but that does not make the strategy of concentrating your capital on one stock a good approach. Those traders who killed it with TSLA or ZM were simply the few survivors among a great many people who used the approach of picking a few stocks but unluckily picked the losers.

Experience has taught us that rather than focusing on the latest trendy stock-picking outliers, a safer strategy is to look at investing and trading techniques that have worked consistently for a wide variety of traders for very many years — diversification.

In this era of the internet and easy private messaging via emails, scammers have even taken advantage of survivorship bias and are using simple probability to convince people that they’re skilled stock pickers, and you can fall a victim to them.

Let’s see how it works:

A scammer can email 10,000 different people, sending each person a different microcap stock pick for that day and assuring them that the stock will gain at least 10% during the following week. So, the scammer sent 10,000 different stocks, and if only 1 stock out of every 25 of them gain 10% that week, it means 400 people received accurate predictions.

The scammer then repeats the process the next week and sends another 400 stock picks to those remaining 400 people, so, assuming the same 1 in 25 probability, 16 people would receive two different stock picks that each gained at least 10% in back-to-back weeks.

At this juncture, the scammer will tell the 16 people to pay just $1,000 each for a stock-picking newsletter subscription that can make them rich. What the victims don’t know is that they would be paying $1,000 each for microcap stocks that are randomly picked.

You can be a victim of this scam if you’re always chasing the gains of the most successful stock pickers, without knowing that you can be a victim of survivorship bias. Instead of identifying real experienced traders, you either end up with scammers or follow the small percentage of traders that took a dangerous approach to the market and luckily survived while ignoring the vast majority of people who took a similar approach but failed.

How to avoid survivorship bias

The first step to avoiding survivorship bias is to know that it exists and how it can arise. The next thing you do depends on if you want to trade the market by yourself or make use of a fund manager. If you decide to choose the services of an investment manager, ensure you review the manager’s historical marketing material for undisclosed funds’ performance.

On the other hand, if you want to trade by yourself, it’s important you use survivorship bias-free data when you are developing and testing your trading strategy. A few database sources, such as Tick data and Kibot, which do not remove the observations that are no longer in existence, can be a good source of data.