Linear vs. Logarithmic Chart Scaling Explained …What is the difference, and which is better?

The price movements of an asset can be viewed in different scales — linear or logarithmic scale — and most modern trading platforms can display in any scale. Determining the best chart scaling method to display the price action can help you improve your analysis and trading results. But what is the difference between the linear and logarithmic scales, and which is better?

In the logarithmic chart scale, the prices (Y-axis) are spaced proportionally and not equidistantly, while in the linear scale, the prices are spaced equidistantly — an equal value between price positions. The logarithmic scale is better for showing wide price differences over a long period, but you will prefer the linear scale when you’re dealing with small price fluctuations over a short duration.

To help understand the topic, we will discuss it under the following headings:

What is linear chart scaling?

Linear chart scaling uses an equal value between price positions on the y-axis. It plots price changes in a constant unit value such that any two price positions are equidistant from each other. The price spacing is equal, and the reference points along the y-axis ascend in equal increments. In other words, a unit precisely stands for a unit.

Let’s take the linear chart of Zoom (ZM) above as an example. The price action in the portion of the chart with brown color seems static. But it represented the price doubling from $60 to $120. Each time, it takes a bigger price change for the price to double again, as can be seen in the blue and purple arrows. This is the main drawback of using a linear chart on either a long timeframe or once the security has doubled on the chart. In this case, for instance, because ZM was cheaper between $40 and $120 in the marked-portion, the price changes look insignificant.

When to use linear chart scaling?

Linear chart scaling is used when a security price is moving within a narrow range or over a short time. In this situation, the trader wants to clearly see the small changes in price and know their actual value. Thus, the linear chart scale is best for short-term traders, such as scalpers, day traders, and swing traders, because these categories of traders are only concerned with price movements that happen over a short time — minutes, hours, days, or a few weeks — which are relatively small most of the time.

You may want to know what logarithmic chart scaling is, when to use it, and why long-term traders may prefer it. We will discuss all of that.

What is logarithm chart scaling?

Instead of a unit of measure, logarithmic chart scaling shows the values proportions of the log. In other words, the price changes on the y-axis are not represented in their units but rather in a proportion — most commonly percentage — of the initial value. A logarithmic price scale is plotted such that the prices in the scale are not positioned equally from one another but rather represent an equal proportional increase (percentage increase) in the price of the security.

Since equal percentage price change is represented by the same distance on the price axis, it means that in a logarithmic chart of a stock, there will be the same distance on the y-axis when the stock goes from $2 to $4 and when it goes from $80 to $160. The percentage changes are denoted equally, the price notwithstanding. Thus, logarithmic chart scaling helps to capture the importance of the movement of larger prices. It is especially useful in analyzing exponential growth.

For instance, let’s take another look at Zoom (ZM). A linear chart scaling will not give the true picture of recent price changes since the stock crossed above the $240, as you can see in the linear chat below; the price movement from $240 to $480 looks much more significant than the price movement from $60 to $240, although the $240 to $480 is only a 100% increase, relative to the $60 to $240 movement, which represents a 300% increase.

When to use logarithm chart scaling

It is better to use the logarithmic scale when the differences from the beginning and the end of the period are large. In this situation, the trader wants to put the recent price changes in perspective, irrespective of how apparently large it is. So, long-term traders who analyze the course of a price movement over months and years may want to use the logarithmic scale to put things in the right perspective.

By using both linear and logarithmic scales, long-term traders are able to see how the price fluctuates, both in dollar value and percentage yield. For example, the percentage change from $50 to $55 is the same as the percentage change from $75 to $82.50. In most cases, the scaling method used does not make a difference in less volatile stocks with short-to-intermediate-term time frames on their charts. It will not make much of a difference if you switch from linear to logarithmic chart scaling.

Long-term traders prefer logarithmic chart scaling because it allows them to see how the price has changed in percentage terms. It helps them to put things in the right perspective by studying the increment relative to the entire price movement. Since logarithmic scaling shortens the data points, it enables long-term traders who want to see the price movement over several months and years to get a broad view of the market.

Here are some of the benefits:

Easily shows fast and significant price moves in the past: The first chart below uses a linear chart to represent Bitcoin (in USD). The movements before 2017 are not obvious in the chart. While the change appears dramatic from the logarithmic scale, the two charts display the same data. The rise in 2017 is extremely significant in the logarithm scale. Although this is not visible on the linear chart, it is noteworthy nonetheless. Using logarithmic chart scaling is thus always beneficial because of this. Using a logarithmic chart scaling method, you will be able to better cope with extreme skewness.

Which chart scaling should you choose?

When the price of the stock you want to track has moved significantly over the time your chart covers, a logarithmic scale is invaluable. For example, if the stock’s price has dropped from $150 to $8, and you use an arithmetic scale, you’ll have to create extremely close dollar increments, as you’ll have to view your graph on a large screen. With this in mind, you won’t notice the 12.5% change from $8 to $9. This problem will be avoided using a logarithmic scale. A significant percentage of movement is linked to a significant visual change regardless of where you are on the chart. 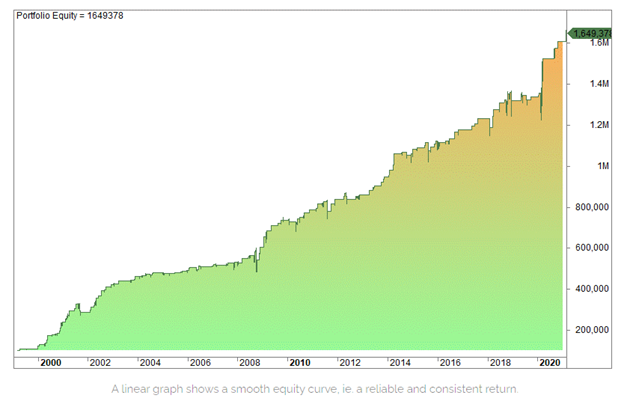 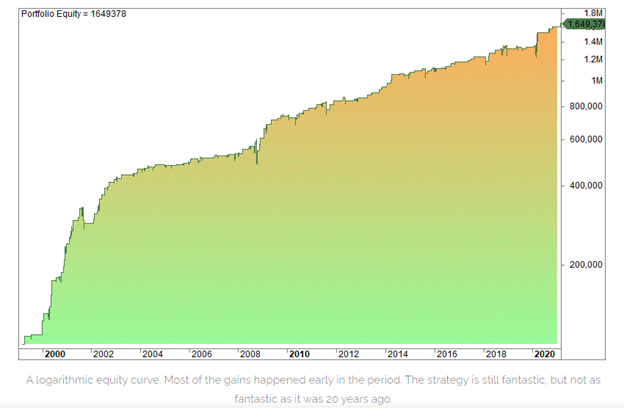 Let’s say that you are conducting a test over a decade, such as between 1990 and 2021, and you can expect to earn 12% CAGR during this period. However, the performance could be entirely different from the beginning and end date. It might have been an excellent strategy in the 1990s, but it has subsequently gone awry in the preceding five to six years, for instance, from 2015. If a linear equity curve is used, the disparity between the points won and lost will be invisible and may even mislead one into thinking the strategy is still working like before.

To demonstrate this, let’s see the example below of how equity curves can differ depending on whether a strategy employs a linear or logarithmic scale. The strategy is tested on Nasdaq/QQQ and has an average gain of 3.21% per trade from 1999 till the later end of 2005. The average gain is just 1.16% between 2006 and 2021. Although this strategy is still doing fantastic, it was more successful at the beginning during the dot-com era of high volatility, despite being a long-only strategy.

See how the strategy’s performance looks on a linear chart:

Now, see how the performance looks on a logarithmic scale:

As you can see, the logarithmic scale shows that the strategy’s performance has dropped by a lot.