What Is Mean-Reversion Trading?

Traders make use of different strategies to increase their chances of making money in the market, and one of the most commonly used strategies among short-term traders is mean reversion. You may be wondering what mean-reversion trading is

Mean-reversion trading is a method of trading that is based on the concept that the price reverts to its mean after making an exaggerated move to one side. Thus, traders try to identify exaggerated price moves and trade the reversal to the mean, which they often identify with a moving average indicator.

What is mean reversion?

The mean-reversion theory is based on the statistical concept of central tendency, which shows that for any variable, the majority of the data set revolves around the center and only a few outliers. So, the data points generally tend toward the mean, and when they significantly deviate from the mean, the chances of going back to the mean are high. This tendency was first observed by Francis Galton, who described it as regression to the mean — that is, for any given variable, the farther the value is from the mean (outliers), the more likely it is that it will revert to the mean.

In life, extreme events are often followed by normal events, as things tend to even out over time. This is also true in the world of finance, where the theory is used to suggest that certain financial and economic variables, such as an asset’s price, economic growth, the volatility of a stock, a stock’s price-to-earnings ratio (P/E ratio), or the average return of an industry, eventually revert to their long-run mean or average level after deviating significantly from the mean.

However, for us traders, our focus is on price movements of any security we are trading. When the price moves significantly away from its moving average, it tends to retrace itself and move towards the average. However, with the movement not being perfectly coordinated, the price often overshoots on the opposite side and, again, tries to retrace to the mean. These to and fro (up and down) swinging movements create patterns that traders try to exploit with different strategies and indicators, as we will discuss later in this post.

Mean-reversion trading is a technique used by traders, which is based on exploiting the concept that the price reverts to its mean after making an exaggerated move to one side. The aim is to recognize the price mean and identify a significant price deviation so you can trade the reversal to the mean. This is used in short-term trading methods, such as swing trading and day trading where the aim is to capture short price movements.

To trading the mean-reversion strategy, you must have a way of establishing the price mean and defining what constitutes a significant price move away from the move. Traders normally use the moving average indicator to estimate the dynamic mean of the price and use indicators that show overbought and oversold levels to indicate significant price moves away from the mean. Traders expect the price to reverse and so trade in the direction of the mean. See the picture below: 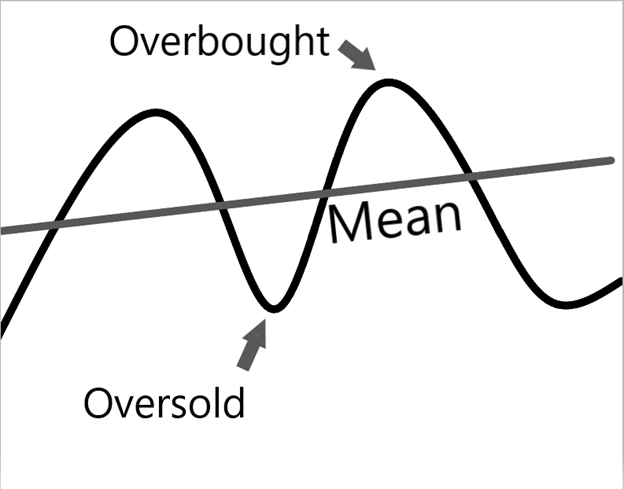 An overbought market occurs when the current price is significantly higher than the average price, while an oversold market is when the current price is significantly lower than its average price. There are many methods traders use to identify oversold and overbought market situations; a good example is an oscillator like the RSI. We’ll discuss all those later under the mean reversion trading strategies. Now, let’s see the reason behind the mean reversion.

Why there is mean reversion in price movements

The price always swings up and down about its mean for a reason, which is that market participants mostly act based on sentiments. It’s these sentiments, especially fear and greed, which govern the financial markets, particularly the stock market. This is how they affect the price movements:

When a stock’s price is rising, it attracts many investors and traders who rush to buy the stock in order not to miss out on the opportunity — fear of missing out (greed). As a result, there will be a higher demand for the stock than supply, making the price rise more and more.

Meanwhile, more traders are lured in, greedily buying the stock as the price continues to rise; this continues until the price reaches a point where the early buyers start selling to secure their profits. Up to that point, the demand-supply balance has been in the favor of demand, but that is now changing, as more people are willing to sell to take profits. As a result, there is now more supply than demand. As one should expect, when there is more supply than demand, the price begins to decline.

As the price continues to fall, the late buyers, who are already at a loss by now, become afraid and dispose of their holding, creating more supply and causing the price to decline faster — often dubbed a selling climax or capitulation, it marks the end of the downswing.

Meanwhile, the mean price of the stock lies somewhere between the two extremes. So, at that significantly lower price, traders and value investors would consider the stock underpriced (undervalued). Expectedly, they start buying the stock again, increasing the demand for the stock. When the demand exceeds supply, the stock rises again, and the cycle continues.

There are many strategies traders use to exploit the mean-reversion concept in the market. However, we will focus on the common ones we know that work, and we will only consider buy setups. These are just explanations for you to get some mean-reversion trading ideas; it’s left for you to develop a strategy that suits your particular approach and preferred indicators or price action patterns. Here are five strategies you can use for mean-reversion trading: three uses indicators, while two uses price action.

So, the middle moving average line shows the mean price, while the lower band is considered the oversold level. The upper band is considered overbought. Traders look for buying opportunities when the price is in the oversold region (below the lower band) and aims to take profit once the price crosses above the middle band. See the US 30 Index chart below:

The 2-day RSI crossing below 10 indicates that the market is oversold, so you can look to go long. The trade can be closed once the 2-day RSI crosses above 60. See the Nasdaq 100 Index chart below:

With this strategy, you simply count the number of days the market consecutively closed lower; three consecutive downward closes are commonly used.

The rule is as follows: go long when the price makes three consecutive down closes and exit at the close of the first up day. See the S&P 500 Index chart below:

The pros of mean-reversion trading

Mean-reversion trading offers a lot of benefits. These are some of them:

The cons of mean-reversion trading

Mean-reversion trading comes with some drawbacks. One of them is that the market can continue moving in one direction without letting up. In the case of a stock, this can happen when a new and innovative product is released (for example, Pfizer’s release of Viagra in the 1990s), on the positive side, or when there is a recall of products or lawsuits or sanctions from regulatory agencies.

Another one is that even though we can use certain indicators and price patterns to estimate an exaggerated price move, there is no way to know for sure where the price would reach and revert to its mean.

Precautions to take when trading with mean-reversion strategies

To improve your odds when using a mean-reversion strategy, there are a few things you need to consider. These are the key ones:

Mean-reversion trading is a strategy to take advantage of the natural swing pattern of the market. It is based on the idea that the price often reverts to its mean after making an exaggerated move to one side.