Cocoa Trading – 33 Things I Wish I Knew Before I Started

Soybean Trading – 30 Things I Wish I Knew Before I Started

Also known as maize, corn is one of the most popular cereal grains in the world. Corn is the seed of a plant (Zea mays) in the Poaceae family. Although the grain is native to Central America, it is widely cultivated in countless varieties throughout the world.

Corn Futures market trade on the CME exchange with a tick value of $12,5 and a contract size of 5000 bushels. Corn futures contracts are the best option for traders and hedgers who wish to gain quick and cheap exposure to the corn market.

Corn was first domesticated by indigenous people of Southern Mexico around 8000 BC, and it wasn’t until about 1492 that Columbus introduced it to Europe. Used in a wide range of industrial products, corn is currently the most-produced grain in the world.

It is one of the most-grown crops in the United States, and its futures contracts are traded on several commodity exchanges around the world.

Being a staple commodity for everyday life, corn futures contracts are actively traded on the commodity exchanges. There is a huge demand for corn because of the increasing number of ways it can be used, which includes the following:

Human food: In the grain form, corn is a staple food in many parts of the world, especially in Mexico, Africa, and Asia. It is also used to make breakfast cereals.

Livestock feed: Corn is the main source of grain feed for livestock, accounting for over 90% of feed grain production, while the rest of the maize plant is also used as fodder.

Biofuel: Corn is heavily used in the production of ethanol, which is increasingly becoming an important additive in gasoline. In addition, maize cobs are used as biomass fuel.

Industrial chemical: The starch from corn can be used to make fabrics, adhesives, plastics, batteries, crayons, glue, and others.

Alcoholic drinks: Corn is also used in the production of many alcoholic beverages, such as gins, rums, and whiskeys.

The Largest Producers and Consumers of Corn

Corn is grown in almost all parts of the world, and with an annual production of 1.04 billion tonnes as of 2014, it is easily the most produced grain in the world.

The US is by far the largest producer of corn, followed by China, Brazil, India, Argentina, Ukraine, Mexico, Indonesia, France, and South Africa.

In terms of consumption, The US and China top the list again. In fact, the two countries account for about 54 percent of the world’s corn demand. Other top consumers are the European Union, Brazil, Mexico, India, Egypt, Japan, Canada, Vietnam, Argentina, and Ukraine. Corn transactions are mostly done via futures contracts.

Corn is one of the most-traded soft commodities, and there are reasons why traders find corn futures contracts very attractive. Apart from the direct stakeholders in the corn ecosystem, who come to the market to protect their various businesses, other corn traders are in the market for the following reasons:

Growing demand: There is an increasing demand for corn in many countries, including China, the US, and the EU. This is not unconnected to its numerous uses, especially in the production of biofuels. In fact, many countries have ethanol targets. As a result, there is high liquidity in corn futures contracts, making it one of the most preferred agricultural commodities for active trading.

Portfolio diversification: Fund managers and some retail investors come to the corn market to diversify their investment portfolio and ensure that their risk is spread over multiple asset classes. Diversification across different markets protects investors from both systematic and unsystematic risk.

Hedging against inflation: Fiat money normally lose their value over time, as the central banks print more notes and play with the interest rates. Agricultural commodities, like corn, are often used to hedge against inflation since they tend to increase in value when inflation bites.

How to Play the Corn Market

The easiest way to play the corn market is by trading corn futures contracts. Corn trades on the Euronext, Tokyo Grain Exchange (TGE), and the Chicago Board of Trade (CBOT), which is a part of the CME Group. Through the CME Globex electronic trading platform, traders from any part of the world can trade the contract.

On the CME exchange, corn contracts usually expire in the months of March, May, July, September, and December, and they are settled by physical delivery of the total quantity of corn traded. A contract is equivalent to 5,000 bushels of #2 yellow corn.

Futures contracts offer the opportunity to use a little amount to carry a huge contract — a trader is only required to deposit the margin. There other ways to play the corn market, such as corn options, corn ETFs, and corn CFDs, but they are not always easy to access.

Comparing corn futures contracts with other methods of trading corn

Finding a trading strategy for the corn futures market indeed isn’t a market that aspiring traders should begin creating strategies for. There are easier markets to start with, for sure!

However, upon finding an edge that works in a trading strategy, you will be rewarded with something that has a great likelihood of fitting well in your portfolio, providing valuable diversification.

If you build your own trading strategies and are interested in getting new edges delivered right to your inbox, we recommend that you have a look at our edge membership!

A lot of factors and data reports can affect the price of corn futures contracts, so as a corn trader, you must watch out for them. They include the following:

USDA World Agricultural Supply and Demand Estimate (WASDE) Report: This is a monthly forecast of the demand and supply expectations from various regions.

USDA Prospective Planting Report: Normally released in March, the report states the quantity and type of crop that U.S. farmers intend to plant.

Grain Stocks Reports: This report is issued quarterly by the National Agricultural Statistics Services (NASS), and it gives an update on stocks of corns and other major grains and oilseed crops.

Another factor to keep an eye on is the Chinese corn demand because China needs a lot of corn for ethanol production and human consumption.

Here is a chart showing the seasonal effects on the corn futures market: 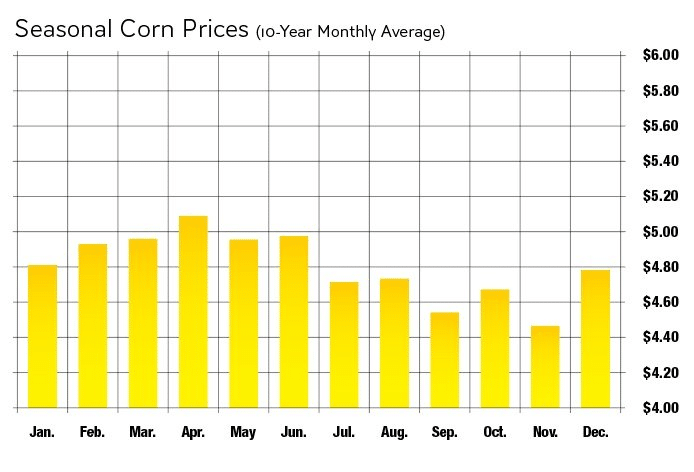 Used in the production of human food, livestock feed, biofuels, alcoholic drinks, industrial chemicals, and sweetening syrup, corn is one of the most versatile agricultural commodities in the world. Corn is grown in every part of the world, and the futures contracts are actively traded on several commodity exchanges across the globe.