Commodity Supercycle: What Is It, and Can You Make Money from It?

Commodity Supercycle: What Is It, and Can You Make Money from It?

While the global economy tends to be very cyclical — that is, it is prone to alternating periods of boom and bust — there are times when a cycle persists in the boom phase for a prolonged period. With the steady rise in commodity prices over the last 10 years to 2021, one may ask whether there is a commodity supercycle. But what does that mean?

A commodities supercycle is a period of sustained increase in commodity prices, driven by structural changes in the global economy. It is a relatively rare phenomenon and is characterized by commodities trading above their long-term price trend over a long period. In fact, there have been only four commodities supercycles since the 19th century, and each is tied to a transformational period of economic development.

We’ll discuss the topic under the following headings:

What is a commodity supercycle?

A commodities supercycle may be defined as a period of sustained increase in commodity prices above their long-term trend for between 10 to 35 years. It is a relatively rare phenomenon and is often driven by structural changes in the global economy.

The world’s economy tends to be cyclical, alternating periods of boom and bust. The upswing is followed by a downturn of similar duration as supply eventually catches with demand. There are four stages of an economic cycle: expansion, peak, contraction (recession), and trough, which is followed by another expansion to mark the beginning of a new cycle. While a typical economic cycle lasts about 5.5 years, supercycles are characterized by commodities trading above their long-term price trend over a long period.

Economics experts believe that commodity price supercycles are typically triggered by events that cause some sort of structural boost to commodity demand at a level that is large enough to alter the balance in the global demand and supply of the commodities involved. When there is a sudden huge demand for commodities, there would often be a lag between supply and demand because it can take up take 10 years or more to build a big mine or develop a large oilfield.

As you know, commodities are raw materials for running the world economy. They include industrial commodities, such as oil, copper, and zinc; agricultural commodities, like cotton and grain; and precious metals, such as gold and silver.

Commodity prices are highly cyclical: when prices rise, commodity producers boost supply to take advantage of the rising prices, but when supply rises to meet demand, prices fall again. So, by and large, commodity prices tend to stay mostly in a range over the long term. However, when there is a structural event that boosts the global demand for commodities, supply struggles to keep up as producers adjust to meet the demand, leading to a sustained period of rising commodity prices.

According to economic experts, there have been only four commodity supercycles since the 19th century. They are as follows (see the chart below): 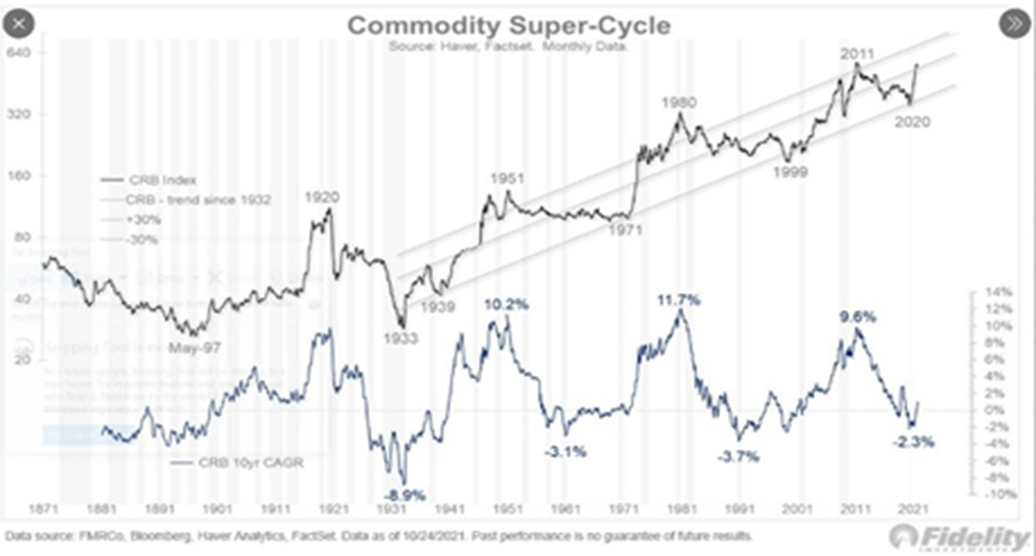 Which commodities are most in-demand during a supercycle?

The next supercycle may not be like the previous ones

Many economists believe that the next supercycle will not be like the previous ones, especially with regard to the commodities that experience growth in demand. Historically, the global energy supply has been from fossil fuels such as coal, crude oil, and natural gas, and those commodities experience huge demand growth during supercycles. But with climate change and the necessary transition to low-emission power sources and modes of transportation, the demand for coal, crude oil, and natural gas may decline. Furthermore, the move away from industrialization and toward digitalization could significantly determine the commodities that experience the most demand growth in the next supercycle.

By and large, the next supercycle may be determined by the following:

Sam Alton and OpenAI: Revolutionizing tech and the AI Landscape

Can You Become a Millionaire from Stocks? (Trading and Investing)