How To Short the VIX (With VIX Strategy Backtests!)

The VIX Index, sometimes called the “fear index”, is a market sentiment indicator that measures the market’s expectations of the volatility for the coming 30 days. And even if VIX just is a synthetic index, it can be traded through futures, or funds that invest in VIX futures contracts.

But before we do that, there is some crucial information about the VIX market that you need to know! Let us explain!

What You Need to Know About Shorting the VIX

Over time, shorting the VIX has become a very popular trade. And indeed, it has been profitable for a long time and probably will continue to be, if the markets continue to surge.

However, if you’re going to engage in short selling in the vix market, there are a couple of things you will benefit from being aware of! Those are:

Due to this, we could potentially make profits for a short time, just to give it all back once the market volatility picks up again. This was exactly what happened in February 2018, when the stock market fell, and the resultant surge in the VIX even wiped out a complete fund. Of course, many retail investors and traders were hit hard!

Since the VIX is a synthetic index, it has no underlying. This means that most funds that trade the VIX use the Vix futures contract as the underlying.

This, in turn, has another effect. Since futures contracts expire and are obligations to buy or sell an asset at a future price and date, the anticipation of the coming market move is also priced into the current price of the futures contract.

Each point above is the price for one VIX futures contract, with its corresponding expiry date.

You see that if you just short and hold a contract, the value of your contract relative to those contracts with a later expiry date, will go down. As long as the VIX index doesn’t surge, but stays at the same level or goes lower, you would make a profit from shorting the VIX.

However, there still are substantial risks involved as well. As we saw in 2018, the VIX spiked and wiped out many traders’ accumulated profits of many years shorting the VIX!

Still, this still is a strong market bias that we can take advantage of in our trading! In the following sections, we will explore what market setups that work best in shorting the VIX!

How the VIX Behaves

To build a trading strategy on the VIX index, you could start by studying the main traits of the VIX. Doing so, you probably notice some things, like that VIX:

Looking at how the VIX behaves, there are many ways you could go about finding a trading strategy. For example, you could try to come up with a strategy based on mean reversion, breakouts or momentum and trend following.

We will begin by looking at mean reversion strategies, and then go on to momentum!

Shorting the VIX with Mean Reversion

In the image below, you see the occasional spikes of the VIX index, and how it quickly returns to normal levels.

If we could find a way to define an overbought level from where we go short, we could really make some profits in this market, considering the large and abrupt swings.

However, trying to pick the peaks in a relatively accurate manner is not an easy task. The VIX could very well continue up and make us exit the short position with a heavy loss.

Actually, when it comes to mean reversion strategies, you may want to consider not using stops at all! The more a market has moved against you, the better the edge gets. That’s why it could be better to stay in a losing mean reversion trade, even if it’s in a big loss. Of course, provided that your account is of such a size that further losses won’t have a significant impact on your account balance!

So, let’s now test some ideas that make use of mean reversion, to see if we can find anything of value! We’ll start with the RSI!

The traditional interpretation of the RSI indicator is that high readings are signs of that a market soon is about to revert to it’s mean. That’s also how we are going to try to use the RSI to go short when the VIX has moved excessively to the upside.

These are the entry and exit conditions

Entry: 5-period RSI is higher than 80

Here is the equity curve for this idea.

The curve goes up, but it’s not close to something we would like to trade! And this was about the best I could find when experimenting with the parameters!

This time we’ll try to use price action instead. We’ll go short when the close is higher than the high of the previous bar and exit 5 bars later.

Entry: Close is higher than the high of the previous bar

Let’s elaborate on the previous test. Here we try to short the VIX if the close is the highest close 20 bars ago.

Entry: Go long if the close is the highest close 20 bars ago

This doesn’t look too good either. Let’s abandon the idea of using mean reversion, and try trend following instead! Perhaps we find something better there!

Shorting the VIX with Trend Following

Now we’re going to try to go with the trend instead!

This time we short the VIX with a special with a price action condition. Below are the rules

Entry: Go short if the close crosses under the previous bar’s low

This looks much better than going short if the close crosses over the previous high, as we tested before!

Let’s now try to use an oscillator to short the VIX. We’ll begin with the results!

This at least looks better than going short on readings over 80! It suffered some losses during the great financial crisis, but all in all, this is a market tendency worth exploring further!

Remember, we’ve only used one condition for the entry, so there is plenty of room to add a filter for improved results! 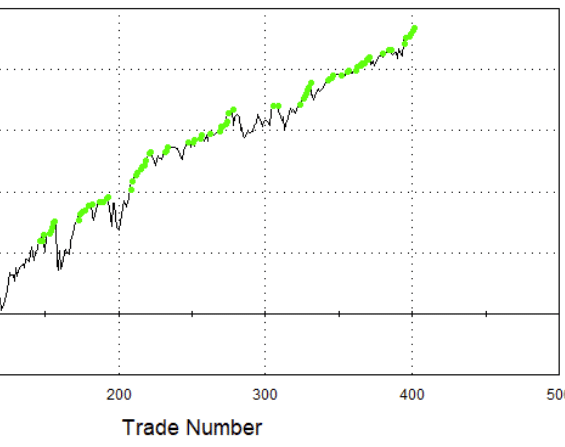 Here are the rules for this edge:

We are beginning to see some tendencies here! Going with the momentum seems to work better than mean reversion, at least from what these tests show us.

Interested in premium edges and strategies? Then have a look at our unique edge membership, where we provide edges for a range of different markets!

There are many ways you could short the VIX index. Just remember that the potential losses for short selling, in theory, are unlimited. This means that you’d better use a stop loss, to protect your capital!

If you’re interested in finding out more about how to trade strategies like these, we recommend that you have a look at our article on algorithmic trading!