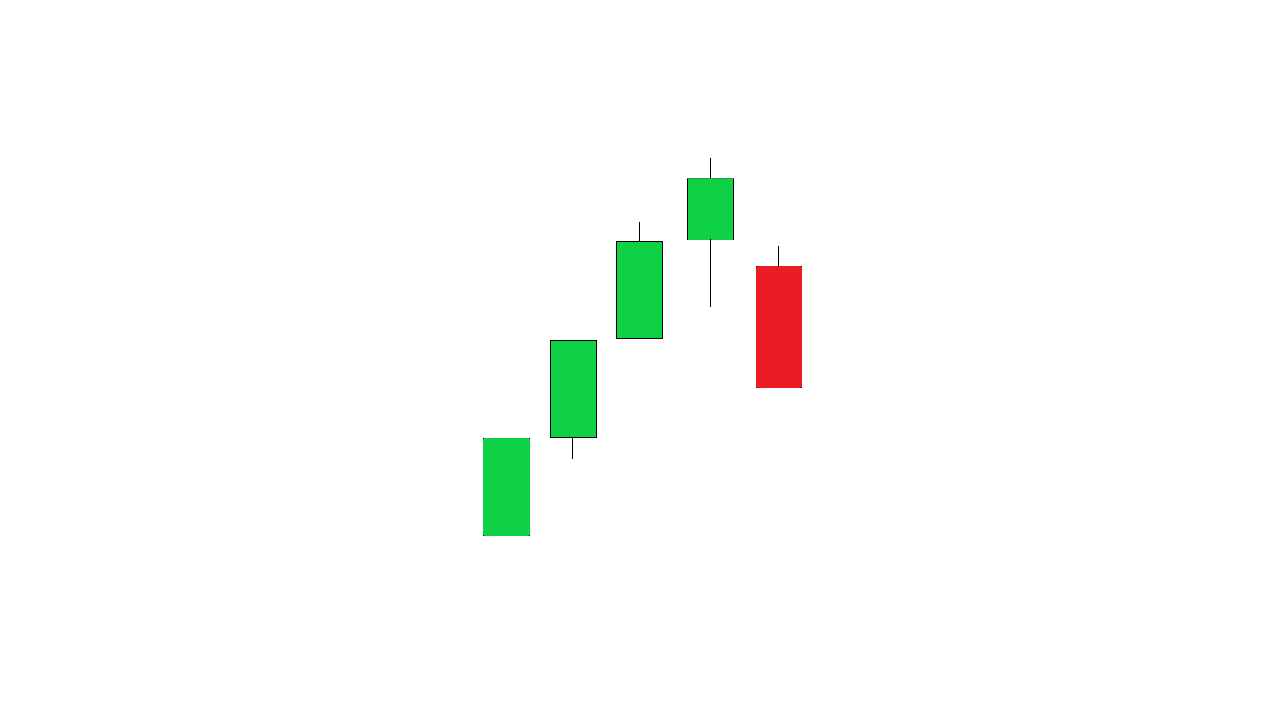 A bearish ladder top is a five-candle bearish reversal candlestick pattern that occurs at the end of an uptrend. The first four candles of the pattern are positive and followed by a negative candle that opens with a negative gap.

In this guide to the bearish ladder top you will learn everything you need to know about the pattern. We’re going to cover its meaning, definition, and trading strategies that make use of it. In addition to that, you’ll also learn some powerful techniques to help you rule out bad trades! 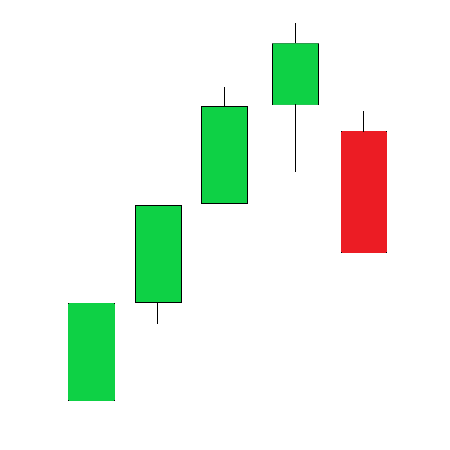 As said, a bearish ladder top consists of five candles where the first four are bullish, and followed by a negative candle that gaps down. More specifically, this is what you should look for:

The traditional interpretation of the bearish ladder top is that it signals a coming bearish reversal, meaning that the bullish trend has come to an end.

Bearish Ladder Top Meaning: What Does It Tell Us About the Market?

Since all candlestick patterns are unique, they hold their own stories about the market forces that lead to them forming.

And as traders, we’re quite interested in analyzing the markets and the reasons behind their moves, to gain a better understanding of the market we’re aiming to profit from.

Of course, it’s very hard to know why a market moved as it did. However, as traders, we’re always interested in watching and studying market data. Often it doesn’t take long before we start to notice recurrent patterns that form edges which we can use in our trading strategies. In fact, this is how we’ve come up with many of our trading strategies ourselves!

Having said all this, let’s see what a bearish ladder top might tell us about the market!

As the market comes from a bullish trend, most traders and investors hold a positive outlook. They’re sure that the market is headed towards new heights, and continue to issue buy orders, which fuels the market up even more.

This goes on as the first three candles of the pattern form.

However, once the fourth candle is about to form, the bullish sentiment suddenly starts to fade. Investors and traders start to worry that the bullish trend has overextended to the upside, meaning that a pullback is imminent. This leads to a wave of selling orders hitting the market which makes it fall a bit.

Now, as buying pressure still remains quite strong, buyers return and manage to make the market close higher for the fourth candle in a row. While this is good news for bulls, the fact that sellers were given a chance to derail the bullish developments is an ominous sign.

As the market opens with a negative gap the following candle, the fear of an imminent bearish reversal starts to materialize, which in turn causes even more selling pressure. As the candle closes in negative territory, more traders and investors realize that the bullish trend is threatened. As their sell orders hit the market, the bearish trend has officially begun!

Here follows an example of the bearish ladder top pattern. 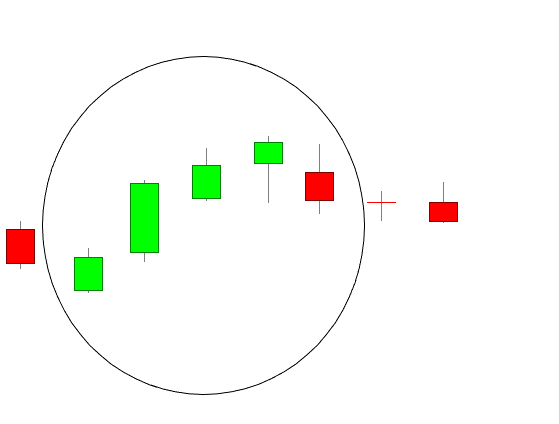 How to Trade the Bearish Ladder Top

When some traders get to know about candlestick patterns like the bearish ladder top, they tend to head straight to the markets to reap the profits of their newfound knowledge.

However, as more experienced traders will point out, candlestick patterns often need to be used together with filters in order to be worth our time! We simply need to filter out enough unprofitable trades so that the pattern becomes profitable.

Now, there are many filters and conditions that you could use. However, in this part of the guide, we wanted to share with you two types of filters that have worked very well in our own trading strategies over the years. Of course, these are filters that we believe will work well with the bearish ladder top.

In order to determine what works best with your market and timeframe, we highly recommend that you resort to backtesting.

Now, let’s have a look at the filters!

Some of the most common types of filters are volatility filters, and in our testing, they’ve shown promise across nearly all markets. All in all, that’s not too strange, considering that volatility is inherent in anything that moves.

Now, some patterns and strategies will benefit greatly from high volatility market environments, while others will show the complete opposite tendency. It varies a lot depending on the market, as well as the timeframe, which means that you’ll need to test for yourself what works best with your settings.

Keeping this in mind, let’s have a look at two common volatility filters that we’ve had great experiences with!

Many traders have never even considered the fact that markets aren’t equally bullish and bearish at all times. For example, there are certain days of the week, parts of the month, and so on, that are more or less bullish.

Now, if we know when a market is more or less likely to be bullish or bearish, we could use that to our advantage. For instance, taking a trade based on the bearish ladder top might be a bad idea if we’re entering an extra bullish period. Conversely, it might be a good time to enter if the market is entering a phase that usually is more bearish.

Here are the different angles from which we use to look at seasonality:

Now that we know the definition and meaning of the bearish ladder top and also have had a look at two powerful approaches to improve its performance, let’s have a look at some trading strategies.

Now, the strategies presented below must be applied to the right timeframe and market in order to work, and are provided as demonstrations only.  However, if we were given the task to construct a trading strategy of the bearish ladder top, the examples below would be a great start.

Since the bearish ladder top should occur once the market has moved up for a prolonged period of time, we might want to only take a signal that forms once the market is overbought.

Now, there are many ways you can define an overbought market, but one common approach is to use the RSI indicator.

So, in this strategy example, we’ll require that the RSI is above 70 to take a trade.

However, since the last candle of the pattern is bearish and will make RSI go lower, we’ll use the RSI reading of the second last bullish candle.

Then we’ll exit the trade as soon as the RSI crosses below 50. 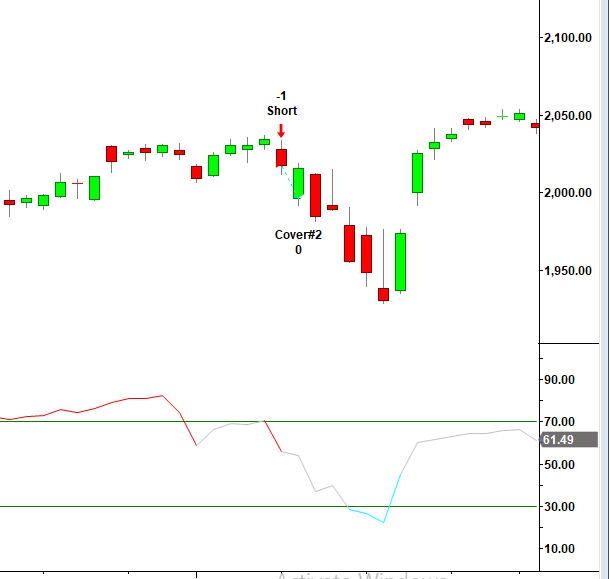 Now, one aspect of trading that we haven’t touched on so far in this guide, is volume. Being a sometimes overlooked concept, volume can help us quite a lot with validating our setups.

For example, we may want to take a pattern like the bearish ladder top more seriously if it’s formed with high volume. High volume simply means that there were more transactions that stood behind the move, making it more significant.

Now, you may also use volume to see if the strength of the market is fading or increasing. To give a clear example, a sign of weakness would be if the market performed the first four bullish candles of the pattern with declining volume. Thus, this is what we’ll use in this strategy example.

We go short if: 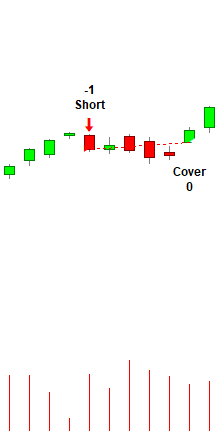 In this guide to the bearish ladder top we’ve provided you with tools to start trading the pattern yourself. However, it’s crucial that you learn to do your own testing on the markets. Unfortunately, most technical analysis doesn’t work as the textbooks show, and the only way of knowing what is worth your time is by learning to carry out the tests yourself.