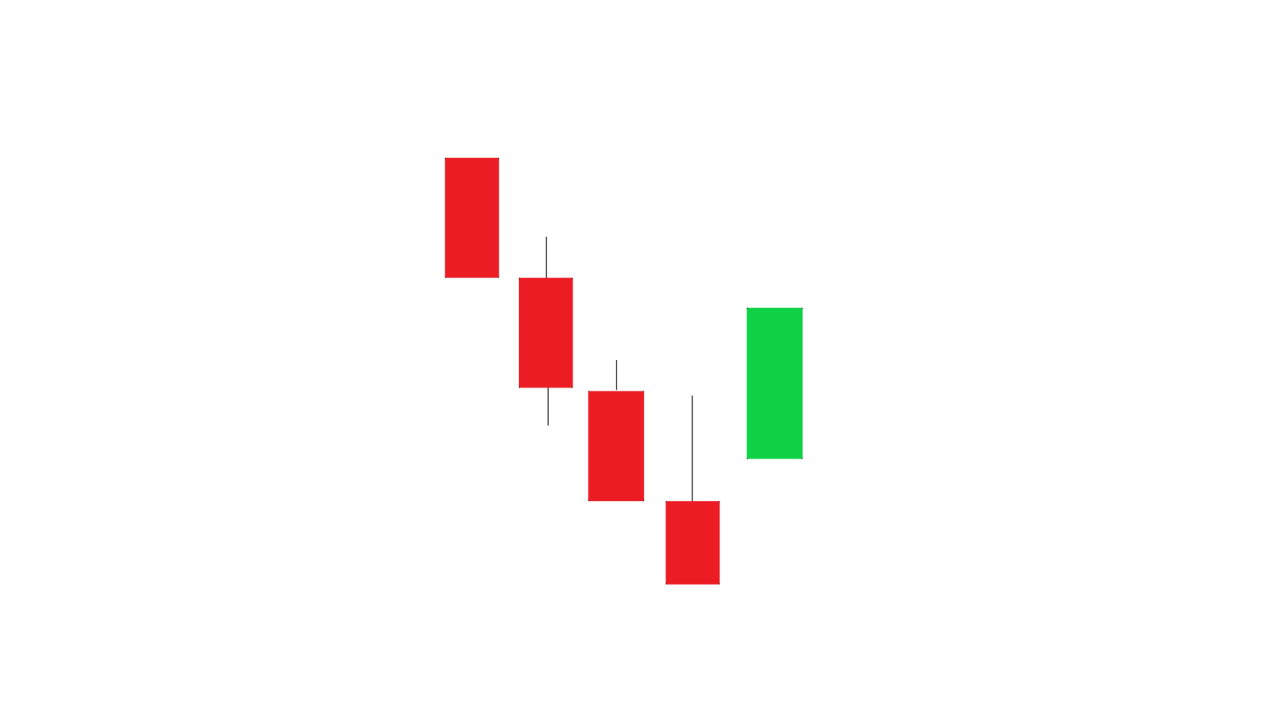 Candlestick patterns are some of the most most popular ways to find entries and exits in the markets. With their colorful bodies and unique shapes, they make charting price easier, which has contributed to their popularity among traders. One common candlestick pattern is the bullish ladder bottom.

Bullish Ladder bottom is a five candle bullish reversal pattern that occurs at the end of a bullish trend. The four first candles are bearish, and followed by a positive candle that starts with a positive gap.

In this guide to the bullish ladder bottom, you’ll learn everything you need to know about the pattern. We’ll cover its definition, meaning, powerful techniques to remove bad trades, as well as some trading strategies. 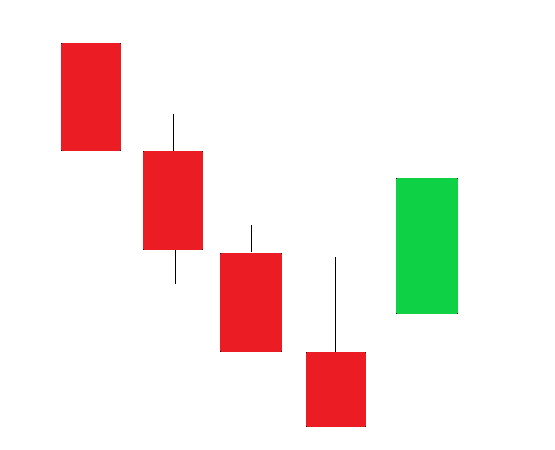 As mentioned above, a bullish ladder bottom consists of five candlesticks. Here is the exact definition:

The most common interpretation of the bullish ladder bottom is that it shows that the ongoing bullish trend has come to an end, and soon will turn bearish.

Bullish Ladder Bottom Meaning: What Does It Tell Us About the Market?

As with all candlestick patterns, the bullish ladder bottom shows us the forces that lie behind the movements of the markets. And as traders, we look to analyze these movements to gain a better understanding of the market and its mechanism.

Now, understanding the reasons behind a market move is hard, and sometimes impossible. However, by analyzing and watching markets we can gain valuable insights that can be used at a later stage, when we’re designing our trading strategies.

So, let’s see what the market may have been up to as it forms a bullish ladder bottom.

However, upon the fourth candle we start to notice that things are changing a bit. While the market still will close lower than it opened,  it seems like bulls attempted to take back control, judging from the high upper wick. And while bears eventually manage to push the market back down, the upper wick still tells us that market sentiment may have started to shift a bit.

As the fifth candle gaps up and forms into a bullish candle, we see that the sign of a change towards a bullish trend held true.

Here is an example of the bullish ladder bottom: 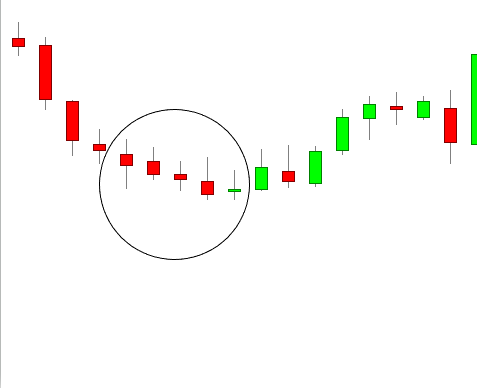 How to Trade the Bullish Ladder Bottom

While many beginning traders try to apply the patterns they learn about immediately, most experienced traders will tell you that it’s necessary to add additional filters and conditions.  The reason simply is that most candlestick patterns aren’t profitable enough on their own, and need to be validated with other forms of technical analysis.

In addition to this, you’ll also need to ensure that you use the bullish ladder bottom on a market and timeframe where it works well. Contrary to what many believe, candlestick patterns aren’t universal patterns that work on every timeframe and market. In fact, in some markets a pattern might work in the opposite way to what you may read in most textbooks.

Now, in order for you to know where to use a certain pattern, we highly recommend that you use backtesting!

Having said this, let’s take a closer look at some of the patterns and strategies that we’ve great experiences with for our own trading strategies.

The volume of a market provides a lot of clues that we don’t get by just watching price data. In that sense, it often is fair to say that adding volume to your trading is like adding another dimension.

Generally, a market move is considered more significant if it’s backed up by more volume, which means that more transactions took part in forming the move.

However, we’ve found that some patterns actually may benefit from forming with little volume, rather than with high volume.

Now, when it comes to volume conditions, here are some of our favorites:

Now, you may also come up with some volume filters that are tailored to the anatomy of the bullish ladder bottom pattern. Just to give an example, you may demand that the volume of the last, bullish candle is significantly higher than the volume of any of the bearish candle. Such an arrangement would show that many market players caught on as the market finally turned bullish, which could be a good sign!

Some markets like stocks and equities have quite strong tendencies to revert to their mean. This means that they tend to produce outsize moves, which are followed by a corrective move in the opposite direction.

Here are two of the most common ways to define an oversold market:

Let’s now have a closer look at some trading strategies that rely on the bullish ladder bottom. We’ll show you how we would go about to build a trading strategy, and as you will see it often doesn’t take more than a simple filter to make something worth your time.

However, keep in mind that you always have to carry out your own testing, preferably with backtesting. The strategies laid out below are merely examples, and to hold a chance, they must be applied to the right timeframe and market.

Having said this, let’s take a closer look at the strategies!

You could easily argue that what truly makes the bullish ladder bottom a bullish pattern, is the final bullish candle that gaps up. And with this being the case, we’ll pay the gap and its size some extra attention.

Now, the most logical thing would be to assume that a big gap shows that the bullish forces in the market are strong, so that’s what we’ll use for this strategy. To go long we’ll require that the gap is at least half the size of the previous candle’s body.

Then we simply exit the trade after 5 bars. 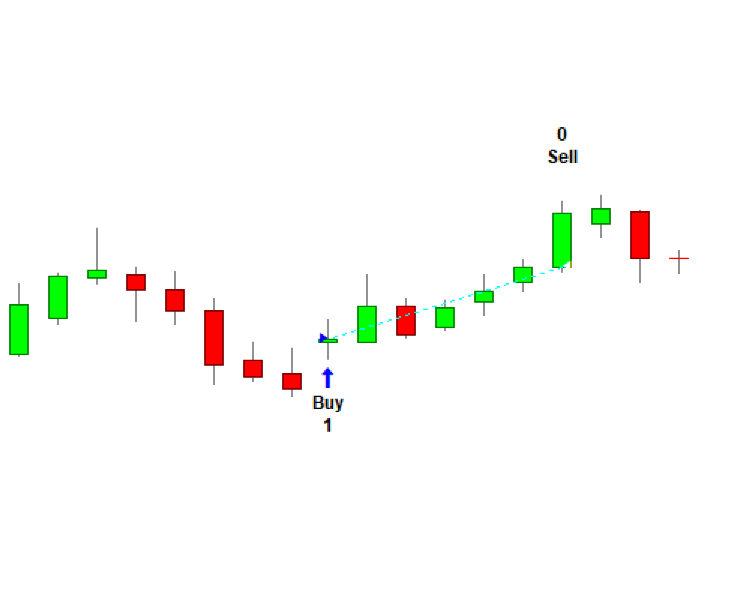 Sometimes you might want to wait a while to confirm that the market actually went your way, in order to reduce the number of false signals that you act on.

One way of doing this with the bullish ladder bottom, would be to require a breakout over the high of the pattern. Having such a condition in place in effect becomes a way to validate that enough momentum has built up for the new trend to continue for a long while. 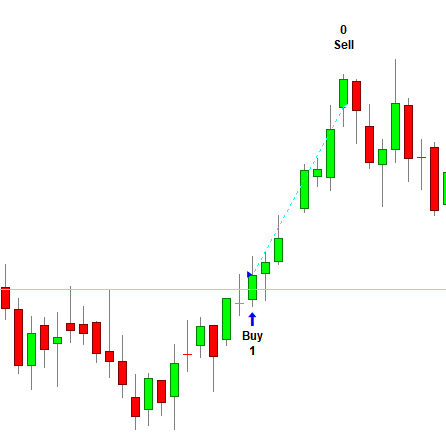 In this guide to the bullish ladder bottom, we’ve covered not only the meaning and definition of the bullish ladder bottom, but also how you could go about to trade the pattern live. Just remember to be careful, and always test everything extensively before you go live! Most traders forget to back up their observations with backtesting, and just end as losing traders.