4 Ways to Trade Oversold Levels (What Does It Mean When a Stock Is Overbought?)

Share 0
Tweet 0
Share 0
Share0
Tweet0
Share0
Table Of Contents show
1 What Does It Mean When a Market or Stock is Oversold?
2 Why Does Mean Reversion and Oversold Levels Work?
3 4 Ways to Tell if a Stock Is Oversold
3.1 1. RSI
3.2 2. Bollinger Bands
3.3 3. Lowest Close
3.4 4. Streak of Down Days
4 Which Timeframe is Best for Identifying Oversold Conditions?
5 Do Oversold Levels Work?
5.1 Oversold Trading and Stop Losses
6 Overbought vs Oversold
7 Conclusion

When it comes to trading, there are certain words that you will hear more often than others. And when it comes to some words, like oversold, they appear to be everywhere. So what does oversold mean?

Oversold refers to a market state when prices have gone down excessively, and therefore are likely to reverse to the upside in the near future. Although oversold is mostly used when analyzing stocks and equities, it can be used to describe other markets that share the mean-reverting traits of the stock market.

In this guide, you’ll learn everything you need to know about oversold conditions. This includes

What Does It Mean When a Market or Stock is Oversold?

Like we just mentioned, oversold refers to when a market has moved down an excessive distance, which means that a reversal of the trend is likely to occur sometime soon.

Another way of putting it is that the market is correcting itself after an exaggerated negative move. This type of behavior is typically referred to as mean reversion, and is one of the most popular trading styles among stock traders.

Mean reversion tries to capitalize on exaggerated moves by going long when the market has entered into oversold territory, in an attempt to ride the corrective move to the upside.

In the image below you see how the market moves up and down, around its mean or average, which is what we mean by mean reversion

Why Does Mean Reversion and Oversold Levels Work?

Mean reversion doesn’t work that well in all markets. Most of the mean reversion strategies you’ll find will be for the stock market, simply because equities tend to mean revert more than other asset classes do.

So why does mean reversion work well in the stock market, and not in others?

Well, one of the main reasons, is the psychology of market players.

The stock market is influenced by retail investors and traders to a degree that we might not see in other financial markets. This means that human traits, like greed and fear,  become more obvious and affect the price to a large extent.

Similarly, a market that has gone up too much is going to instill fear in market participants that they will lose the profits they have collected so far during the upswing. As a result, more people will decide to sell their positions, which increases selling pressure and makes prices head lower.

Thus, mean reversion could be said to be a consequence of greed and fear, and how it affects the behavior of market participants.

Still, it’s important to recognize that mean reversion, or reversion to the mean, is a phenomenon that can be found in other areas of life that aren’t affected by human behavior to the same extent as the stock market.

4 Ways to Tell if a Stock Is Oversold

Having covered what oversold means and what it tells us about the market, it’s time to have a look at some common methods traders use to define oversold levels in the market.

Now, even though you may do fine using just one definition, your results are going to vary a lot with the type of method you go for. Thus you’ll benefit from learning a couple of  approaches, and then see which one suits you best.

RSI is one of the most common trading indicators used by traders today, and was originally invented to detect oversold and overbought readings in the market.

In short, RSI oscillates between 0 and 100, where readings below 30 signal oversold market conditions, when used with the standard 14-period lookback setting.

In the image below we see an example of RSI applied to the chart, and how the indicator goes below the 30-threshold. 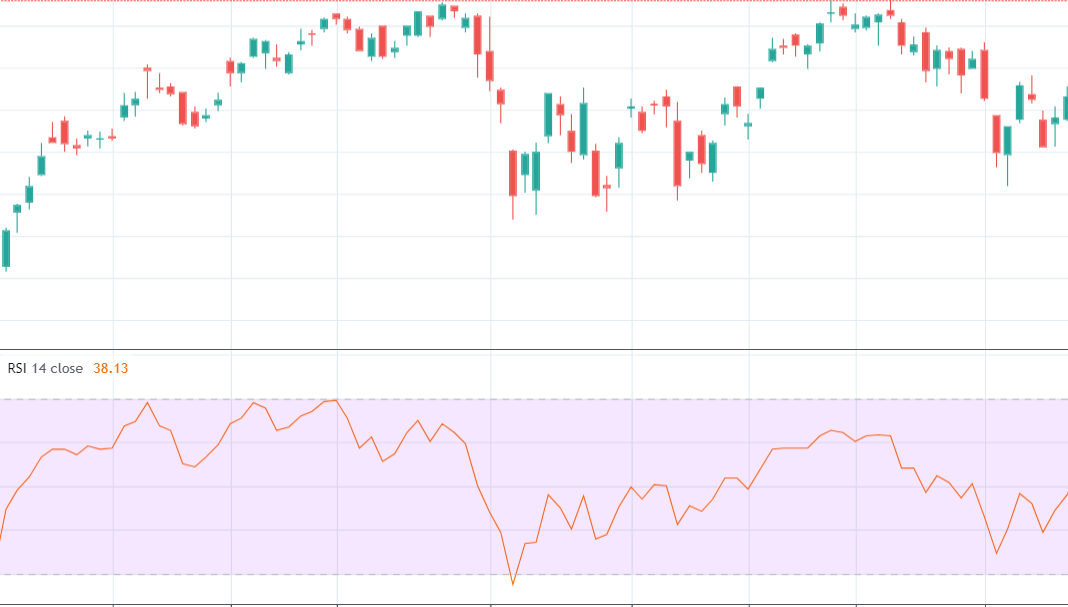 Important to note here, is that we haven’t got so much good experience with the standard 14-period setting. Most of the times we find that price swings in the markets are fairly short-lived, and subsequently need to be defined using a shorter lookback setting

Most of the time an RSI that’s set to somewhere between 2-5 does the job quite well. However, with a shorter lookback period, it’s important to remember to move down the oversold threshold, as extreme readings will become more common.

Below you see the two-period RSI, with the oversold threshold set at 10.

Bollinger Bands is a trading indicator that uses three bands to detect when a stock has deviated too far from its mean. The middle band of the indicator is a moving average, around which two outer bands are situated on either side at a distance equivalent to 2 times the standard deviation of prices.

This means that the width of the channel which forms between the two bands is going to vary depending on the volatility of the market. As a result, the oversold reading, which is indicated when the market moves below the lower Bollinger band, becomes adaptive and fluctuates with the varying volatility levels of the market. For instance, during a market crash, the channel will widen quite a bit.

In the image below you see how the market gets oversold and goes below the lower Bollinger Band, before it finally turns up again.

One very simple yet effective method is to look for when the market performs a new lowest close. In fact, the famous double seven trading strategy uses such a condition for one of its main entry conditions.

Generally, you want to look for new lows that occur in an ongoing positive trend where the positive sentiment is going to help push the market higher.

4. Streak of Down Days

Another method that may be quite effective is to consider the number of days that a security closes lower. Typically, market players don’t tend to have the perseverance that’s required to push a market down for more than a couple of days, before letting through a small pullback.

While you may not be able to pinpoint the exact reversal with this method, or any other trading method for that matter, you know that the chances of a reversal from oversold levels increase the more days that the market has closed lower.

Which Timeframe is Best for Identifying Oversold Conditions?

Therefore it’s critical that you learn how to validate your strategy ideas using backtesting, to ensure that they show some sort of validity. Otherwise, you risk trading strategies that simply are losing strategies, without knowing it beforehand!

Getting back to the best timeframe for oversold conditions, we still can give some general recommendations as to where you should look.

We recommend that you look for mean reversion strategies mainly on the daily timeframe. Being the bar setting that most market players reference in their daily trading and investment activities, it holds quite a lot more significance than other arbitrary timeframes, like 5 minute or 10-minute bars.  In other words, many people are watching the daily timeframe and act on oversold signals that form, which helps push prices higher.

In addition, the daily timeframe contains a lot less market noise, since all the random market movements tend to even out during the day. This, in turn, makes it even more significant and easier to read.

Many traders feel quite frustrated as they continuously see how prices become oversold, and then just continue straight down.

This observation isn’t flawed, but showcases one of the disadvantages of mean reversion strategies, which is that a market that is oversold always can become more oversold.

This means that we as mean reversion traders are trying to catch falling knives, and should expect prices to continue down a bit before they reverse. The only thing that matters, in the end, is that the market finally turns around, and enables us to exit a price that’s higher than our entry.

This puts a lot of pressure on the exit mechanism to be able to determine when the reversion to the mean is complete, so that you don’t get out of the market before the move you’re waiting for has occurred.

Another important aspect to remember is that the stop loss needs to be placed at a quite long distance from the entry, to give the trade enough room to develop. Otherwise, you risk getting stopped out way too often, which will severely impact your profits.

So, since oversold levels don’t mean that the market is about to turn around right at the spot, it appears to some traders that the whole concept of oversold conditions doesn’t work, when it actually does.

If you have heard of oversold levels, you probably haven’t’ escaped the concept of overbought market levels either.

Overbought simply refers to when a market has moved excessively to the upside and might reverse soon as a result. In that sense, it’s the opposite of oversold market conditions.

Just keep in mind that it’s much easier to go long on oversold levels than to short overbought levels. This has to do with that the positive drive of the stock market, which helps prices to recover from oversold levels, works against you as you’re shorting the market.

This is the reason why we recommend that beginners never start their trading career by going short, but focus on long-only strategies to increase their chances of making money!