Some indicators need to be used with other indicators to formulate a trading strategy, and the ADX seems to fall into that category. The ADX doesn’t work on its own but works very well as a “number two” indicator for other indicators.

What is the ADX?

The ADX (Average Directional Movement Index) was developed by a popular commodity trader, Welles Wilder, and released in his 1978 book titled New Concepts In Technical Trading Systems. As with other technical indicators, most trading platforms have the ADX indicator, which you can place on the chart.

The indicator consists of three components:

The indicator measures the strength of the underlying trend and not the direction of the trend.

How the ADX indicator is interpreted

The bigger the difference between the DMs, the higher the readings on the ADX, and the stronger is the trend, irrespective of the direction. According to Wilder, an ADX reading below 15 indicates a non-trending market, while a reading above 20 shows a trending market. The indicator lags the price action, being a derivative of the price data.

Does the ADX work? What backtesting results show

While there are many ways the ADX indicator can be used, does it work? Let’s take a look at some of the ADX-alone strategies and their backtesting results:

The equity curve from a 10-day ADX tested on Amibroker looks like this on the S&P 500 (no commissions and slippage): 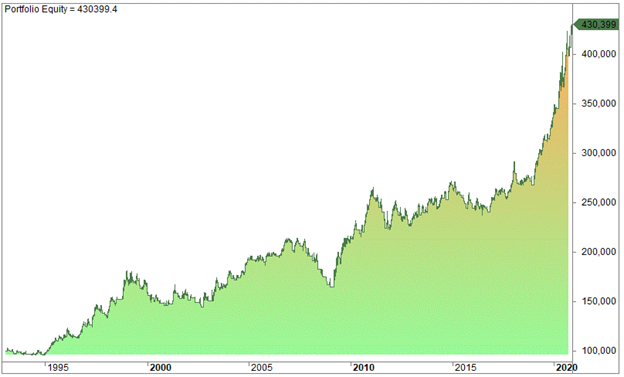 Directional crossover system on the S&P 500.

The summary of the results are as follows:

This strategy uses a breakout of the ADX readings, and it goes like this:

Optimization showed that the best result on the S&P 500 is gotten with 35 days for the DMs (DI) and 15 days for the ADX high/breakout. 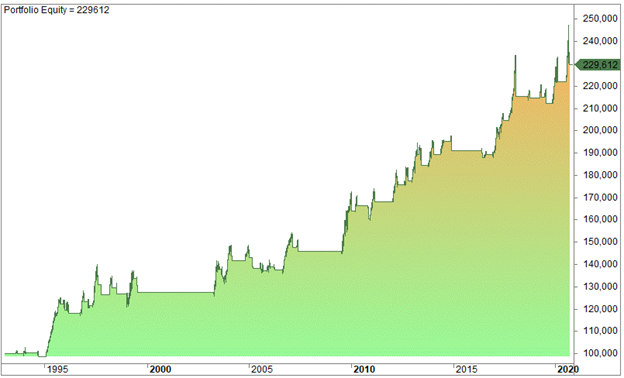 ADX sets a new x-day high while the DM+ is above DI-.

Combining ADX with another indicator

As you can see, the ADX doesn’t perform so well when used alone. However, it can be combined with other indicators, especially oscillators that are good for mean-reversion strategies. The idea would be to use the ADX to identify a strong trend and use the mean-reversion indicator to identify good entries. Some of the indicators you can combine with the ADX include the Williams %R and RSI.