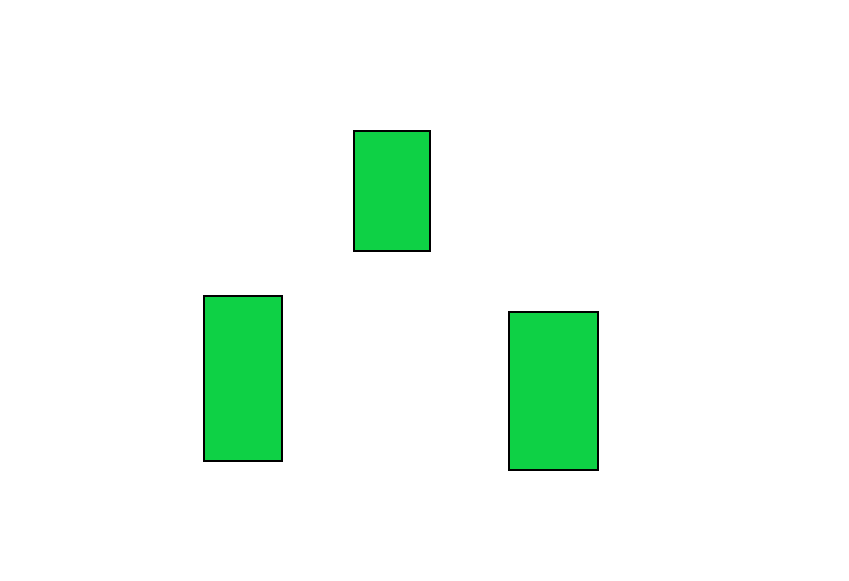 Are Gaps Always Filled? (Statistics Included)! (What Does Fill the Gap Mean?)

In trading, you’ll find that many people make assumptions regarding a lot of things. Candlestick patterns, chart patterns, and various commonplace trading strategies that are given a certain meaning are perfect examples of that!

When it comes to gap trading, there are some assumptions that are made as well. The one which perhaps stands out the most, is that most gaps are filled. So, does this hold true?

In this article, we’ll show that gaps are not always filled. However, the gap-fill rate varies depending on a lot of factors, including the market and timeframe traded, as well as how long time you give the market to fill the gap.

In this article, we’re going to look closer at what a gap is, and how it’s interpreted by most market players.

However, most importantly, we’re going to look at some historical simulations to get a final and clear answer to if gaps tend to fill or not!

A gap could be regarded as a hole in the price chart, where no trading took place. In other words, you could say that the price “jumped” a certain distance, meaning that it closed at one price, and then opened higher or lower, without touching the intervening levels.

What Does Fill the Gap Mean? 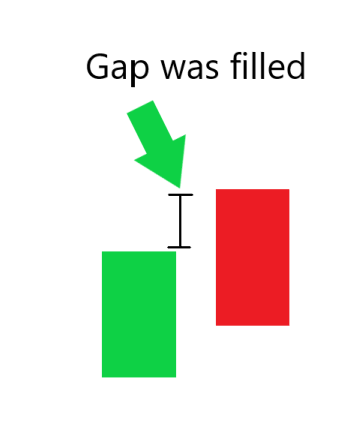 Well, when a market “fills the gap”, it simply means that it fills the empty space which is the gap itself. So if the market gaps higher, it will fill the gap first when it gets back to the previous day’s close.

Is Gap Trading Profitable?
How to Fade Gaps

Why and When Do Gaps Form?

Gaps usually form as a result of low liquidity, or over-night, as the market closes and then reopens the next day.

Gaps also tend to occur between the close of Friday and the Monday open. The reasons are similar to those of regular overnight gaps. However, in the stock market, you also see how many market players close their positions by the end of the week. This is in order to not have their money in the market throughout the weekend, would anything unexpected happen. As a result, many will want to reenter on the Monday open, which will cause increased buying pressure, and lead to a positive gap.

In general, the less liquid the market, the more and bigger the gaps. This is because less liquidity means that prices are more prone to slipping, since there might not be anyone to take the other side of the trade at the bid price or closely neighboring prices. As a result, the market gaps to get to the nearest offered price.

This also means that gaps in intra-day timeframes, like the 5 or 10-minute timeframe, are much more common in illiquid markets. The liquidity, as in the number of transactions taking place, simple gets fewer the lower the timeframe, which increases the probability of gaps occurring.

To name an example, you will struggle to find gaps in the heavily traded S&P-500 futures contract. On the other hand, gaps will be ubiquitous if you look at much less liquid contracts, like the Rough Rice Futures market.

In the two images below we show the 5-minute chart of the S&P500 contract, followed by the Rough Rice Futures market. As you see, there is a huge difference!

Fade and Follow: How To Trade Gaps (Important Terminology)

When traders spot a gap, they have two options:

Of course, you always have the option of staying out of the market. In addition, you usually employ more conditions and filters before taking a trade, since the baseline performance, as you will see in the tests below, usually is quite limited

Fill Rate of Gaps in the Market: Market Study

With this information out of the way, we’ll perform a market study to get some statistics on the actual fill rate of gaps.

Here are the settings we use:

When doing the tests below, it’s really important that we keep the gap threshold in mind. The gap threshold simple is the minimum distance the market must gap, to be included in the statistics.

In our tests, we’re going to look at three different gap thresholds:

When running the tests, we get the following statistics for bearish and bullish gaps. Percentages refer to the fill-rate. For instance, 20% means that 20% of all gaps were filled.

As you see there really is not a big difference between the two.

And finally, we take a look at larger gaps of 1% or more.

So, what conclusions can we draw from the statistics above?

Well, it certainly seems like most gaps aren’t filled during the first day of trading. Only when we included gaps as small as 0,1%, we got results which indicate that more than half of the gaps were filled. However, with such a small gap size, we really couldn’t have expected anything else. Small distances are covered easily by the market and its erratic moves. As such, these fills are probably just caused by the random moves of the market.

Important to keep in mind here, is that the results we got were for the SPY ETF. While this is one of the most popular securities tracking the S&P-500, there could be differences in the price quotation as well as the historical market data, when compared to other popular securities. The differences shouldn’t be too significant, but it certainly is important to understand that they exist.

Another important aspect to remember is that the fill-rate of gaps will vary, depending on how much time you give the market to fill the gap. In the test above we only counted fills that appeared within one day after the gap.

What Happens After a Gap?

With these statistics out of the way, you might want to know what tends to happen after a gap has formed. After all, the gap-fill rate doesn’t tell us the size of the bearish or bullish moves, which could be interesting to know.

As such, here follow two charts that show the historical performance of the S&P, the day following the gap. 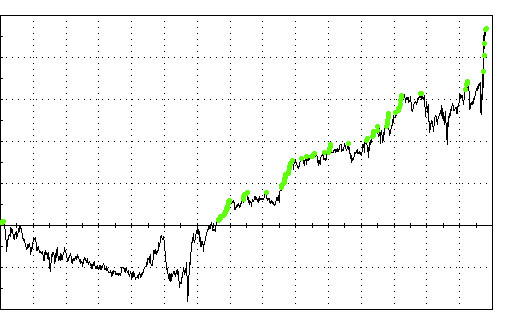 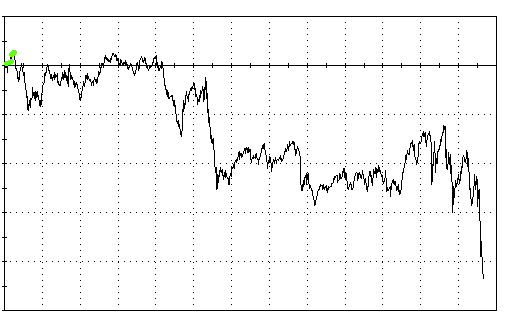 As you see, there is a substantial difference between the two.

Days with bearish gaps are usually followed by a negative move the following day, while the opposite is true for bullish gaps.

Although none of the equity curves above are tradable in their current form, this certainly is valuable information we can implement in our own trading!

Yes, they do! Even though the results you’ve been presented with above don’t suggest that gaps on their own can be traded successfully, you certainly can build great gap strategies. You have to remember that there are endless variations of filters and conditions you could add to remove false trades. As such, if you manage to find the right conditions, it is possible to find a profitable trading strategy.

For instance, the strategy below, which is a day trading strategy, relies on opening gaps, with a special twist. 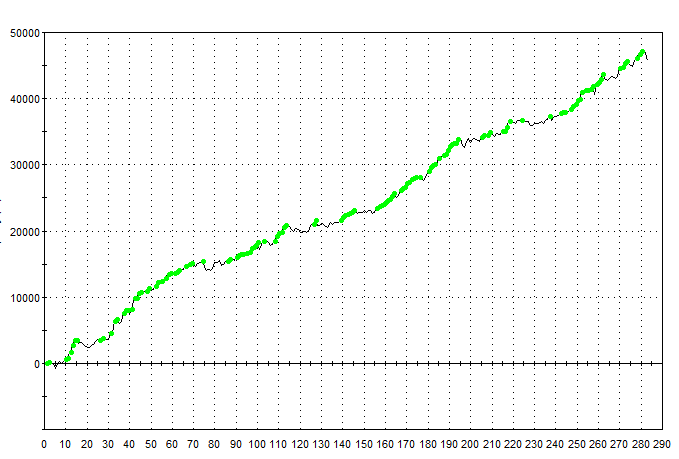 Here are some examples of various conditions and rules you could look to implement in a gap strategy:

For those who want to learn how to create a trading strategy themselves, we really recommend that you look closer at our guide to building trading strategies. It really contains a lot of useful information on all the steps that are involved in creating a trading strategy, and we think you will find great value in it!

A gap is when the market jumps from one price level to another, and leaves the intervening prices untouched. Typically, gaps form overnight as the market reopens for the next trading session. However, in illiquid markets, it’s common to see gaps form also intraday.

When it comes to whether gaps are filled or not, it depends on many factors. However, according to our tests, most gaps seem to not be filled, at least within one day after they occurred.

Another key point, is that positive gaps tend to beget a positive move in more cases than a negative gap. This certainly is information that could prove valuable for your own trading!

If you like to learn algorithmic trading from traders who trade full time themselves, we highly recommend that you have a look at our trading courses. As a student, you not only get to learn the proven method we use ourselves, but also get a number of trading strategies to kick start your trading!