Candlestick patterns have become the preferred analysis tool for many traders. Being easy to read and carrying their own distinct meanings, they simply make reading the markets easier. One candlestick pattern is the bullish three line strike.

This guide to the bullish three line strike will cover everything you’ll need to know about the pattern, such as its definition, meaning, and how you improve it for live trading.

A bullish three line strike consists of four candles. Of these, the first three are bullish, while the last is bearish. Here follows the exact definition.

The general interpretation is that a bullish three line strike marks a pullback in a bullish trend, which soon turns up again.

What Does the Bullish Three Line Strike Tell Us About the Market?

Since all candlestick patterns have unique shapes, they also represent unique price moves in the market, which in themselves provide a lot of clues about the prevailing forces. And as traders, we’re very interested in knowing about the forces that shaped the market, to have a better chance of predicting the future correctly. However, it’s not easy to accurately understand the reasons behind a market move.

Now, while this might be the case, analyzing and watching market data still is a valuable pastime! You will inevitably hatch quite a lot of new trading ideas of which some may become the foundation for a new trading strategy!

Having said this, let’s see what a bullish three line strike tells us about the overall state of the market!

Coming from a bullish trend, market sentiment is mostly bullish. In other words, most market participants believe in ascending prices. As a result, the market forms the first three bullish candles.

However, with the market having gone up for quite a long time, it’s becoming overbought. That is, the market simply has gone up so much so that more people are starting to look to sell off some of their positions in anticipation of a pullback. In other words, market sentiment is starting to become more bearish.

As the next candle opens, we see how buyers push the market downwards in one, long candle. And while the move was sudden and violent, most market participants still are bullish given the rising trend. As a result, prices continue to head higher shortly thereafter.

Here is a real-world example of the bullish three line strike:

Bullish Three Line Strike: How to Trade the Pattern

If you believe that you just may take the bullish three line strike and trade it as is, you should think again. Most candlestick patterns aren’t accurate enough to be used on their own and need other forms of technical analysis to chime in for validation.

Another key aspect is that you need to trade the pattern on a market and timeframe where it works. Unfortunately, candlestick patterns aren’t universal in that they work on every market. Therefore you’ll have to use backtesting to confirm that the bullish three line strike works with your preferred market!

With this said, we’ll now share some powerful methods that you may use to improve on the bullish three line strike. These are methods that we’ve had quite a lot of success with ourselves, and believe could be used successfully together with the pattern.

Market sentiment indicators, or market breadth indicators can be of great help to filter out bad trades, but still, these are quite overlooked by most people.

In short, market sentiment indicators get their data from several securities, to give a broader picture of the market action. For example, there are breadth indicators that look at the number of advancing and declining stocks on an exchange, outputting a ratio that we can use to gauge the strength of a whole market. Other sentiment indicators may look at the volume of advancing and declining stocks, just to name another example.

Now, one common way to use market sentiment indicators is by comparing the strength of the security you’re analyzing to the overall strength of the market. For instance, if your stock is forming a bullish three lines strike while most other stocks are rising, your stock is currently weaker than the market, which may be a bad sign.

Another quite powerful way to remove losing trades is with volume. Generally, a market move is considered more significant if it’s carried out with high volume. In other words, a bullish three line strike where the last bullish candle is formed with low volume might be more positive than the other way around.

Now that you have got a quick introduction to two powerful methods to increase the performance of most patterns, it’s time to move on to some example trading strategies that rely on the bullish three line strike.

And while the strategies below may not be ready to trade in their current shape, they are great examples of how you should go about when building your own trading strategies.

Exactly as with volume, the range sizes of the candles making up a pattern may be good indicators of its reliability. That is, if the range of a candle is big, it’s more significant.

Then we’ll exit the trade after 5 candles. 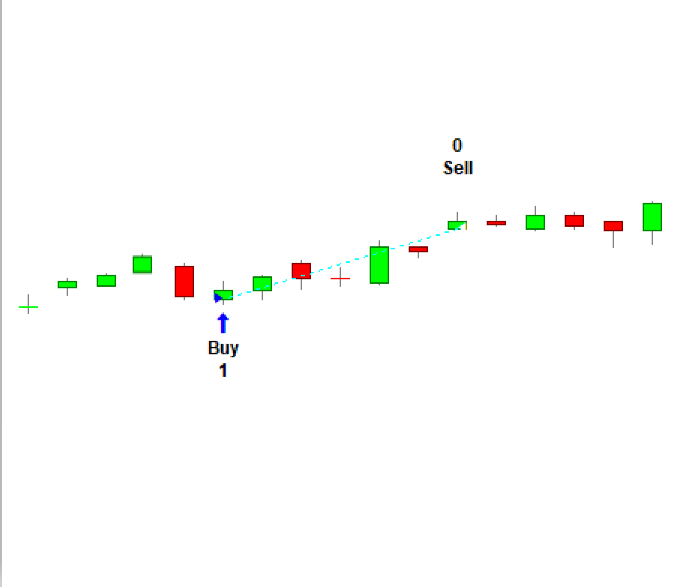 Generally, a positive gap is considered a strong bullish signal that should be taken seriously. And since that’s the case, we thought that it could beneficial to combine a gap with the bullish three line strike.

Now, we’ll demand that the last bearish candle opens with a bullish gap. This will signal that bulls were in for the fight even in the last candle, and should make the pattern more powerful.

Here are the rules to go long:

And as in the previous example, we’ll exit the trade after 5 bars.

By reading this guide, we hope that you have gained a solid understanding of the bullish three line strike and its applications. However, it’s paramount to be aware that patterns and strategies of all kinds need to be validated before traded live. As we touched on earlier, one of the best ways to do this is through backtesting. In our guide to building a trading strategy we go deeper into this topic!

If you’re interested in guides to profitable trading, we recommend that you have a look at our guide to algorithmic trading. Our swing trading guide may also interest you!