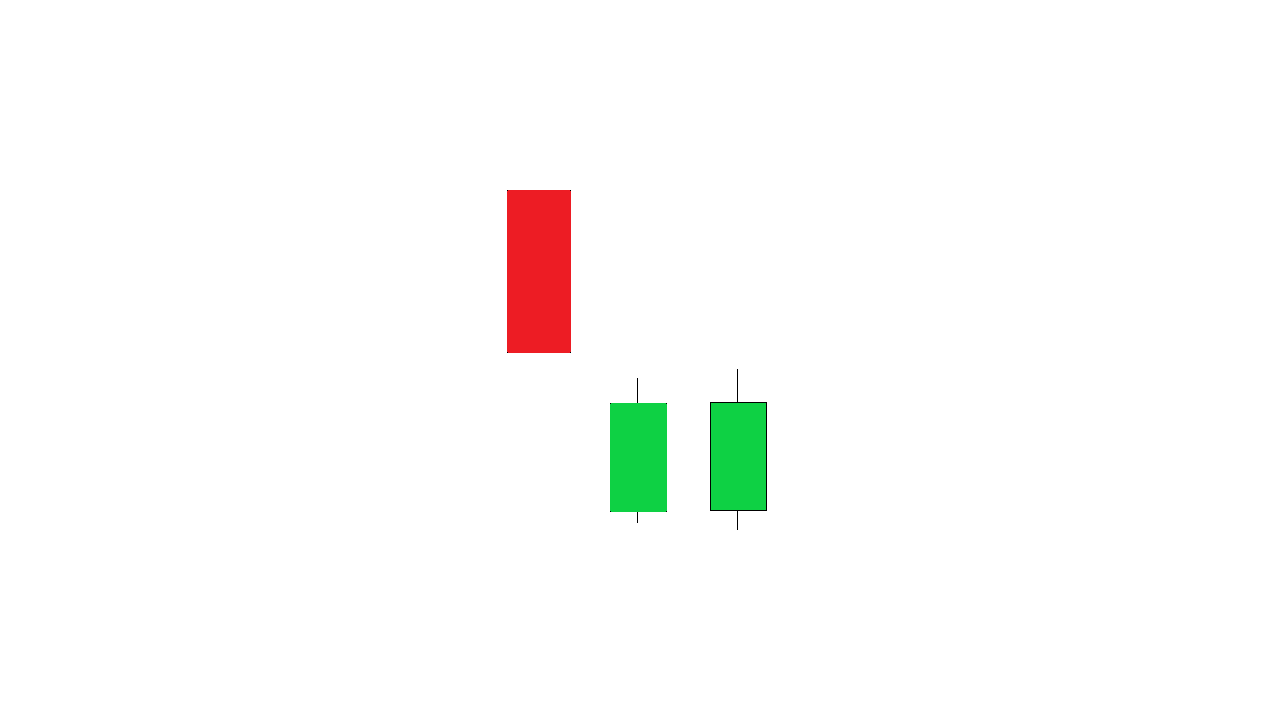 Candlestick patterns have become very popular among new and seasoned traders. Being easy to spot, there are many different variations that all have their own unique meanings. One candlestick pattern is the bearish side-by-side white lines.

Bearish side by side white lines is a bearish continuation pattern that appears in an ongoing downtrend. The pattern consists of three candles. The first one is bearish and followed by a positive candle that starts with a gap to the downside. The third candle opens and closes at or near the same levels as the previous candle.

Bearish Side By Side White Lines Definition 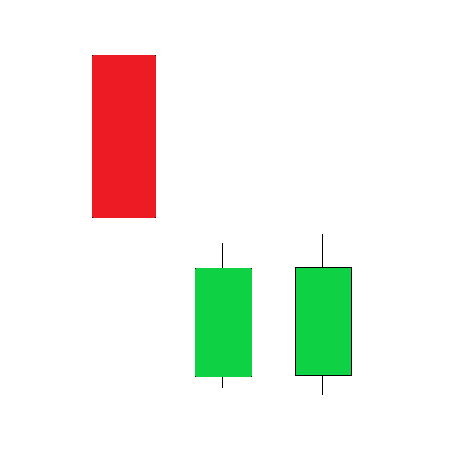 Bearish Side by Side White Lines

These are the conditions that need to be met for a bearish side by side white line to form:

What Does a Bearish Side By Side White Lines Mean?

As candlestick patterns are representations of market data, they show us how the market acted at any given moment. And this is information that is highly valuable when we try to analyze the markets, in an attempt to discover where it’s headed.

While it’s hard to know exactly what happened in the market at any given time, watching price and trying to understand what happens is a great exercise. Eventually, you will start to notice recurrent patterns, that may even become a trading strategy of yours!

Having said this, let’s try to understand what happened in the market, as it formed a bearish side by side white lines!

As the market comes from a bearish trend, market sentiment is bearish, and the general belief is that prices will continue down. As such, traders and investors sell their positions, or even go short, to reap some profits from the declining market. The selling pressure pushes the market lower, which begets the first bearish candle of the pattern.

The bearish sentiment spills over to the next day, and causes the market to gap down.

However, since the market now has gone down a significant amount in a short time period, some traders start to sense that it has become oversold. As such, the coming two bars becomes a fight between buying and selling pressure, which no side seems to win. The market first goes up, only to gap down and then go up once more.

As the third candle of the pattern forms, it’s apparent that buyers weren’t strong enough to bring a change to the overall market trend. The last bullish candle doesn’t manage to get beyond the previous candle’s high to cover the gap, which is a major resistance level. As such, the market continues down, and the bearish trend remains unchallenged!

Bearish Side By Side White Lines Example

Here follows an example of the bearish side by side white lines pattern: 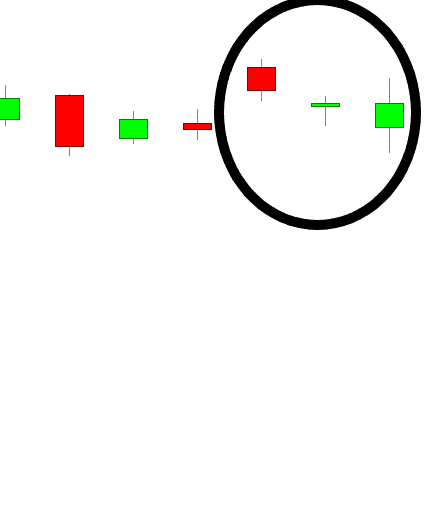 Bearish Side by Side White Lines Example

How to Trade Bearish Side by Side White Lines: How to Improve the Pattern

Most candlestick patterns, even if they are believed to have a special meaning, can’t be traded right away. They simply aren’t profitable enough and need to be enhanced with a filter or additional condition. You also need to ensure that you trade the pattern on a market and timeframe where it shows some merit.

To see in which market and timeframe you may trade the pattern successfully, we recommend that you use backtesting.

Having covered this, let’s look at some filters and conditions that we’ve had some good experiences with in our own strategies!

One key concept in trading is volatility. The strength and size of the market’s moves often have a big impact on the performance of a pattern or signal. Some strategies will work great only in volatile settings, while others will work better when the market is calm.

Volatility filters are part of many of the trading strategies we trade at the moment and tend to work well across most markets.

When gauging volatility in the markets, you could go about in several ways, of which the two most common approaches are to use trading indicators, or just watch price.

When it comes to trading indicators. one of our favorite ones is the ADX indicator. When ADX shows readings above 25, the trend is considered a strong one, while readings below 15 indicate a calm market.

In our definitive guide to the ADX indicator, you will learn more about the indicator and its uses.

Now, if you instead choose to watch price, you may look at the daily ranges of the bars, and compare them to the average of the historical daily ranges.

In fact, there is a trading indicator called Average True Range (ATR)  which does this for you. Just as it sounds, it outputs a measure of the average true range!

Another way to improve the accuracy of a pattern, is by looking for seasonal patterns.

In short, seasonality and time-based tendencies mean that some markets tend to perform better during certain periods than others. Those periods could be months and years, or shorter periods, like one day of the week or the time of day.

In some markets, these effects are very pronounced, while they’re weaker in others. One example of a strong seasonal tendency is that in heating oil, where the demand spikes during winter, when people consume more of it to heat their homes.

Now, if we know what these seasonal tendencies look like in the market we’re examining, we may use that to time our entries better. For example, if a bearish side by side white lines appears during a period of the year that’s typically quite bearish, the odds of the signal being profitable might increase.

Similarly, if it occurs at a time when the market usually is quite bullish, we might consider not taking the signal.

When we look for seasonal tendencies, this is usually where we put our focus:

Again, the best way to find out what works best here, is with backtesting!

Bearish Side by Side White Lines Trading Strategies

Now that we have shown you two ways in which you can improve the bearish side by side, we wanted to have a closer look at some trading strategies that are based on the pattern.

While the strategies shown here aren’t ready for live trading, they are perfect examples of how we would go about to tweak and modify the bearish side by side white lines into something that might work in the markets.

Trading Strategy 1: Bearish Side by Side White Lines With Gap Condition

One important part of the bearish side by side lines pattern is the gap that occurs between the first and second candlestick. As such, it might tell us quite a lot about the state of the market.

Following this, we could benefit from demanding that the gap should be big, to take a trade.

And that’s what we do in this trading strategy. More specifically, we demand that the gap is bigger than the average true range. 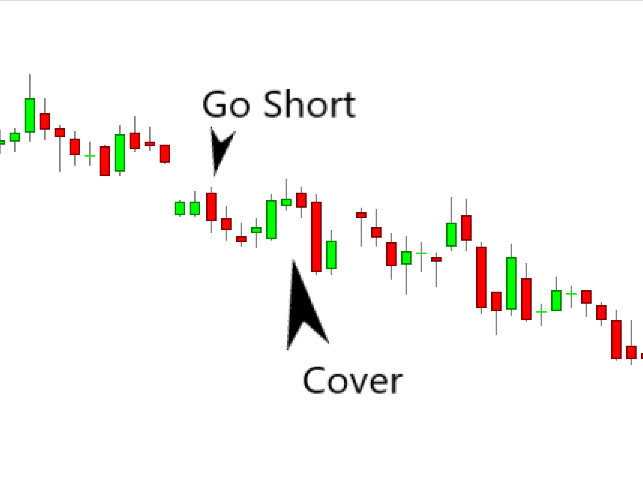 Bearish Side by Side White Lines Trading Strategy

Trading Strategy 2: Bearish Side by Side White Lines With Moving Average Filter

Since the bearish side by side should follow a downtrend, it would be quite logical to make use of some type of trend filter. Then we can ensure that the long term market trend actually is bearish, and will support our bearish outlook on the market!

As such, we’ll use the 200-day moving average, and demand that the market is below the average to take a trade.

Then we exit the trade after 5 days. 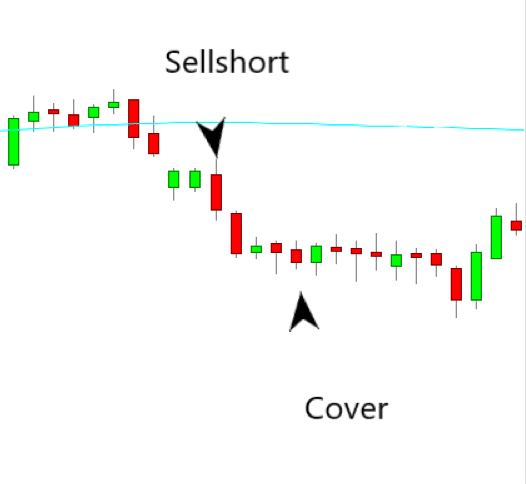 Bearish Side by Side White Lines Trading Strategy

In this guide t the bearish side by side white lines pattern, you’ve learned its meaning, definition, and how to improve the pattern. In addition to this, you’ve also got two example strategies to use as inspiration!

As a final piece of advice, we want to mention the importance of always testing EVERYTHING before you trade it with real money. Finding a real edge is hard, and very little work as well as you might have hoped for.