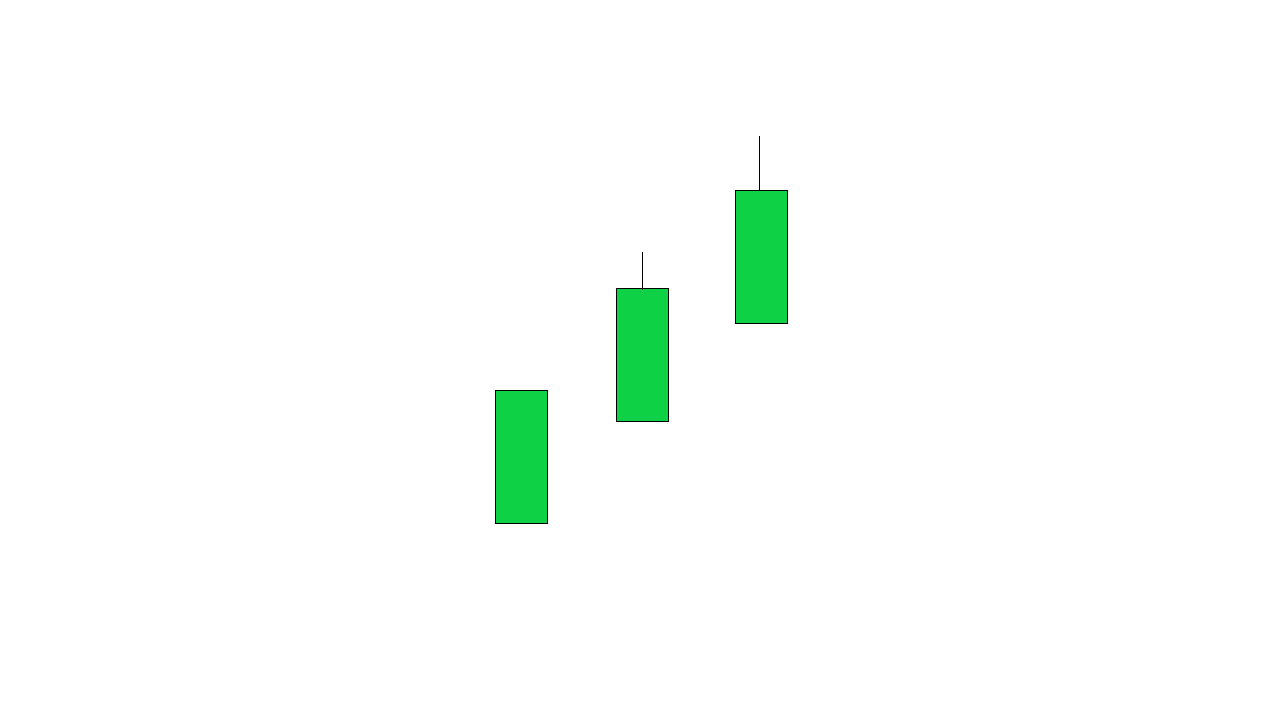 Candlestick patterns are some of the most popular ways to analyze the movements of markets. With their colorful bodies and eye-catching wicks, they are of great help when it comes to quickly discover and identify different patterns and signals. One such pattern is the advance block candlestick pattern.

An advance block is a three candle candlestick pattern that’s traditionally considered a bearish reversal pattern. However, some suggest that it acts more like a bullish continuation pattern.

In this guide to the advance block, we’ll cover everything you need to know about the pattern, such as its meaning, definition, and tips on how to trade it live.

We’ll also discuss whether the advance block should be seen as a bullish or bearish signal, since many claim that it works better as a bullish continuation pattern. 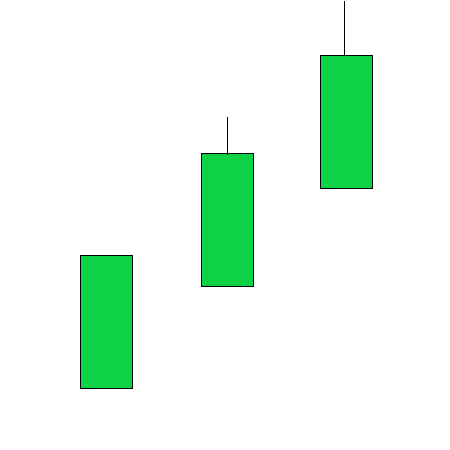 An advance block consists of three candles and forms in an uptrend. Here are the conditions that have to be met:

Is the Advance Block Bullish or Bearish?

As we’ve touched on already, the traditional interpretation of the pattern is that it’s a bearish reversal pattern. However, some suggest that it instead signals a coming bullish move.

So what view should you adopt?

Well, there is no right or wrong answer here. The performance of any pattern varies greatly depending on the market you apply it to. Following this, the advance block pattern could be a positive signal in one market, but a negative signal in another market.

In order to know what applies to your market, you must perform a test to see how the advance block has fared on your market historically.

We recommend that you use backtesting since it’s a quick and easy way to test the performance of most patterns and signals. Our complete guide to backtesting goes into backtesting in greater detail.

Every candlestick tells us a unique story about the market state in which it formed. This means they not only provide a visual clue about the exact moves of a market, but also what happened inside the market.

Now, it might be hard or impossible to know exactly why a market performed as it did. However, by trying to analyze and understand why a market moved as it did, we will start to increase our understanding of the market and its mechanisms.

And by scrutinizing market data, you’ll also start to note recurrent patterns, which may even lay the groundwork for an upcoming strategy. In fact, many of our trading strategies have come about this way!

So let’s try and see what the market has been up to as it forms an advance block!

The market is in a bullish trend which means that market sentiment is overwhelmingly positive. Most traders and investors believe that the positive trend is here to stay, and add to the buying pressure.

As a result, the first candle of the advance block becomes a long bullish candle.

However, as the trend now has persisted for quite some time, more and more market participants are becoming worried that a correction might be on its way. As a result, buying pressure starts waning, albeit still remains positive. As the market attempts to head higher, sellers stand ready to interfere and release selling pressure that keeps the market from moving higher. This, in turn, pushes the market lower and gives rise to the upper wicks.

All in all, this tells us that the market is becoming depleted of its bullish strength, meaning that there is a great chance that we’ll see a dip soon!

Here follows a real-world example of the advance block pattern. 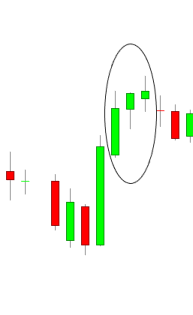 How to Trade the Advance Block Pattern

After learning about candlestick patterns like the advance block, many traders dive headfirst into the markets and act on the pattern without hesitating.

While this might seem tempting, this is something most experienced traders never would do. Most patterns taught online can’t be traded in their original form, and must be tweaked to hold any edge worth trading.

Now, in this part of the article, we wanted to share some quite powerful methods that we’ve had great experiences with ourselves.

However, as with every strategy or pattern you’ll learn, it’s highly dependant on the market and timeframe traded. One filter or method that works on one market most likely isn’t going to hold any significant edge when applied somewhere else.

As a result, it would be highly irresponsible of us to claim that some methods work better than others. This also is the reason why we highly recommend you use backtesting to ascertain where the real edge lies.

Having said this, let’s have a look at the filters!

In trading, volatile is one of those concepts that tend to show merit in a lot of markets. In that sense, it could be said to be a universal concept, which is not so strange, considering that volatility is inherent in anything that moves.

Now, the success rate of a strategy or pattern like the advance block could vary greatly depending on the current levels of volatility. For example, some patterns work great only in high volatility conditions, while others work better when the market is calm.

While it’s impossible to say that the advance block would work better in high or low volatility settings without knowing the market, it might be tempting to assume that high volatility is favorable.

The reason is that markets like stocks and equities tend to revert to their mean, meaning that they perform an exaggerated move in one direction and then fall back. And if the advance block was formed with high volatility, it tells us that the market is more likely to have gone too far to the upside, meaning that we are helped by the market’s mean reverting traits.

Here are our two favorite tools when it comes to gauging volatility: 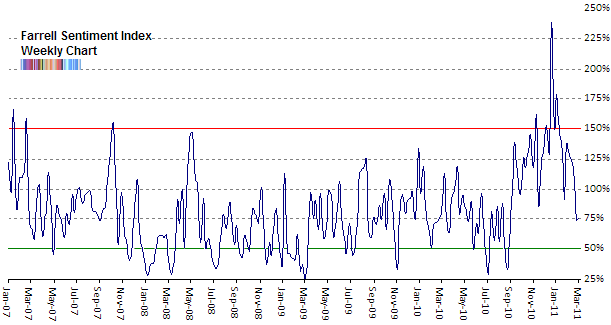 In addition to the price chart, there are many other data streams that you may use in your analysis. And the fact is that most traders either don’t know about them, or haven’t cared to incorporate them into their analysis.

Some of the most common external data streams are market sentiment indicators. In short, these attempts to give a broader picture of the current market situation, by incorporating a larger share of the market in their calculation.

Having recognized this, we may add the overall state of the market into the mix. For example, if the advance block was formed at a time when most stocks actually were declining, we might not want to short the pattern. As a matter of fact, the security we’re analyzing shows relative strength, and could ascend quickly if just the overall market climate turns more positive.

Now that you know two powerful methods to increase the accuracy of the advance block, we wanted to just show you a couple of example trading strategies.

Just like with everything we’ve shown you so far, the effectiveness of the strategies mentioned is highly dependant on the market and timeframe. As we told you earlier, we recommend that you use backtesting to see what works in your market!

Having said this, the following two strategies will be a great opportunity for you to see how we would go about when creating a trading strategy. As will become apparent, you really don’t need that many conditions!

Sometimes, volume has a significant impact on the performance of strategies and patterns. High volume often means that the pattern was backed by more market participants, making it more significant.

Now, in the case with the advance block, we might want to see waning volume as the pattern forms. That way we draw the conclusion that the market is losing in strength, which adds to our bearish view.

So, to take a trade we require that: 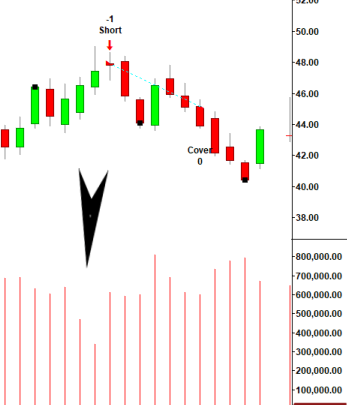 As we mentioned earlier, stocks and equities tend to revert to their mean once they’ve moved excessively to the upside. And by using a filter that reflects this, we can capture this tendency.

To be more specific, we’ll use the RSI indicator, and demand that it’s higher than 70 before taking a trade. If you aren’t familiar with the RSI, you may be interested in our complete guide to the RSI indicator.

So, the rules to short become that:

Then we exit once RSI crosses below 50. 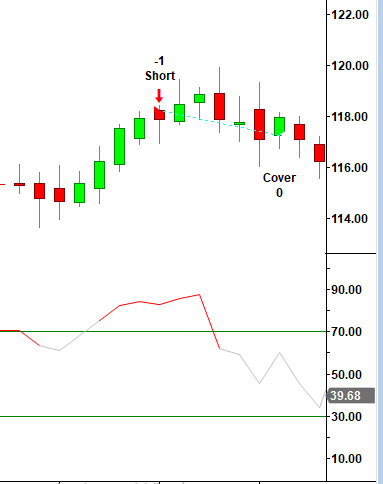 In this guide to the advance block, we’ve covered not only how to identify the pattern, but also how it could be used in live trading.