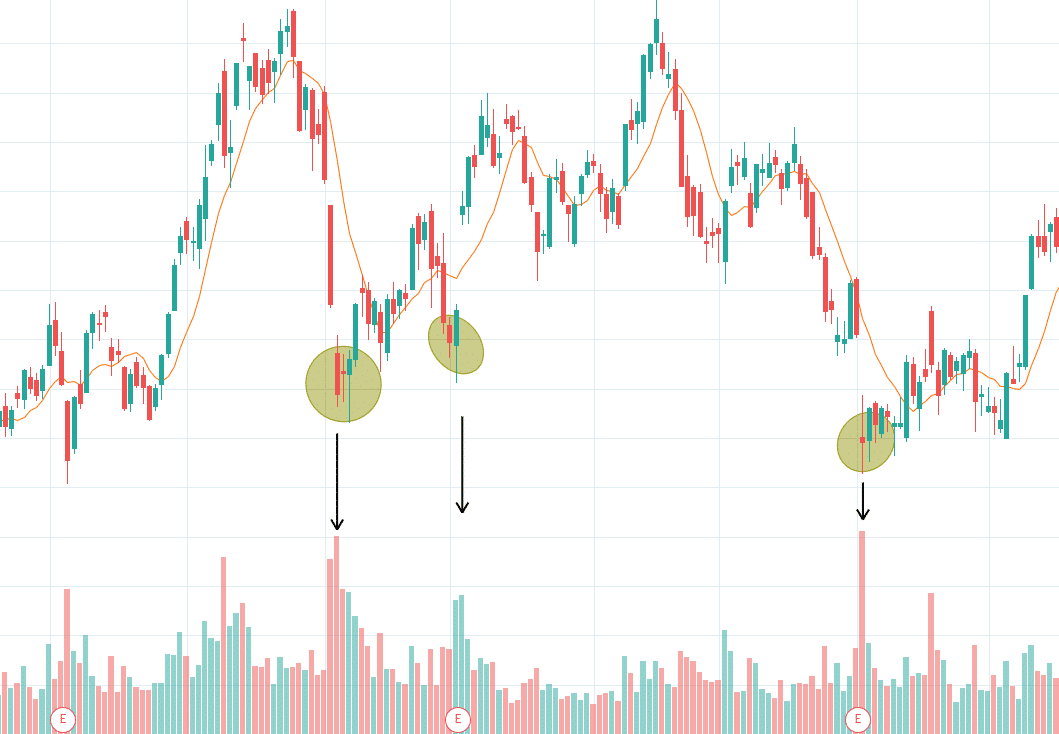 Last Updated on 20 September, 2020 by Samuelsson

Swing Trading is a very popular form of trading since it does not require an extreme amount of time. With a good trading strategy, it might not take more than 20 minutes every day! Swing trades usually last between a few days to a few weeks, and try to catch the larger swings in the market.

However, many of the most widely used trading indicators are incredibly basic in nature. In fact, the vast majority of trading indicators used by professionals are the ones that they learned during their first few weeks in trading.

According to us, some of the best swing trading indicators and methods are:

All these Swing trading indicators are widely recognized, and used right, they will help you to become profitable in the market!

Before we move on to the trading indicators themselves, it is important to understand what they represent. Trading indicators are not better than any other form of technical analysis, and should never be seen as the holy grail. It is not guaranteed that any trade that you make will yield profit just because a trading indicator signaled it.

Here are some other factors that can have an impact on whether you end up making a profit or taking a loss in swing trading:

Here are 4 trading indicators and some of their variants that you can use when swing trading with ease. When used properly, they should be enough to yield you a handsome return on your investment.

The moving average is one of the most basic trading indicators in swing trading. A moving average smoothens erratic short-term price movements and helps us better understand the trend and in what direction the security is moving. Moving Averages are good indicators on their own, but they are also used as a base for other, more descriptive indicators.

An SMA simply takes the mean of a set of data and then plots it on a graph. This means that all of the values carry equal weight in the calculation.

An EMA is weighted, with more recent data given a higher weighting factor. In other words, the EMA will adapt quicker to changes in price, with less lag.

In our experience, the exponential moving average tends to work best, but there are of course cases when the very opposite holds true as well. It all varies depending on the strategy and market. 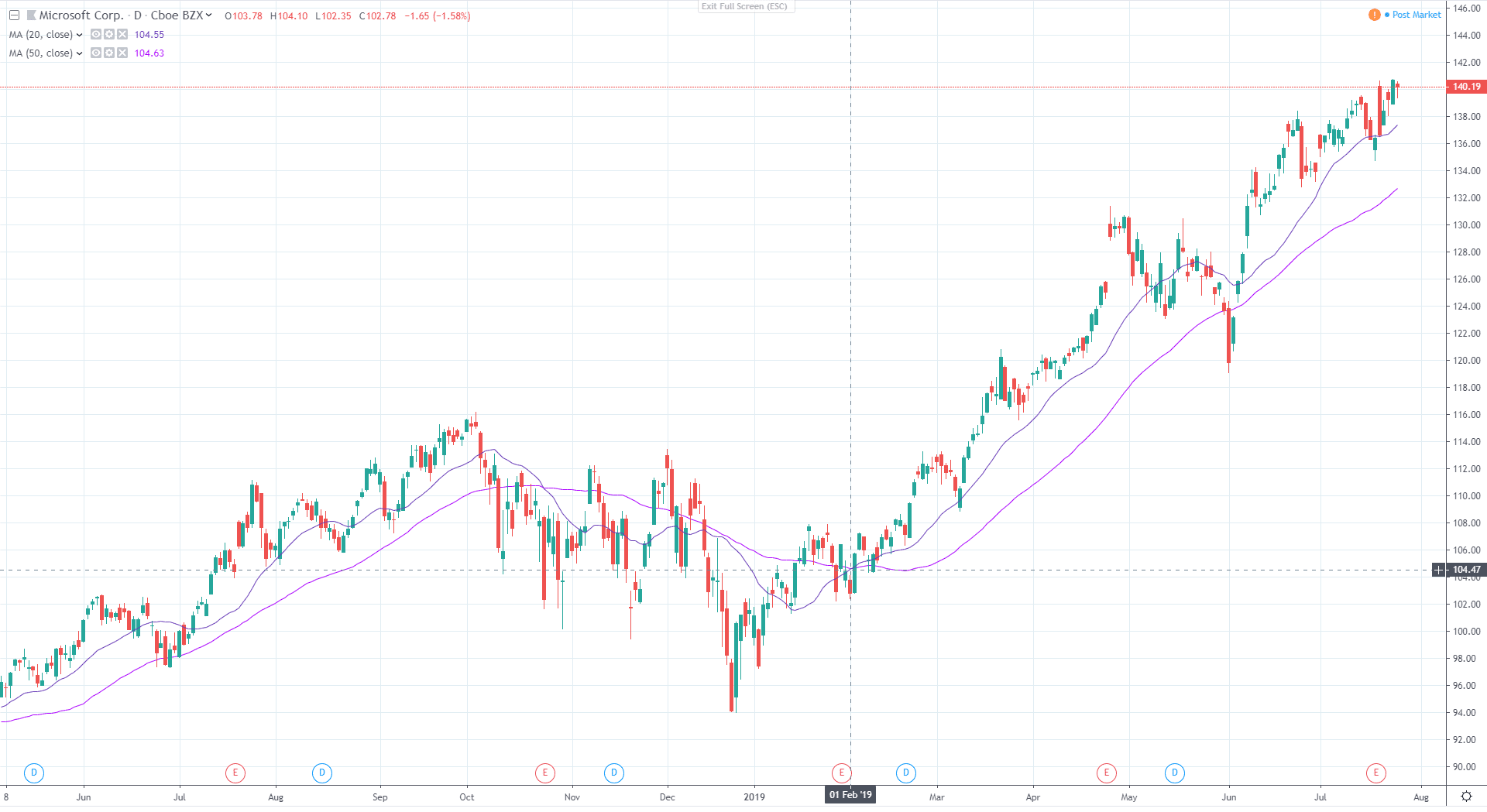 Look at Microsoft’s chart above. Near the beginning of February 2019, the short-term MA (20-days) crosses over the longer-term MA (50-days). This is a bullish crossover which indicates an uptrend. As you can see, the stock has been in a constant upward spiral since then.

Of course, the reverse is also possible. If the short-term MA crosses over the long-term MA but in the other direction, then a downtrend might be in order. You can see this in the chart prior to the beginning of the uptrend.

Although the crossover has played out its role as a complete trading system, it indeed can work as a good filter. In several of our strategies, we filter out bad trades by requiring the short term average to be over or under the long term average.

The volume can be used to determine just how strong a trend is. A rise in price with increasing volume signals a stronger market than a rise in price with decreasing volume. This is because if the volume is increasing, that means more and more people believe in the trend. Conversely, if the volume is decreasing, then the belief in the rally is not really there.

In swing trading, the volume can be used with an indicator, or as a trading indicator in itself. Let’s have a look at how you can use volume in your swing trading!

Whenever a market is on the rise, traders should be able to see strong and preferably rising volume as well. In order for the price to continue rising, there must be enough buyers that are ready to push prices higher!

In the simplest of words, a rise or fall in price with little volume is not that big a deal. However, a sharp increase or decrease in price, when coupled with a sharp increase in volume, does tend to be a big deal that can signal where the security might be heading.

Just before a trend reversal, there is usually a massive increase in volume as all the people who have been waiting to cash in on their positions move in at the same time and close their trades. This is a period of high volatility, which is then followed by a trend reversal.

Below are a few examples of volume spikes that precede a change in market direction:

One pattern that some traders use is to look for a dip occurs in a security’s price, followed by a rise and then a dip again. During the second dip, if the price does not fall as low as it did on the first dip and the volume has also shrunk, then this could be a bullish sign.

Here is an example of such a pattern. As you see, the pattern could be said to be a volume divergence. 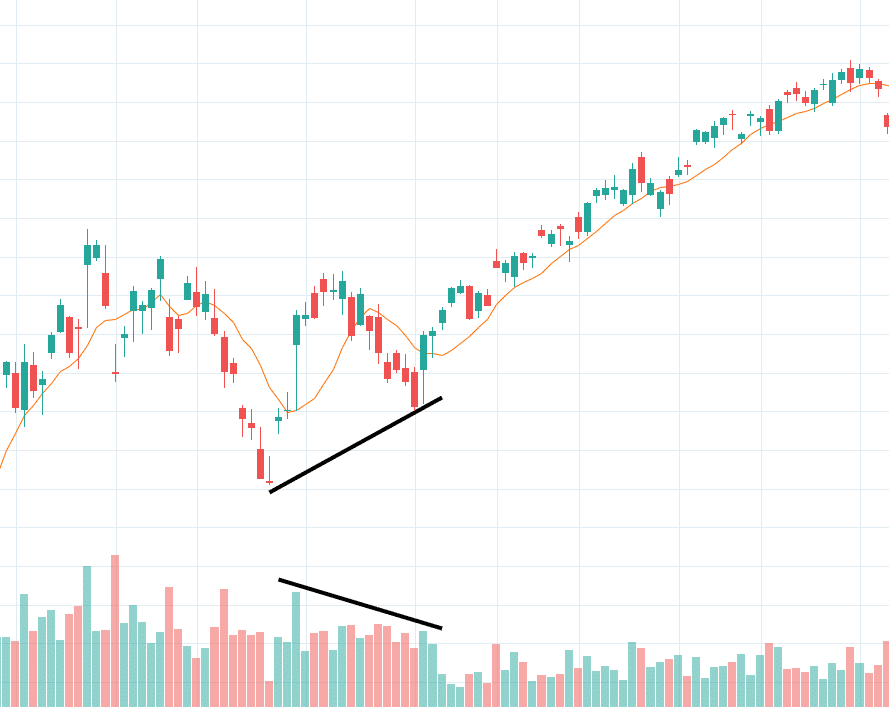 The idea behind this pattern is that the downtrend is losing momentum and strength, which is apparent from that 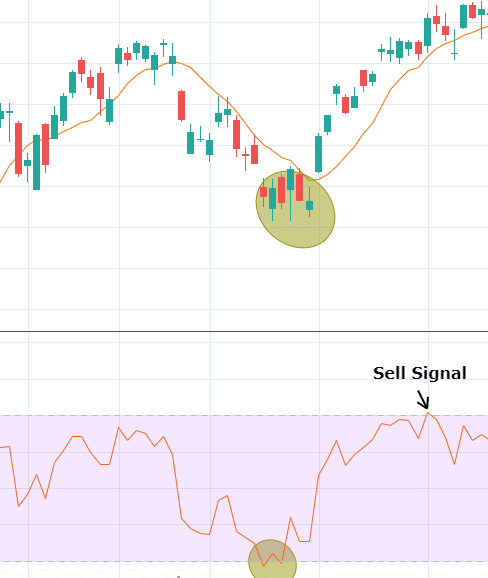 However, while most people think the RSI works best as a mean reversion indicator, from our experience it works also well as a momentum indicator!

Other Ways of Using RSI

While you can simply watch for overbought and oversold signals, there are other ways to use RSI as well.

As with  Volume that we covered before, a divergence can help to spot a potential turnaround in the market.

Spotting divergences with RSI is most reliable when the market has been trending for a long time. The divergence becomes a sign that the market is losing momentum and power, and is likely to turn around sometime soon.

Have a look at the chart below: 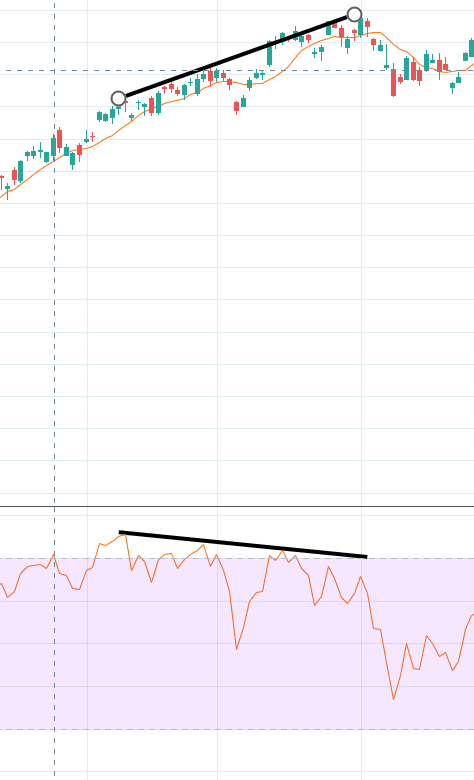 Here you see how the RSI indicator started its decline after a prolonged uptrend, while the price continued to climb. Soon, the divergence resulted in a turnaround of the trend.

The timeframe used for the RSI above is 14. This is the default timeframe that many swing traders use. However, in our experience, the best settings are found somewhere between 2-10.

The Relative Strength Index is a very versatile trading indicator that is bound to help you even after you have become an advanced trader. Studying the RSI properly and learning all of its intricacies can help you a lot.

Simply put, Support and Resistance levels are price levels that a security has troubles exceeding. When a security’s price falls far enough to reach its support level, the increasing demand makes it hard for the price to drop any further. Similarly, when the price of a security rises far enough to reach its resistance level, the increasing supply makes it impossible for the security to gain any further. 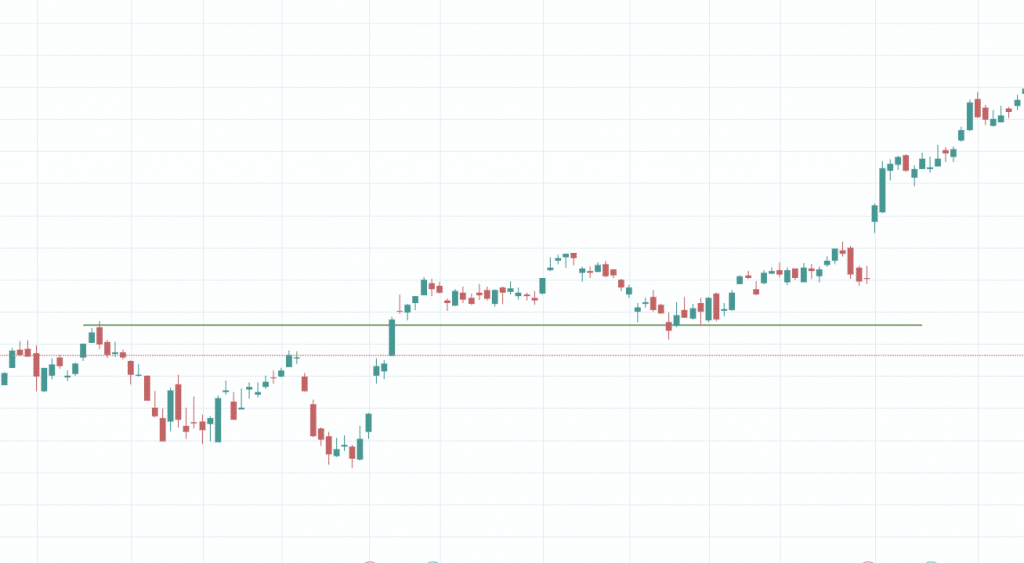 In the image you see how the price broke the resistance, which then became a support level, that price retested successfully.

Remember that both the support and the resistance levels are purely theoretical values based on technical analysis. Usually, it takes a strong rally to break through a resistance level. At this point, the old resistance level often ends up becoming the new support level, like in the image below.

In swing trading, traders can use support and resistance to determine their entry or exit from a specific trade. For example, if a security has a support level of $100, you might want to open a long position when the price is close to that point.

Nice, well-rounded numbers often end up being the support or resistance of securities. This is because many institutional, as well as individual investors, set a selling price/stop-loss around those numbers.

Using support and resistance as a trading indicator is very tricky. However, being able to determine these levels will be of immense benefit to you when swing trading. This is because you will be able to ride the trends while simultaneously having a decent idea of where the price will meet strong resistance. 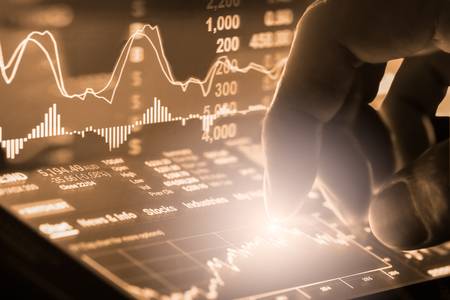 How Long You Should Hold a Trade and Position in Trading?

Is RSI a Leading Indicator?