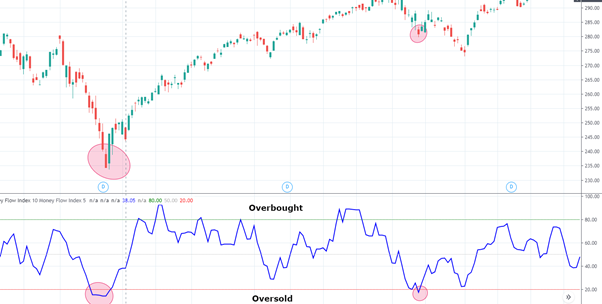 Money Flow Index Guide | How to Trade it [COMPLETE]

There are a lot of trading indicators that attempt to help traders in their quest for profitable entries and exits. One trading indicator that might not get that much attention is the money flow index.

If you have been a lot into the more popular trading indicators for a while, like the RSI and ADX, which by the way are great indicators, you might want to explore new concepts for your trading.

If that’s the case, you’ll certainly find that the money flow index provides a lot of new opportunities to discover for your own trading!

In this guide, you’ll learn.

What is the Money Flow Index? 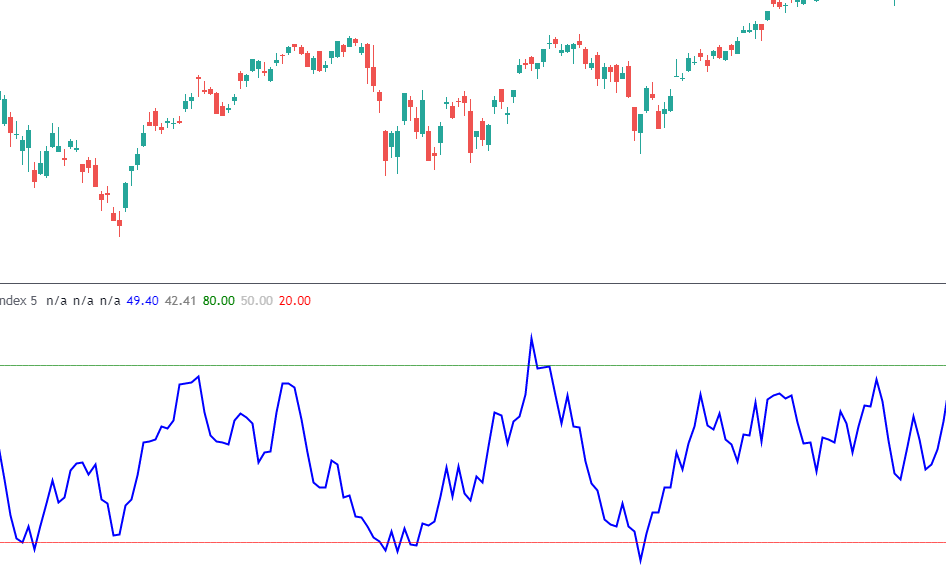 The money flow index is a momentum trading indicator that tries to define changes in buying and selling pressure. In short, it does so by comparing the positive money flow to the negative money flow, for the defined period.

Before we go into how the money flow index is constructed, it’s important to understand how money flow is calculated and what it represents in the market.

What is Money Flow?

Money flow is calculated by taking the average of the low, high and closing price of a bar, multiplied by the volume of that period. The price that we get from averaging the close, high and low of the bar is called the typical price.

So, to be as clear as possible, it’s the level of the current typical price in relation to the typical price of the previous bar that dictates whether the money flow itself is positive or negative.

Here follows an example where the money flow is negative:

How is the Money Flow Index Calculated?

The money flow index builds on the money flow calculation by accumulating positive and negative money flows for a set period, and then creating a ratio between the two.

This measure is called the money ratio.

Then, in order to get the final money flow index reading, you put the money ratio into the following calculation.

Here is a brief overview of how to calculate the money flow index:

How to Use and Trade the Money Flow Index

Having covered the very technical aspects of the money flow index, it’s now time to look at the practical applications of the indicator.

Let’s start off with how to use the money flow index to define oversold and overbought market conditions.

One of the most common applications of the money flow index is to find oversold and overbought market conditions where the price is likely to soon turn around.

In the below image you see the money flow index applied to a chart of the S&P500. We have marked two turning points as the indicator went below oversold readings.

Now, you might notice that the MFI went overbought several times throughout the period, without any significant impact on price action.

This is completely normal and expected. The reason is that we’re working with the S&P500 which has a long term bullish bias. This makes the market go past the overbought threshold many times without actually reverting.

That’s also the reason why we recommend only going long in the equity markets, at least when you’re new to the markets!

The best settings for the money flow index will, obviously, depend on the market, timeframe and strategy you’re trading. However, there are some general guidelines that may be of help to you.

Since the MFI resembles the RSI indicator to a large extent, you will find that much of the concepts that work with the RSI ware applicable to the money flow index as well. And this also extends to the best settings.

In our experience you should definitely look at using a shorter setting than the default 14 periods. We’ve found that lowering the period setting to around 2 to 6 tends to catch the swings in the market quite nicely.

In fact, there even is a common trading strategy that successfully manages to enter and exit trades, using nothing but the RSI with a two-period setting. And since, again, the RSI and money flow index are quite similar, that’s an approach that should work well with both indicators.

Now, while the overbought threshold is often set at 80, and the oversold at 20, you should definitely try to play around with these settings. This especially applies if you do any of the following.

1. Change the period of the MFI

When the market is in a strong trend, either bullish or bearish, you might have to look into adjusting the threshold values.

For example, a very bullish market is likely to produce money flow index readings in the upper half of the indicator range, with most price reversals occurring when the indicator is far above 20. Thus, you will have to move the oversold threshold higher, in order to not miss out on too many signals oversold signals.

Conversely, if you’re trading a market that’s in a strong bearish trend, you might have adjust the threshold values down a bit, to account for the bearish sentiment.

Another common way to use the money flow index is to look for divergences between market tops or bottoms and the MFI reading itself. A divergence between the two would suggest that the current market trend is approaching its end and soon will change direction.

In general, we usually divide divergences into bullish and bearish divergences.

A bullish divergence is when the market produces new lower lows, while the MFI produces higher lows. This tells us that the bullish momentum is fading and that a trend reversal might come soon. 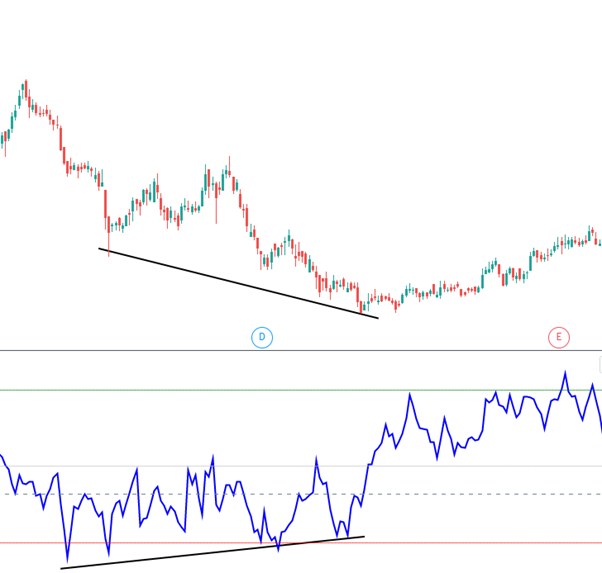 Conversely, a bearish divergence appears at the end of a bearish trend, when the market produces two lower highs, as the MFI makes a lower high. 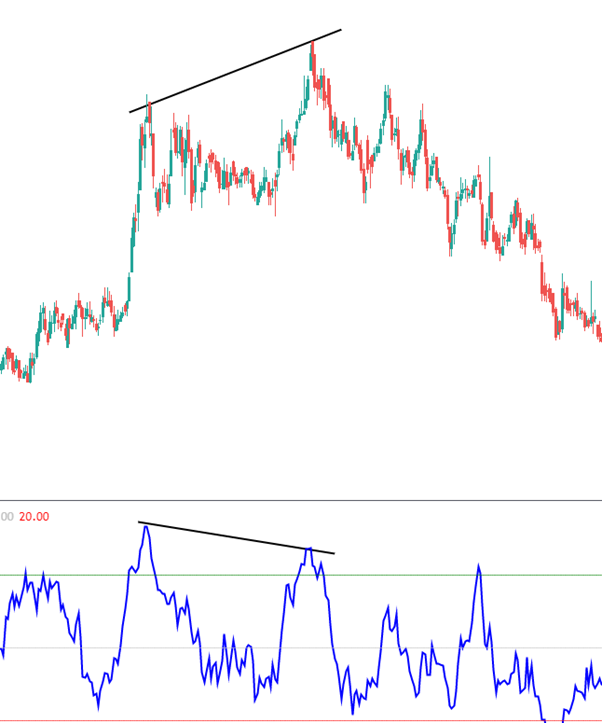 Divergences don’t signal an exact point in time when the market is likely to turn around but should be used in combination with other tools to better time your exits. In that sense, divergences just show that the overall market structure may be favorable for a reversal, but leave the exact timing to be determined by other methods.

Another popular approach is to look for something that’s called a failure swing. These usually signal that the market is about to turn around from oversold or overbought market conditions!

A bullish failure swing involves an oversold indicator reading, and a breakout above a previous high in the money flow indicator.

Here are the four criteria that need to be met:

Here is an image showing a bullish failure swing: 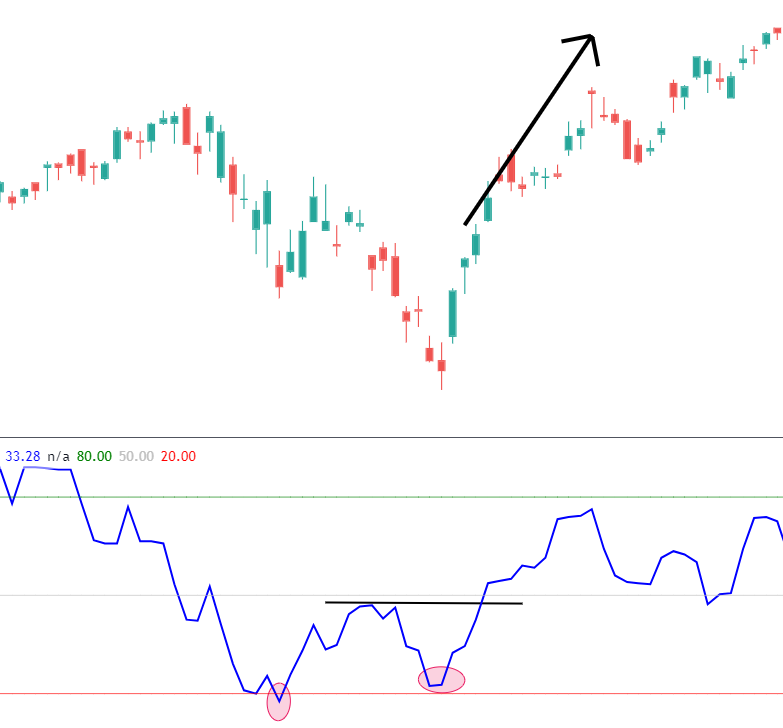 As you see, the money flow index first dipped below 20, recovered, and then turned around without crossing the 20-line. We then waited for a breakout above the black line as our long entry signal.

If you look carefully, you also see that we had a bullish divergence, which added to our bullish view on the market.

The bearish failure swing is the opposite version of the bullish failure swing. Thus, we’re looking at a market that’s overbought and likely to soon head down. Here are the four criteria of the pattern:

Here you see a real example, to make a little clearer. 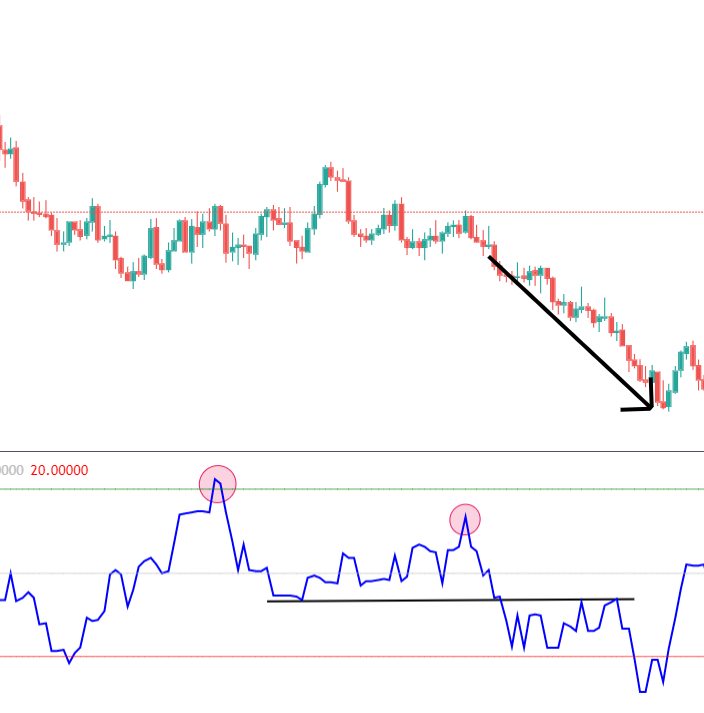 The money flow index first goes above 80, which signals that the market is getting overbought. Shortly thereafter, it makes a new swing low, retraces up towards 80, and then breaks the swing low which becomes our signal to go short. 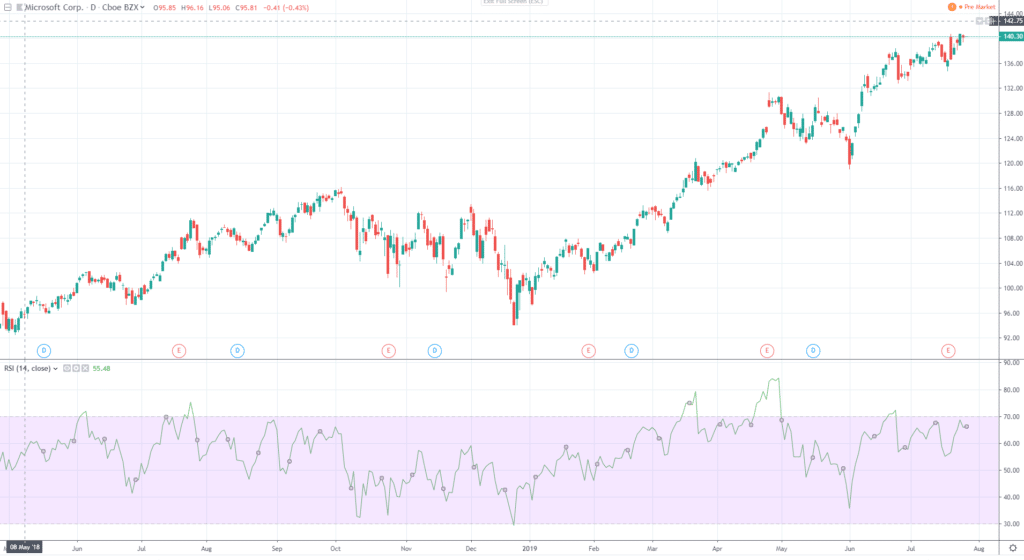 The money flow index and RSI do seem very similar to each other when plotted on a chart, and that’s not for no reason. In fact, the MFI could rightfully be said to be a volume-weighted adaptation of the RSI.

Both indicators use a 14-period lookback-period as their default setting, and oscillate between 0-100. They also have very similar oversold and overbought thresholds.

However, while RSI only tracks market momentum as in the speed and change of price movements, the money flow index relies heavily on the market volume and its direction to come up with its reading.

Uses of MFI VS Uses of RSI

The money flow index is usually used more to spot divergences in the market. This is because the inclusion of volume means that a divergence in the MFI not only appears as a result of changes in market momentum, but also the trend strength in terms of buying and selling pressure. This means that we may take a divergence more seriously if it occurs in the MFI.

On the other hand, the RSI indicator is by many thought of as the better choice when it comes to spotting oversold and overbought conditions.

Now, many traders who choose between the two, simply use both to confirm one another and get a stronger signal. For instance, they may decide to only go long if the MFI and RSI are below 20.

In our definitive guide to RSI, we cover the RSI indicator in greater depth, and have a closer look at how you can use to it find profitable trading setups.

The Money Flow Index is an oscillating trading indicator that uses volume and price action together, to come up with a value between 0 and 100. This value is then used to determine whether the market is oversold or overbought, or to find patterns such as divergences or failure swings that tell us where the market is likely to head next.