A matching low is a bullish two candle reversal pattern that forms in an ongoing downtrend. As to its appearance, a matching low consists of two candlesticks that are negative, but that close at or around the same price.

In this guide to the matching low, we’ll cover how to identify the pattern, its traditional meaning, and show you some methods that you can use to improve the accuracy of a matching low. In addition to this, we’ll also show you a couple of trading strategies that use the pattern!

How to Identify a Matching Low

These are the conditions that need to be met for a matching low to form:

The general belief is that once a matching low has been formed, the trend is likely to revert from bearish to bullish.

What Does a Matching Low Tell Us About the Market?

Candlestick patterns tell us a lot about the markets and how they have moved. Being representations of market prices, they show how market sentiment and psychology formed the price movements we witness. As such, we may use candlestick patterns to understand what happened in the market as the pattern formed.

Quite obviously, it’s very hard if not impossible to know the exact reasons why a market moved as it did, but we still could come a long way studying candlestick patterns. And if you watch the market for long enough, you will soon start to see recurrent patterns, that perhaps could be turned into trading strategies!

So let’s see what might have happened as the market formed a matching low!

Coming from a bearish environment, the market sentiment is mostly negative, and market participants expect prices to continue to plummet. As the first bar of the matching low pattern forms, this holds true. The market performs a big bearish candle as a result of the heavy selling pressure.

However, since the market has gone down for a while already, some market participants begin to sense that it’s becoming oversold. As such, an increasing number of market participants choose to let go of their short positions and bring home profits. As the next bar open, this results in a wave of buying pressure as people cover their positions, which makes the market gap up. Still remaining fairly bearish, it doesn’t take long for the market to head down again.

As the day comes to an end, shorters haven’t been able to push the price below the previous close.

Some market players take this as a sign of market strength, and when factoring in the positive gap, they decide to get out of their short positions. Soon more follow their example, which increases buying pressure and makes the market turn around and start a new uptrend.

Below are two real-world examples of the matching low pattern: 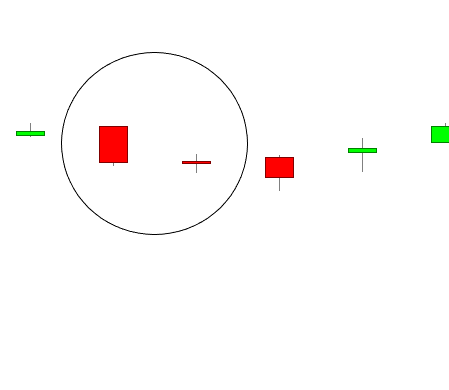 How to Trade the Matching low: How to Improve the Pattern for Live Trading

The matching low pattern is believed to signal that a reversion of the trend is coming, and many new traders would use it as is. However, most traders who have been in the game for a longer time, wouldn’t take a pattern like the matching low without some sort of confirmation. And we fully agree!

To make the matching low a worthwhile pattern, you will have to add additional conditions or filters to ensure that you only enter a trade when it’s favorable to you!

In this section of the article, we’ll share some of the filters that we use in our own trading strategies to remove the bad trades. However, just remember that what works is greatly dependent on the timeframe and market you trade. We recommend that you use backtesting to find out where your strategy works best!

Watching the volume of a market is a great way to see the forces behind a move. Even if you see a big move in the price chart, you’ll have a hard time knowing the conviction with which the market carried out that move. With volume, we get a better sense of the force behind the moves we see

Generally, higher volume is believed to be a sign that the pattern we observe is more significant. However, our own research shows that the very opposite could hold true as well, and that it really depends on the market you’re testing on as well as the characteristics of the pattern itself.

Now, these are some of the filters that we like to use ourselves when it comes to volume filters:

Be sure to test what works best with your market and timeframe!

The volatility levels of a market could have a great impact on the performance of any strategies. You will find that some strategies work better in low volatility environments, while others instead work better with high volatility.

One of our favorite ways of implementing volatility in trading strategies, is with the ADX indicator. ADX and volatility is one of those concepts that work very well on nearly all markets, and that is hard to curve fit.

According to the traditional interpretation of ADX, a market is considered volatile if the ADX is above 20, and calm if it’s below 15.

While the default setting for the length of the ADX indicator is 14, we’ve found that you can produce better results by tweaking it a little bit. For example, we’ve found that settings from 5-30 could work very well, so there is no reason at all to stick with the standard settings!

Again, to find out which settings work best with your market, you should preferably use backtesting.

As such, you might want to include seasonality in your analysis of the markets, to improve your odds of success. For example, if you know that a market tends to be more bearish during the second part of the month, it might be unwise to act on a matching low pattern that appears in the middle of the month, since seasonality works against you.

Here are the types of things we use to look for when filtering out bad trades from our trading strategies:

The best way to test for tendencies like these, again, is with backtesting!

Now that we have covered some effective filters to improve the matching low pattern, it’s time to move on to some trading strategies!

Just remember that these strategies aren’t ready to trade. They are provided to show how we would start to experiment with the matching low in order to find something that’s worth our time.

Still, just as with the filters in the previous section, what we show you are things that we have seen work in our own trading strategies!

As you probably remember, the second bar of the matching low starts by gapping up, before it falls down and closes around the open price of the previous bar. As such, the gap itself is an important part of the pattern, which means that its size could have an impact on the accuracy of the signal.

Following this, we might want to require that the second candle gaps above the midpoint of the previous candle, since it would signal that the bulls managed to move the market quite a bit!

As such, the conditions for the strategy become that we buy if:

The market may very well continue down after a matching low pattern. In fact, some traders would say that it’s more of a continuation pattern than a reversal pattern.

As such we will try to impose a condition that makes sure that the market is going in the right direction.

More specifically, we’ll demand that the market closes above the high of the pattern, before we enter.

So the rules become that we enter if:

We then exit the position after 5 bars.

As you’ve learned in this guide, a matching low is a candlestick pattern that signals a positive reversal of the trend, but cannot be traded as is. You need to apply additional filters and conditions to remove a lot of the bad trades, in order to remain profitable.

Before we end the article, there is one final tip we want to give, you, and that’s to NOT TRADE THINGS YOU HAVEN’T TESTED. Markets are mostly random, and most of the patterns and technical analysis SIMPLY DOESN’T WORK. As such, it’s imperative that you do your own research