Interestingly, the marubozu candlestick pattern is one of the most common patterns, and I bet you must have heard of it but probably don’t know how to use it in your trading.

Many traders prefer the Japanese candlestick chart because it presents the individual price bars in shapes and patterns that can easily be identified. Those shapes and patterns, commonly referred to as candlestick patterns, often tell a story about the market condition, which is why they are one of the most reliable trading tools used by price action traders.

Don’t worry; we are about to fill that gap for you in this post. Here are what you will learn from the article:

What is the Marubozu candlestick pattern?

The Marubozu candle pattern is a single-candle pattern. It is a straightforward formation that is easy to spot. In simple terms, the marubozu candlestick pattern can be described as a long candlestick when compared to other candlesticks around it. Its upper or lower shadow’s length relative to the body is very small — in fact, a perfect marubozu has no shadows, but that is not very common.

The term marubozu means “bald head” or “shaved head” in Japanese, which implies that there are no or minimal wicks (or shadows) on the candlestick. The absence of wicks or shadow on the candlestick means that the opening and closing prices are around the same level as the high or low price for the trading session. That is, the trading session opened at a high price and closed at a low price at the end of the day, in which case the pattern is said to be bearish, or it opened at the low price and closed at the high price, which makes the pattern a bullish candlestick.

However, it is rare to find a marubozu candlestick without at least a little shadow at one end. So, what it takes for a pattern to be classified as a marubozu candlestick formation is for, at least, one of the open or close to be flat. In the perfect marubozu, both the open and close are flat, as the market opens the session and starts rallying in a certain direction and finally closes at the exact end. Thus, open and close are at the same price as are the high and low or low and high, as the case may be.

The marubozu candlestick pattern can provide analytical insight into the future direction of the price of an asset. However, while most traders have heard of the marubozu pattern, they don’t often recognize that this unique candlestick is worth much more attention. Many traders simply see it as the opposite of the doji but do not dive deeper to learn how to use it in trading. If only they know that this candlestick can tell them so many things about a price trend, including the emergence of a new trend via a breakout, how healthy a trend is, when to expect a pullback, and when a pullback is likely to end.

As you can see, the marubozu candlestick is not only common but also very useful in price action analysis and trading. If you understand its implication in any price movement, you can definitely use the knowledge to improve your trading. But first, do you know how to identify it?

How to identify the marubozu candlestick

Typically, the features of a perfect marubozu are as follows:

In actual market conditions, a perfect marubozu rarely occurs. So, there may be a little shadow on either end of the candlestick due to there is a minor difference — usually a very small percentage of the candle range — between the open or close price and the high or low price. While this is usually neglected when identifying a marubozu, for a pattern to be classified as a marubozu candlestick formation, at least one of the open or close has to be flat.

In a perfect marubozu, both the upper and lower ends are flat, showing that the session opened and moved in one direction and closed at the exact level it got to, so the open and close are at the same price as are the high and low. See the picture below: 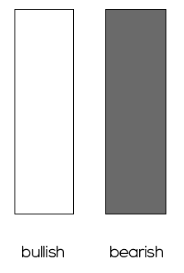 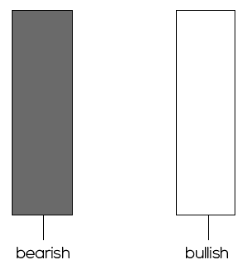 The psychology behind the marubozu pattern

The marubozu is a single candlestick pattern that can give insight into the sentiments of the market at a given time. As with all candlesticks, the marubozu pattern can be found on any candlestick price chart and all timeframes and shows how the market traded in that trading session.

Usually, buyers and sellers are always battling for who will dominate the market. In some trading sessions, one side wins by far, leading to the formation of the marubozu candlestick pattern. Depending on who controlled the day, the pattern can either be bullish or bearish. A bullish marubozu pattern indicates that buyers dominated the trading session, while a bearish marubozu indicates that sellers dominated proceedings during the session.

Basically, the marubozu candlestick pattern indicates that the market traded to the close without any lasting retracement — it opens at one end and closes at the opposite end. So, the pattern shows the urgency of market players. It represents constant trading by traders who are determined to push the price in one direction.

The psychology of the pattern is that when the market shows urgency in a direction, it prompts strong expectations — for instance, when you see a bullish marubozu, you may expect prices to continue rising in the short term. But the market may not follow through as you expected.

In fact, in many cases, the market doesn’t follow through after the formation of a marubozu candlestick because the traders pushing the price in that direction may experience exhaustion or there may be profit-taking after such a big move in one direction. Depending on the price trend and swing where the pattern forms, it might actually be a sign of a buying or selling climax.

A buying climax occurs in an upswing of an up-trending market, and it is usually marked by a tall bullish marubozu candlestick. It shows that traders are enthusiastically buying and pushing the price up. Even those on the sidelines might join out of fear of missing out (FOMO). This buying frenzy usually ends with a tall candlestick that closes around the high of the trading session. What follows is exhaustion and profit-taking, leading to a decline that may either be a pullback or a complete reversal.

The opposite happens in a selling climax, also known as capitulation, which occurs in a downswing of a down-trending market, and it’s usually marked by a tall bearish marubozu candlestick. It shows that traders are enthusiastically selling and pushing the price down. Even previous buyers who had been on the sidelines might throw in the towel and start selling out of fear of losing everything. This selling frenzy usually ends with a tall candlestick that closes around the low of the trading session — a situation referred to as capitulation. What follows is the smart money coming in to buy the asset en masse now that it is cheap, leading to a price rally that may either be a pullback or a complete reversal.

The marubozu pattern may also indicate an emerging trend, especially if it occurs at the beginning of a price swing and leads to a breakout of a support or resistance level. In this case, it may occur as a part of the three white soldiers or three black crow patterns. On the other hand, the marubozu pattern may also form in a pullback against the prevailing price direction.

How to use the marubozu candlestick pattern in your trading

Step 1: Analyze the state of the market

Here, you check for the prevailing trend and note its direction and strength. This is a very essential step in trading the marubozu pattern because it allows you to understand what the market is up to.

Since the marubozu is a single bar candlestick pattern, it forms in isolation, so getting a firm grasp of the context becomes much more critical.

After understanding the state of the market, you look out for the marubozu pattern. As we stated earlier, the perfect marubozu pattern without any shadow is rare, so look for other types too. A candlestick with a shadow on one side that is not more than 5% of the entire candle range. To put it differently, look for a tall candlestick with a body that constitutes at least 95% of the entire range.

But the most important thing is not the pattern on its own but what it says about the sentiment of the market.

Related articles: How Do You Trade the Vix Index?

Step 3: Analyze the marubozu candle pattern in the context of the market

So, the key is to understand the context in which the pattern forms — along the impulse swing or in a pullback. Then, focus on the market’s reaction to the pattern. For instance, in an uptrend, you expect a bullish marubozu in the impulse swing to enjoy follow-through and a bearish one to fail. The reverse is the case in a downtrend.

If the reaction to a marubozu fails to meet your expectation, you use that failure to update your outlook. If a bullish marubozu in an uptrend is not followed up with bullish candles, it could be that the buyers are exhausted, and in that case, a pullback or a full reversal is possible. On the other hand, if you see a bearish marubozu in a pullback of an uptrend and there’s no follow-through, watch out for a reversal of the down move and the continuation of the uptrend.

Step 4: Identify the most likely setup

After getting the sentiment in the market, look out for other factors that make for a high-probability setup. A common one is a support/resistance level. Check if the price is bouncing off the level or breaking it. That will determine the direction you trade.

In the chart above, you can see that the market is in an uptrend, as indicated by the up-sloping moving average line. Note the support levels too. From left to right, you can see the first failed bearish marubozu in a pullback. Notice that the price bounced off a support level and reversed to continue the uptrend. Then there’s a failed bullish marubozu that kick-started another deep pullback. When the pullback got to a support level, another bearish marubozu pattern formed, and it failed, with the price bouncing off to continue the uptrend.

What are the pros and cons of using the marubozu candlestick pattern?

As with every price action pattern, there are some pros and cons of trading the marubozu pattern. The pros include the following:

Here are some of the cons: