The double seven strategy is one of the strategy revealed by Larry Connors and Cesar Alvarez in their book Short Term Trading Strategies That Work. This simple system worked very well on a wide range of ETFs around the time the book was published in 2010. So, it would be interesting to know how it has performed in the last decade since its publication. Here, we will examine the performance of the double seven trading strategy over the last twenty-one years on a wide range of liquid ETFs.

What is the double seven trading strategy?

The criteria for the Larry Connors double seven strategy are as follows:

This is a mean-reversion strategy, which buys on dips and sells on strengths, and it uses no stops.

The strategy is likely to work well on most stocks and stock indices but may be less efficient on other instruments.

See an example of a trade in the S&P 500 Index chart below:

As you can see, the S&P 500 (the ETF SPY) takes a hit, and the system goes long on the close. Then. nine days later, it exists with a significant profit.

The results of the double seven strategy

The backtesting was done from the year 2000 (or from the inception of the ETFs). Note that the last five ETFs were not included in Connors’ original tests:

Backtesting the strategy on the S&P 500 Index ETF (SPY), the ETF with the longest history, showed that the double seven strategy triggered 154 trades with an average gain of 1.18% and a win ratio of 82.5% since the inception of the ETF in 1993.

However, the high win ratio is hampered by the fact that the losers are bigger than the winners: 2.99% against 2.06%. Nonetheless, the profit factor is a solid 2.58 and the Sharpe Ratio is 1.4. Moreover, even the maximum drawdown of 33% is much lower than that of the buy-and-hold method, which is 55%.

The total time spent in the market is about 26% (exposure), and as a result of low exposure, the CAGR is 6.3% compared to 10.1% for buy and hold (with dividends reinvested).

Here is the equity chart of this backtesting on SPY (logarithmic chart):

How the double seven strategy performs with a portfolio

We also tested the double seven strategy on all the above-mentioned ETFs as one portfolio. By allocating 20% of the equity to each position, we have a maximum of five positions at any time. The results of our backtesting were as follows: 1189 trades with an average gain of 0.63% per trade (excluding slippage and commissions). 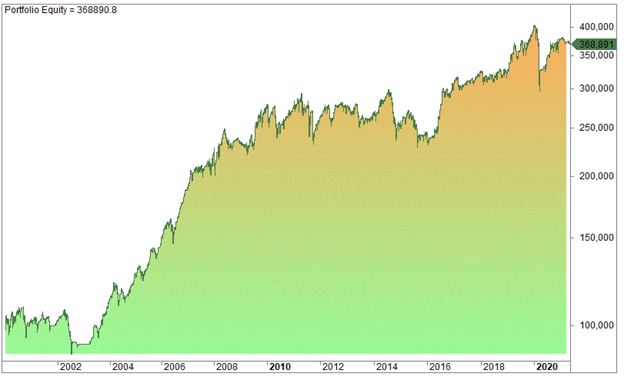 Although the CAGR is modest at 6.3%, almost all gains happened before 2010. Thus, we think it’s naive to use a “universal” strategy and expect it to work on many financial instruments.

But if we are to find out how the double seven strategy performs as a portfolio including just the SPY and the QQQ, will the strategy work? Well, we found that on a “portfolio” consisting of only SPY and QQQ, the strategy doesn’t work since there are too many overlapping trades, as you can infer from the equity chart below: 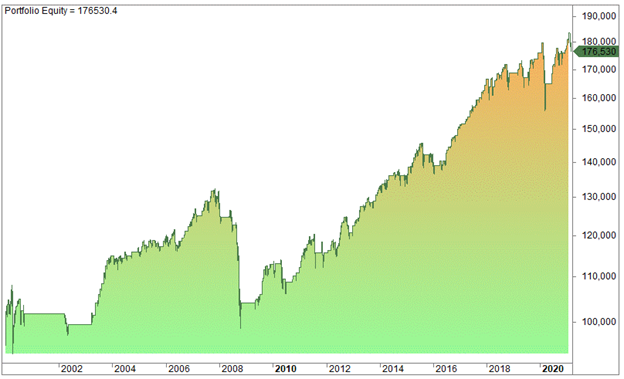 Any way to optimize the double seven strategy?

While we don’t know why Connors and Alvarez used only the seven days rule, we found that, on the S&P 500, the strategy performs reasonably well on any day from 2 to 15 days.

It appears that the double seven trading strategy still performs well on the main stock indices. And, it may be possible to tweak it to perform even better. Being a mean-reversion strategy, you can only use it for short-term swing trading.