Candlestick patterns have become one of the most widely used branches of technical analysis today. With their colorful bodies and long wicks, they make price action easy to read, and accessible to more traders. One common candlestick pattern is the bearish one black crow.

The bearish black crow is a bearish reversal candlestick pattern that appears in a bullish trend. It signals that the current bullish trend has come to an end, and soon will be followed by a negative trend.

In this guide to the bearish one black crow, you’re going to learn everything you need to know about the pattern. We will have a look at its meaning, definition, and some ways that you can improve the pattern.
Let’s start! 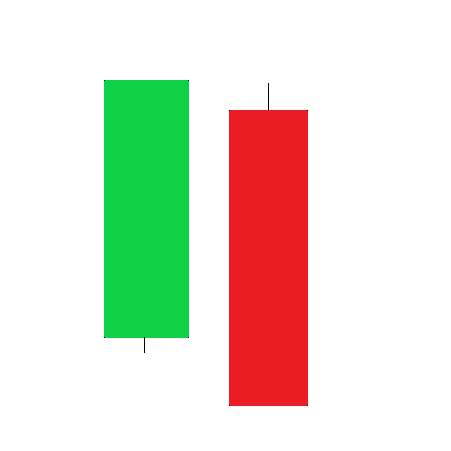 The bearish one black crow is a bearish reversal pattern that consists of two candles. The first one is bullish, while the second is bearish.

Here follows the exact definition of the pattern:

What Does a One Black Crow Tell Us About the Market?

All candlesticks tell us unique stories about the market forces that prevailed. And as traders, we may be very interested in getting an idea about what made a certain pattern form.

So, let’s have a look at what the bearish one black crow tells us about the market.

When the first positive candle forms, the market is in a positive trend, meaning that market sentiment is mostly positive. Market players believe that prices are going to continue rising, and subsequently decide to be long the market.

However, having gone up for quite some time already, buyers start to worry that the bullish trend is approaching its end.

As such, some decide to get out of their long positions, which leads to a flood of sell orders hitting the market. As a result, the market gaps down and opens below the open of the previous candle.

Upon noting the gap, more people start to fear the same thing and add to the selling pressure, which makes the market head even lower.

As the open of the previous bar, which is a significant resistance level, doesn’t hold, more market participants start to realize that there isn’t enough strength in the market to fuel a continuation of the trend. Again, this adds to the selling pressure and makes it more probable that the bearish trend is here to stay.

Way to improve the Bearish One Black Crow

In this part of the article, we wanted to share some of our favorite ways of filtering out bad trades, that we’ve had a lot of success with in the past.

Just remember that what works will vary a lot depending on the market and timeframe you choose. Thus, we recommend that you always backtest anything before going live, to ensure that it works for you.

Having said this, let’s start!

Something that a lot of traders tend to overlook, is seasonality. That’s a shame, considering that it holds so much potential!

In short, you could say that seasonality means that markets are more prone to being bullish or bearish at certain times, on a recurring basis. For instance, some markets tend to perform better in certain months of the year.

However, we like to employ seasonal tendencies on weekdays, where we’d had a lot of success. For example, many markets tend to have some days where they’re more bullish or bearish. And if you know of these tendencies in advance, you could use it to time your entries better!

With reversal patterns like the bearish one crow, the amount that a market has moved up before forming the pattern may be of great importance. There simply needs to exist a trend to start with, before we can start to look for reversal signs.

One special technique that you may use for this, is to look at the distance of the close to the 200-period moving average. If the distance is long, then that’s a sign that the market is in a strong trend that’s in theory more likely to turn around soon.

Having covered two methods to improve the pattern, we’ll now look at how you could create a trading strategy out of the pattern.

Just keep in mind that the strategy below needs to be used on the right market and timeframe to work. Regardless, it should provide great inspiration for you to continue building on!

Bearish One Black Crow With ADX

In this strategy, we’ll use the ADX indicator, which has served us well over the years, to know when the market is in a strong trend that’s more likely to revert soon. If you aren’t familiar with the indicator, you may have a look at our complete guide to ADX where we cover everything you need to know! 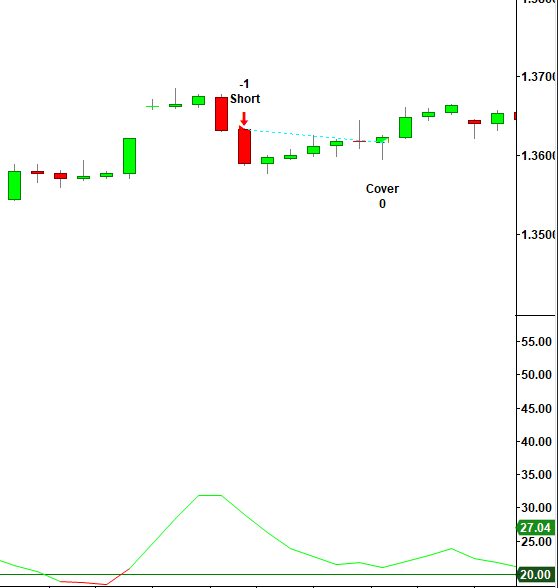 In this guide, we’ve had a look at the bearish one black crow pattern, and how it’s traditionally interpreted. In addition to this, we’ve looked closer at how you may go about to improve the performance of the pattern, and make it work for you and your market.

Just remember that you always should strive to validate your ideas and patterns through backtesting, BEFORE putting money at risk. For those who are interested in learning more about this, our article on backtesting, or our complete guide to building a trading strategy is the perfect resource!