What Does DD Mean In Stocks?

As a player in the financial markets, you must have come across the acronym, DD. But do you know what it actually means, especially when it comes to stock trading?

The acronym DD can mean different things to stock traders and investors. It can mean Due Diligence, which refers to an investigation of a stock to confirm all facts before investing, but it can also mean Draw Down, which refers to a decline in a trader’s trading capital. Among certain traders, especially crypto traders, DD could mean Double Down, as in double down on a dip. So, the meaning of DD in trading depends on the context in which it is used.

In this post, we’ll discuss the 3 possible meanings we highlighted above, which are as follows:

In stock trading, due diligence refers to the idea of analyzing a stock before deciding to buy so as to mitigate risk. Basically, it means researching a stock before you buy so you don’t buy out of FOMO or because it has a cool name.

It is not just about looking at the stock chart; due diligence involves reading earnings reports and examining a company’s numbers, comparing the numbers over time, and benchmarking them against competitors. It means looking at financial records, past company performance, revenue, costs, analyzing PE against future growth, and other things that contribute to the company’s business success.

In trading/investing, a drawdown (DD) refers to how much an investment or trading account is down from the peak before it recovers back to the peak. Drawdowns are a measure of downside volatility. Most traders measure drawdowns as a percentage of their account capital, but some also measure them in dollar terms.

To understand the concept of an account drawdown, let’s look at this example: Assuming a trader has a $10,000 account and loses $5,000, their account drawdown would be 50%. That is, they have lost 50% of their account capital. So, a drawdown is the reduction of one’s capital after a series of losing trades. The drawdown is normally calculated by getting the difference between a relative peak in capital minus a relative trough. See the chart below: 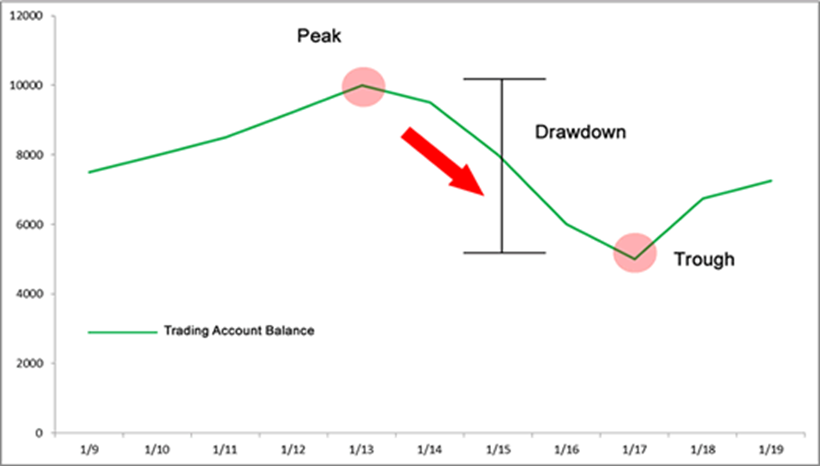 You may also see words like maximum drawdown: this is a specific measure of drawdown that looks for the greatest movement from a high point to the lowest point before a new peak is achieved. Note that the maximum drawdown only measures the size of the largest loss, without taking into consideration the frequency of large losses.

Since it measures only the largest drawdown, you cannot use MDD to know how long it took an investor to recover from the loss, or if the investment even recovered at all. The maximum drawdown (MDD) is an indicator used to assess the relative riskiness of one stock screening strategy over another. It focuses on capital preservation, which is a key concern for most investors.

In trading, the term double down refers to a trading strategy where the trader adds to a losing trade with the hope that the market would later reverse and make them money. It is different from dollar-cost averaging in that it only adds to a losing position — the trader is doubling down on a dip and not on a winning position.

An example of a double-down strategy is a scenario where a trader buys a stock at $50 per share, and the stock price drops to say $40 per share. Instead of getting out of the trade or simply holding on to the position until the price reverses, the trader buys more shares of the stock at $40 per share, hoping that the stock would eventually reverse and they would make more profits.