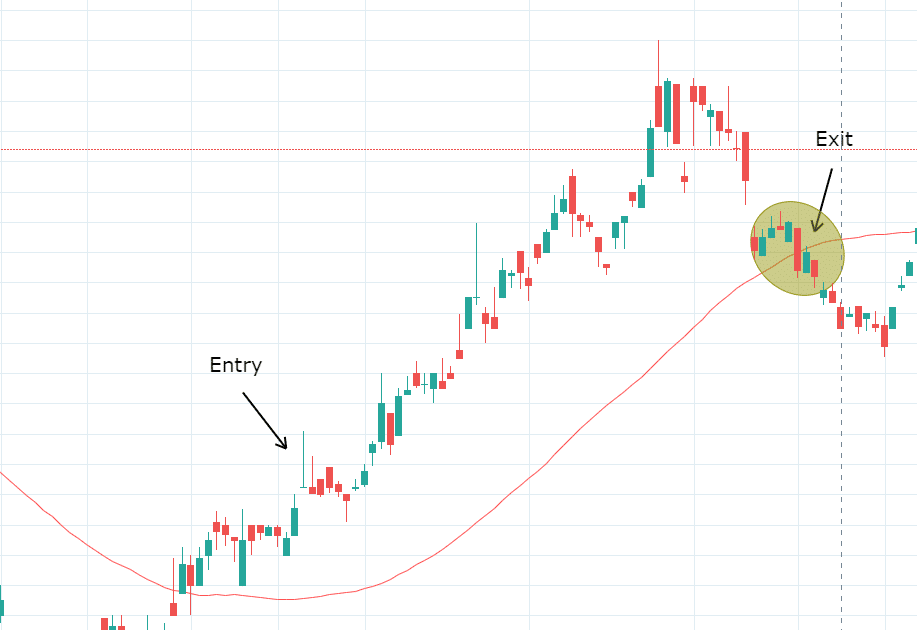 Understanding a trailing stop loss can be difficult if you are new to the markets. For beginner traders who are already struggling with various different order types, the two types of trailing stop losses can be a hassle to maneuver.

How a Trailing Stop Loss Works

Trailing stop losses move along with the price of a security. Simply put, there is no fixed price for a trailing stop loss, but the stop loss level readjusts itself continuously with the rising market.

There are many ways you can calculate the trailing stop loss. One way is to simply set the stop at a certain distance from the highest high, or lowest low if you are going short. In that way, the stop level is continuously increased as the market moves, thus becoming a trailing stop.

People often call trailing stop loss orders profit protecting stops. This is because they will move along with the security as long as the price action is favorable to your trade. However, they will come into effect as soon as the trend reverts.

This is also the reason why trailing stops are used mostly with trend following strategies. With a stop loss level that rises or falls with the trend, you are in for the long trends, while the trade is exited as soon as there is a reversal of the trend.

Suppose you purchase 1,000 shares of a security at $50 and set a trailing stop loss 50 cents below the maximum price ($50 at time of purchase). If the price keeps on falling and hits $49.50, the trailing stop will trigger and an order will be made on your behalf to sell your 1,000 shares at market value.

Now that we have covered what a trailing stop loss is, we will have a quick look at the two different order types you can use when the market hits the stop loss level.

The stop order is an order type that immediately sends a market order when the market hits the set stop loss level. Since a market order has no conditions as to what price it may be executed at, it is typically filled immediately.

If you use a stop-limit order, once the stop level is reached, a limit order will be sent out. A limit order is an order that will only be filled at the limit price or better.

Thus, if you are long in a trade and your stop level is reached, the trade will only be exited at the limit price or higher

Conversely, if you are short in a trade and the stop level is reached, you will only get out of the trade at the limit price or lower.

So for the stop limit order, there are two levels you need to keep track of:

Stop Level: This is the level where the limit order is sent out.

Limit Level: Once the stop level is hit, a limit order with the instruction to buy at the limit price is executed.

In other words, the major difference between a stop limit order and a stop order is that the latter does not place a market order when your stop level is triggered. Instead, you set a limit price, and the security will only be sold if your broker is able to find a buyer/seller at the price you have stated or better.

Here is further reading that might be of interest.

Once again, let’s assume that the price of the security goes to $52 before falling back to $51.50 which triggers the stop loss. Your broker will now automatically generate a limit order to sell the security. Instead of selling it at the market price, the order will now state that the security can be sold as long as the broker can find a buyer for the security at or above $51.30 (20 cent limit).

From the examples above, it may seem like a trailing stop limit is the obvious choice due to its greater flexibility However, do remember that although limit orders allow you to have a lot more control over your trades, they also carry additional risks.

A perfect example of this would be that if a security is in a free-fall, then the entirety of your order may not be executed. In the aforementioned example, suppose the price of the security kept falling and your broker was only able to sell 700 of your shares before the price fell below $51.30, which is below the limit level. In this case, your order will not be filled until the price of the security once again rises to $51.30 and your broker is able to find willing buyers.

Market orders, on the other hand, have a much larger chance of going through. Of course, there is the risk that you will not be able to find buyers at a suitable price and experience a loss that is larger than your expectations. However, if you trade liquid markets this very seldom becomes an issue.

Which is the Winner?

In short, there is no correct answer to which order you should use. Limit orders should generally allow you to exercise more control with an added risk. They should be used by those who are only willing to sell a security at a suitable price and are willing to wait if the price dips below their limit to rise back up.