The parabolic curve chart pattern is one of the commonly occurring patterns in stocks, and interestingly, it is also one of the strongest uptrend patterns you can see in a stock chart. This type of pattern often follows a period of accumulation, and it goes up the farthest and very fast in a short time. With this pattern, you could realize a huge return in the shortest possible time; however, it is the most speculative and risky — think of a bubble.

In this post, we discuss what the parabolic curve stock chart pattern is, why it forms, the stocks that exhibit the pattern, how to trade it, and when to be careful with trading the pattern.

What is the parabolic curve stock chart pattern?

The parabolic curve chart pattern derives its name from the parabola, as the ascending curving line used to trace out this pattern from the candlestick price action looks like a parabola. This pattern can last for weeks and sometimes months.  The price action pattern that creates the parabolic curve looks like a staircase. For traders who understand how to trade it, the pattern can give the discerning trader some unbelievable returns within the shortest possible time.

As a rule, you will find that the trading opportunity of the parabolic curves patterns tend to occur at or near the end of a major market advance, and the pattern usually forms as a result of multiple base formation breaks. This strong price pattern like this can provide a trend trader with magnificent high returns within a short space of time.

However, towards the end of the formation, the price usually makes the biggest move straight up into extremely overbought territory and then ends suddenly with a dramatic price plunge that falls even faster than it rose.

In some trading platforms, there are automated tools that can be applied to the charts to draw parabolic curves automatically wherever they occur. An example is the GTE parabolic tool, provided by GuppyTraders Essentials Toolbox. The images below show how the pattern looks like: 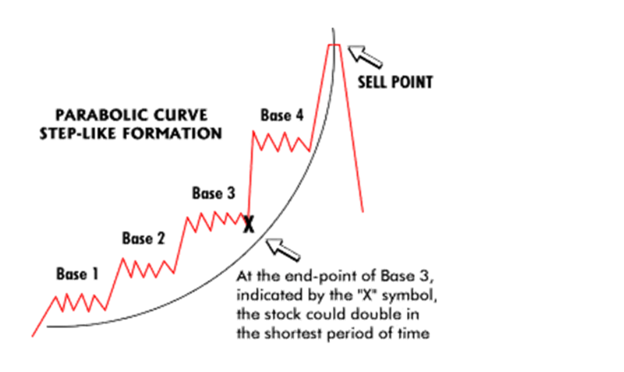 Why does the parabolic curve pattern form?

The parabolic curve pattern forms as a result of rapid price movement in a stock that many investors are interested in. As the stock is surging higher, traders and analysts talk about it, making the stock more appealing to those who have not yet bought it. Out of fear of missing out (FOMO), those traders and investors on the sidelines jump in, pushing the stock price even higher. With no more buyers to keep pushing the price up, the stock plunges hard and fast.

Many times, the parabolic curve pattern emerges near the beginning or end of a bull market advance. The pattern usually creates short pullbacks in the form of a small price range that quickly breaks out to new highs. It repeats this range pattern multiple times as it keeps going higher.

Stocks that are likely to show parabolic curve pattern

An example of the parabolic pattern can be seen in the Tesla chart above. The parabolic curve pattern mostly occurs after some interesting corporate announcement, as traders mostly try to front-run the event.

Why you may want to trade this pattern

There are many reasons you may want to trade this pattern. First, the move is usually rapid and can make you money fast. So, it’s appropriate to watch out for moves that evolve really quickly and get in fast and get out before it ends.

Moreover, the pattern can help you to discover accelerating trends within a broader uptrend. Since the pattern shows specific entry and exit points, you can make a good trade if you know how to play it.

How to trade the parabolic curve pattern

The key to appropriately trading this kind of strong trend is to get in as early as possible and then lock in your profits with trailing stops. You should have a fast exit plan and aim to secure those gains. Whatever you do, avoid riding it all through back down.

Actually, you can trade both sides:

There are things you should know about trading the pattern though. For a pattern to be genuinely regarded as a parabolic curve, the curving trend line must touch at least two points but three points are even better. You don’t use any other indicator, as it is a price action chart pattern.

You go short immediately the price action gets broken via the right of the trend line mark.

The dangers of trading the parabolic curve pattern

One of the greatest mistakes about trading this pattern is buying late when every other person has bought and the price is apparently overbought. Of course, when there are no more buyers, profit-taking takes over, and the price plunges. So, it is important to get in early, but knowing that it is the pattern in the early periods of trend development is difficult.