The Eurodollar futures contracts are trading on the Chicago Mercantile Exchange (CME) Group.

On the CME platform, a Eurodollar contract is equivalent to a Eurodollar time deposit having a notional or face value of U.S.$1,000,000 with a three-month maturity.

The Eurodollar is worth and is trading for many trillion U.S. dollars, and it’s not directly regulated by any government agency. It is, by far, the largest means of financing international transactions. As of 1997, about 90 percent of all cross-border loans were made via the Eurodollar market, and most were through Eurodollar futures market.

Eurodollars are time deposits denominated in U.S. dollars and are held at banks outside the United States, which could be foreign banks or overseas branches of American banks. Since the deposits are held outside the United States, Eurodollars are not under the jurisdiction of the Federal Reserve Board, so they are not subject to Fed’s regulations. As a result, these deposits are at a higher risk, which is why they carry higher interest rates. It can also be held in the US but it needs to be in a foreign bank.

Eurodollar trading strategies often balance up a portfolio quite nicely, by being uncorrelated against many other common markets. And if you, like us, trade algorithmically, you could easily add a eurodollar futures trading strategy without having to monitor another market, since the trading is automated. 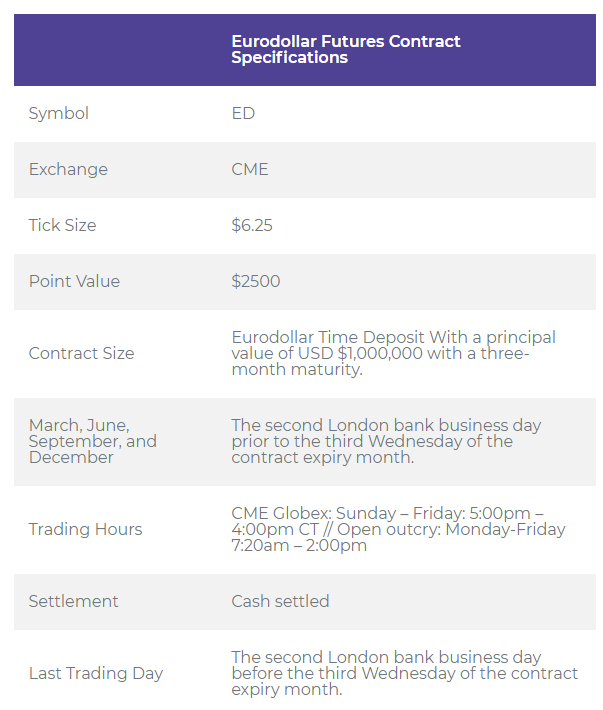 What Are Eurodollar Futures?

Eurodollar futures contracts are futures contracts whose values derive from the interest-yielding U.S. dollar deposits held outside of the US. In other words, the price of the Eurodollar futures moves in response to the interest rate offered on U.S. dollar deposits held in foreign banks, specifically London banks. They are basically a LIBOR-based derivative, which reflects the London Interbank Offered Rate for a 3-month $1 million offshore deposit.

What are Eurodollars used for?

Foreign companies and banks use the Eurodollar futures to lock in the present interest rate for the money they intend to borrow or lend in the future. Corporations use Eurodollars to settle trans-border transactions, invest their excess cash, provide short-term loans, and finance imports and exports.

The Chicago Mercantile Exchange was the first to launch trading in Eurodollar futures, which were traded on the exchange’s 1500-trader-capacity upper trading floor — its largest trading pit. Now, other futures exchanges offer Eurodollar futures contracts, and most of the trading takes place electronically.

What are Eurobank dollars?

Previously known as Eurobank dollars, Eurodollar initially referred to U.S. dollars held in European banks only, but now, the definition has expanded to include U.S. dollar deposits held anywhere outside the United States. The origin of Eurodollars can be traced to the end of World War II and the beginning of the Cold War, as the Soviets tried to protect their U.S. dollar-denominated deposits in foreign banks from the U.S. government.

When did Eurodollar trading start?

What is the difference between a Eurodollar and the Euro?

Traders have different reasons for playing the Eurodollars futures market. It could be for speculative purposes, hedging, or portfolio diversification. Others use it for arbitrage trading.

Here is a seasonal chart of the eurodollar futures market:

Where can you trade Eurodollar Futures, what exchanges?

The Eurodollar futures contracts trade on the Chicago Mercantile Exchange (CME) Group and the Intercontinental Exchange, both of which have electronic trading platforms. So, the contract can be traded from any part of the world, almost 24 hours a day during weekdays.

On the CME platform, a Eurodollar contract is equivalent to a Eurodollar time deposit having a notional or face value of U.S.$1,000,000 with a three-month maturity. But being a leveraged instrument, only a margin of about U.S.$1,000 is required for a trader to carry the contract.

What Factors move the Eurodollar Futures up and down

Here are some of the factors that affect the Eurodollar futures:

Political events: Political events and government policies, such as trade wars and tariffs can affect international trades and cause problems for companies that depend on imports and exports. Since such companies actively use Eurodollars in their business, Eurodollar futures can be affected.

Robot Trader: Exploring the Benefits and Risks of Automated Trading

Trading in Africa: 10 Amazing things you did not know!