Best and Worst Months for the Stock Market – What are they?

Considering the monthly average returns for the S&P 500 over the period 1950 through 2017, the best month for the stock market in December, followed closely by November and April. On average, the market made the gains in those months. On the other hand, the worst month is September, followed by August and June; the market made negative returns on average in those months.

This topic will be discussed under the following headings:

In time series analysis, seasonality refers to any regular fluctuation or pattern that recurs or repeats over a one-year period. That is, it considers the tendency of a variable to show a certain pattern in a certain period of the year.

Seasonality has been observed in stock returns. In the stock market, seasonality refers to particular timeframes when individual stock, sector indices, and broad market indices are subjected to and influenced by recurring tendencies that produce patterns that are apparent in the investment valuation. That is to say that due to certain seasonal factors, the stock market tends to perform better in certain months of the year than in others.

For example, it has been found that the stock market tends to perform better towards the end of the year and the beginning of the new year (winter) than it does during the summer months. Academics have given different explanations for the seasonality effects in stock prices, with some linking it to weather, planting, and harvest seasons. Some also point to changes in people’s needs during the various periods of the year.

Whatever the explanation is, the fact remains that the market tends to perform better in certain months than in others. As a result of the regularity of this anomaly, some traders and investors look for ways to exploit this tendency by investing at different periods of the year and selling off at another period. This gives rise to certain Wall Street maxims, such as “Sell in May and go away.”

However, while seasonality patterns are quite regular and can be exploited, it does not offer certainty, just like every other market pattern. The fact that the market returns have been better in certain months than others does not guarantee that the market would behave the same in the future!

Apart from individual stocks, seasonality patterns are seen in the broad market index as well. Different broad market indexes, such as the S&P 500 Index and Dow Jones Industrial Average, have been shown to perform better in certain months of the year than others. Some months have been shown historically to be consistently bullish and some consistently bearish. This is why you often hear some seasonality slang, such as the January Effect, Sell in May, and End of Year Rally, on Wall Street.

The S&P 500 Index is the most popular and definitely the most studied for seasonality effects. The index consists of the 500 most-capitalized stocks in the U.S. stock market, and it’s often seen as a representative of the American stock market.

From various studies that examined the monthly returns of the index over a period of 67 years (from 1950 to 2017), it was shown that the index tends to make strong returns around the turn of the year as well as during the spring months of April. August and September are traditionally known as the down months. Despite the record drops of 19.7% and 21.5% in 1929 and 1987 respectively, the average return in October is positive historically.

Take a look at the chart below: 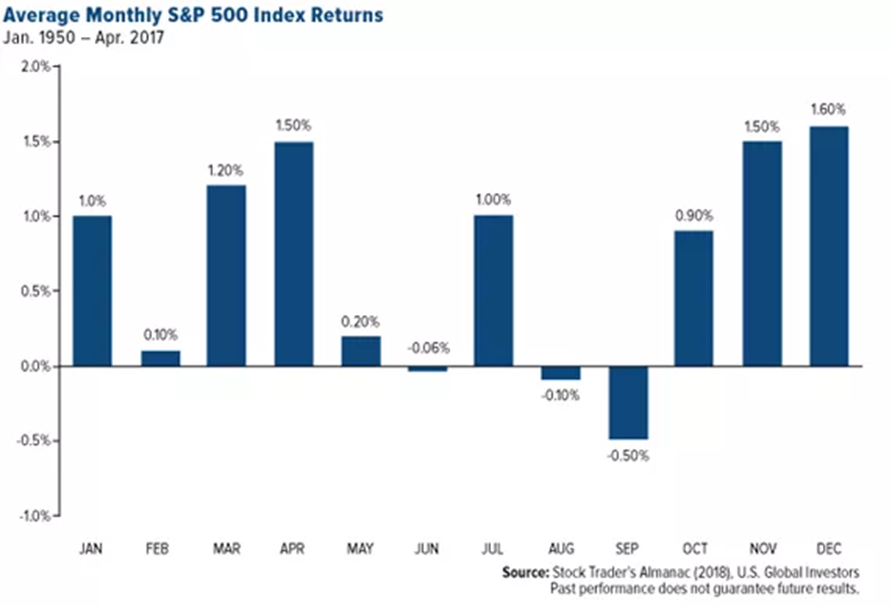 As with the S&P Index, the DJIA tends to perform best around December and April and perform worst around September. Take a look at the two charts below. The first one used data from 1956 to 1982, while the second made use of data from 1983 to 2010. 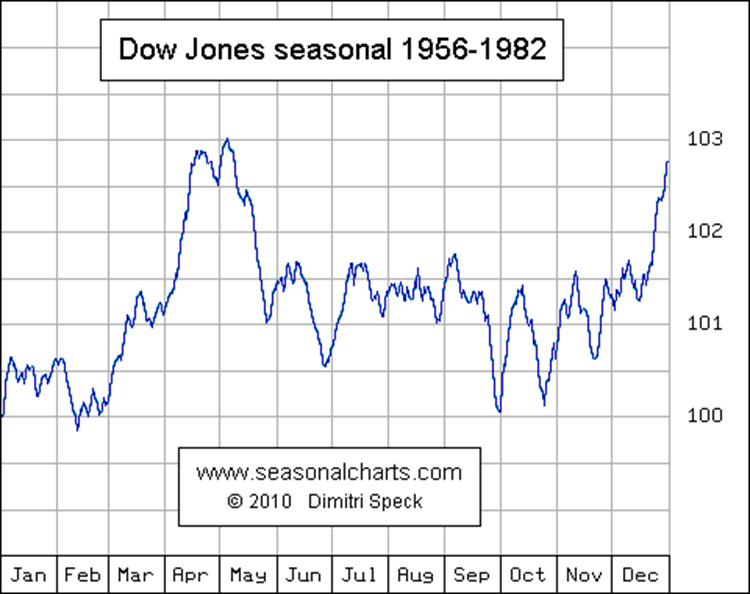 The seasonal chart of the Dow Jones above, which was based on data from 1956 to 1982, shows the seasonal tendency clearly. You can see why it was advantageous in those years to stay out of the markets during the late spring and summer months, as it is often said on Wall Street: Sell in May and go away! 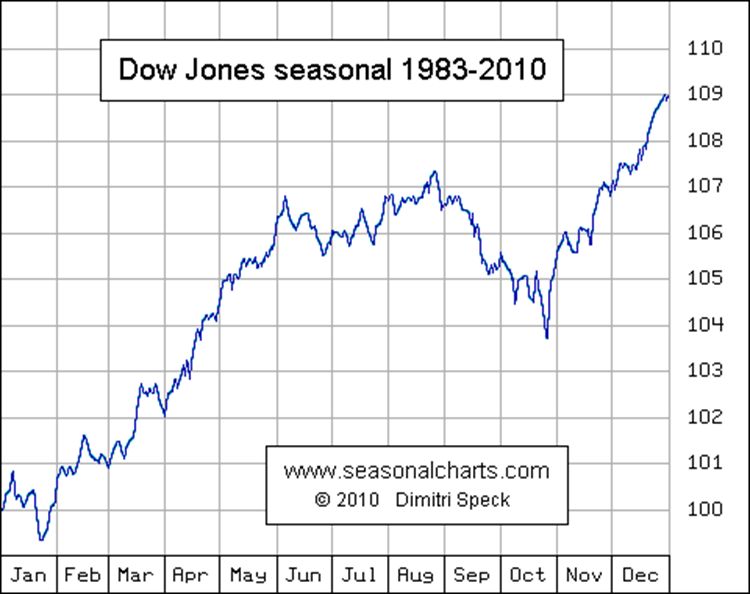 The second chart above used data from 1983 to 2010, and as you can see, it shows the seasonal course of the Dow Jones since 1983. If you study the chart closely, you will notice that the seasonal tendency, though still present, changed in the pattern — during bullish market years, the best seasonal selling point would have been in July, instead of May, which is two months later than the previous chart indicated.

So, while the seasonal pattern changed a bit, the seasonality tendency was still there. This can be seen from the year-end rally and the decline in September. October seemed to be the worst month though, but this can be explained by the outrageous October 1987 crisis when the market declined by 21%. This goes to show that even with the most fundamental changes in the overall market environment, seasonality tendency still remains in the market. The weaknesses in September and the rally towards the end of the year remained all through the years.

What are the best months for the stock market

From our discussion so far, you can easily identify the best months for the stock market — at least, judging from the broad market indexes. The monthly historical returns of both the S&P 500 Index and the Dow Jones Industrial Average show that the best months for the stock market are November, December, and April. The months of October and January also performed well but not as well as the months of April, November, and December.

However, the best months may be different for individual stocks because each stock is affected by factors that are peculiar to it. For example, companies that produce and supply gasoline may do well during the summer months and do poorly during the end of the year winter months. And here’s why: people drive long distances for long summer vacations and so make more use of gasoline, so such companies tend to make more sales during such periods. During the winter, people don’t tend to drive that much and thus, don’t use much gasoline; as a result, sales drop.

However, for most stocks, the best seasons remain at the end of the year and the turn of the new year, up to April. By May, the market returns start to decline.

What are the worst months for the stock market

But not all stocks perform poorly during those months. There are companies whose products and services sell the most during the months of September and August. For such companies, those months are unlikely to be their worse months because investors might actually be eager to invest in them during such periods.

However, many stocks and the broad stock market indexes do poorly in August and September. And the reason is not unconnected to reduced spending on investment immediately after summer vacations. By the time Q3 reports get to the market in October, investors’ interest in the market starts increasing again up until the end of the year.

What is the January and October effect all about?

Some of the seasonality slangs you will hear on Wall Street are the January Effect and the October Effect. But what do they mean by that?

The January Effect is a perceived tendency of stock prices to increase during the month of January. It was first observed by investment banker Sidney Wachtel in 1942. There are many explanations for this, but most analysts generally attribute it to an increase in buying, which follows the drop in price that typically happens in the last days of December when investors, engaging in tax-loss harvesting to offset realized capital gains, cause sell-off. Also, the increased buying activity in January could be attributed to investors buying up stocks with their year-end cash bonuses. Unfortunately, this effect is no longer as pronounced as it used to be.

On the other hand, the October effect is a perceived tendency of the stock market to decline during the month of October. Market experts consider this effect to be more of a psychological expectation than an actual phenomenon, as most statistics go against the theory. Since some of the large historical market crashes occurred during this month, such as the Panic of 1907, Black Tuesday (1929), Black Thursday (1929), Black Monday (1929), and Black Monday (1987), some investors may be nervous during October.

For example, the great crash of 1987 that occurred on Oct. 19 (Black Monday 1987) saw the Dow declined by 22.6% in a single day, which is arguably the worst single-day decline. The 1929 black days, of course, were part of the process that led to the Great Depression, which is considered the worst stock market crisis in history, only rivaled by the mortgage-crisis-induced Great recession of 2008 that nearly took out the whole global economy with it.

What do they mean by Sell in May and go away?

The seasonal slang, “Sell in May and go away” is well-known on Wall Street. It refers to the idea that some stocks have historically underperformed in the six-month period between May and October compared to the other six-month period from November to April. Followers of this theory believe that, as warm weather sets in, low volumes and the lack of market participants (presumably on vacations) cause stock prices to decline, so they prefer to stay out of the market between May and October.

Following that approach to investing would mean selling off equity holdings in May and buying them back again in November. Some investors use that approach and find it more rewarding than staying in the equity markets throughout the year. While this may work for some stocks, it does not work in all stocks, which is why many financial advisers and stock market strategists don’t support the idea.

Many factors can influence seasonal patterns in the stock market; they can range from weather events, such as temperature in winter vs. summer, to calendar events, such as quarterly reporting expectations, announcements, and so on. This is especially true if these events are recurring and provide a sustainable probability of working the way they worked in the past.

Another important aspect is volatility. Some analysts believe that it is the most important factor affecting the other factors of seasonality. This is why it is the common factor in all potential causes of the seasonality effect. So these are the best and worst months for the stock market.