Three Outside Up Trading Pattern

Last Updated on 19 September, 2022 by Samuelsson

The three outside up pattern is one of the most reliable candlestick patterns that can tell you about a potential price reversal. One good thing is that the pattern is not difficult to identify if you know it since it appears quite commonly on the price chart, and you can easily formulate a strategy to trade it.

Continue reading to learn the following:

What is the three outside up trading pattern?

The three outside up trading pattern is a pattern that forms on the candlestick chart over three trading session. It consists of three candlesticks and is typically formed in a downtrend or an extended downward price swing in an uptrend, where it may indicate a potential price reversal to the upside.

Some traders formulate their swing trading strategies with this candlestick pattern alone or in combination with other trading tools owing to its reliability. We will discuss in detail how you can use the pattern in your trading, but let’s dissect the anatomy of the pattern first.

The anatomy of the three outside up trading pattern: how to identify the pattern

Basically, the three outside up pattern consists of three candlesticks, and as you know, each candlestick represents a trading session, which can be a full trading day, week, or month, or even an intraday time session like 4 hours, 1 hour, 30 minutes, or any timeframe. Using the daily timeframe, for example, the pattern forms over three trading days with three candlesticks: 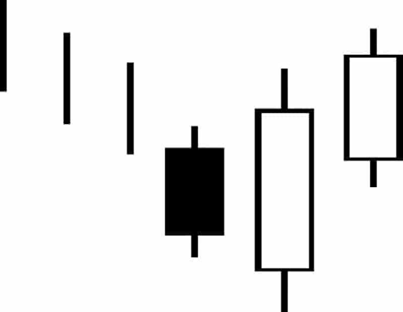 As you may have observed, for the pattern to be considered well-formed, the following conditions must be met:

Interpreting the three outside up pattern

The three outside up pattern has a strong bullish implication as it forms after an extended downward price movement. It is seen as a reliable reversal setup, and most smart traders add it to their trading arsenal. The formation indicates a buying opportunity in the market, which can be traded alone or when supported by another analysis.

Finally, the third trading session confirms the reversal suggested by the first two sessions when it closed as a bullish candlestick, with its closing price higher than that of the second trading session. Since this pattern occurs in a downswing, it strongly indicates a possible upward reversal in the price direction.

As a matter of fact, many traders consider the pattern a reliable trade signal on its own. Even if the bullish engulfing candlestick in the second session is seen as a fluke, the third session closing higher than the second session shows that the price is actually determined to head upward. The pattern is more significant if it happens at a known support level — it means that a rebound has occurred. But do you know why the bullish reversal could happen at that level?

The psychology behind the three outside up pattern

Looking at what happed during the three trading days (sessions) that form the pattern, the first day ends with a small bearish candlestick that, even though it looked like a continuation of the downswing, actually showed that the bears are getting exhausted. The weakening bear’s momentum emboldened the bulls to step up and take control, which is confirmed by the long bullish engulfing candlestick that formed the next trading day.

This larger candlestick tells a lot about the shifting market sentiments — after a long period of domination by the bears, the bulls are finally taking control and beginning to dominate, signaling that the price movement in the foreseeable future is to the upside. What follows on the third trading day is another bull’s domination, which further confirms that the bulls have taken control of the market direction.

Interestingly, like other bullish reversal candlestick patterns, the three outside up pattern tends to form around a known support level, and the reason is simple. A support level is often a demand zone — a price level where there are many buy limit orders. Aside from the buy limit orders, some traders who are on the sidelines are monitoring the level to know how the price reacts at that level.

So, when the price falls to a strong support level where there are many buy limit orders, the already exhausted bears may not be able to clear all the buy orders at that level to push the price further down, so the price stagnates. Seeing that the bears couldn’t push any lower, the buyers on the sidelines flood the market with their buy market orders, which push the price up. What you get is a tall bullish engulfing candlestick, followed by another bullish candlestick the next trading day, which closes above the close price of the engulfing candlestick.

The momentum is now with the buyers (the bulls). Only a few sellers are still willing to sell at this point because the price has gotten so low for them to want to sell any lower. As a result, the bulls don’t have any serious resistance on their way. They easily take out the few sell limit orders in the market and keep pushing the price up in search of sellers to fill their orders. This gives rise to a price reversal.

Using the three outside up pattern in swing trading

The trading tools you can combine with the pattern

There are tools that are used in price action trading which can be very useful in trading the three outside up pattern. The common ones include:

Trend lines are very helpful in identifying the direction of the trend so that you don’t trade against the trend. With the three outside up pattern, you are interested in an uptrend. Apart from spotting the trend direction, trend lines can also act as dynamic support or resistance levels, where the price is likely to reverse.

When the market is in an uptrend, you attach the trend line to the lows of the pullbacks (downward price swings) so it acts as a rising potential support level for future downswings. If the price makes a pullback to the trend line in the future, look for the three outside up pattern there. A pattern that occurs there is more likely to play out very well.

It is important to identify support and resistance levels when trading a price action setup because setups that form around those levels are more likely to play out well. The three outside up pattern is a bullish setup, so it makes sense to look for it around a support level.

However, in an up-trending market, the resistance levels would often become support levels when the price climbs above them. Whatever the case, when the price falls to a supporting level, look for signs of a price reversal, especially the three outside up pattern. When you see the setup there, it has a high probability of success.

A long-period moving average, such as the 200-day or 100-day moving average, can help you to identify the direction of the long-term trend in a stock. But more importantly, it can serve as a dynamic support level that improves the odds of any bullish reversal setup, including the three outside up pattern.

When the market is trending upward, the moving average is below the price bars and sloping upwards. If the price makes a decline to the level of the moving average, watch out for the three outside up pattern. A pattern that forms there will likely yield a profitable outcome.

A market in an uptrend

When the market is trending upward, the upswings will be bigger and more prolonged than the downswings. So, in an uptrend, swing traders normally focus on the upswings and try to capture them one at a time. Interestingly, the three outside up pattern can help them to do that more effectively.

To swing-trade an uptrend, wait for the price to pull back to a trend line, long-period moving average, or support level. Then, watch out for the three outside up pattern, and if you see one, place a buy trade at the open of the next day after the pattern has completed.

You can use the three outside up pattern to anticipate when the price is about to head upward after hitting the support level. Here is what to do:

Some swing traders use the three outside up pattern to spot a potential reversal of a down-trending market, but we don’t advise you to do this if you are a beginner. What they do is to watch how the price reacts after it has fallen to a well-known support level. If the price can break below the support level, they watch for the three outside up pattern, which is a strong reversal setup.

If the pattern forms, they go long on the next candlestick and place their stop loss below the support level. Once the price moves in their favor, they move their stop loss to breakeven. Their take profit is set at the nearest resistance level.

Creating a trading strategy with the three outside up pattern

Here is how you can formulate a trading strategy with the three outside up pattern:

Learning to how to swing-trade stock

While you can teach yourself how to trade by studying all the books and other trading resources you can find online, you may end up wasting too much time without learning the important stuff that can make you a profitable trader. The easier way to learn swing trading is to enroll in a swing trading course.

If you simply intend to make money from trading stocks without bothering to learn how to analyze the markets to find the stocks to trade and all those hard stuff, you can subscribe to a reliable swing trading signal service that would tell you which stocks to buy and when to open and close your trades.

Here you can find our Candlestick archive with many articles covering the subject.