Candlestick patterns have become some of the most used analysis tools among new traders. With their colorful bodies and long wicks, they’re easy to read and are believed to provide clues about where the market is headed for next. One such candlestick pattern is the three inside down.

A three inside down is a bearish candlestick reversal pattern that forms at the end of a positive trend, signaling a shift in the direction of the trend. The pattern consists of a positive candle that’s followed by an inside bar, after which the price breaks down below the open of the first candle.

In this guide to the three inside down you will learn everything you need to know about the pattern. This includes its definition, meaning and ways you can improve the performance. In addition to this, we’ll have a look at a few trading strategies that are built around the three inside down.

Three Inside Down Definition & Meaning As said, the three inside down consists of three candles. Here is the exact definition:

What Does a Three Inside Down Tell Us?

All candlestick patterns have their unique shapes, telling us something about the market and the forces that made the pattern come about. And as traders, we’re very interested in knowing more about how the market performed certain moves, to improve our understanding of the market itself. Doing so we hope to find recurrent patterns that we could use to our advantage.

In fact, we often get trading ideas just by watching market data, and many of our trading strategies have come about this way. Sometimes it might be that certain moves give rise to a question and that we in the process of answering that question come across some interesting findings which we then make a strategy of.

So, let’s see what a three inside down might be telling us about the market!

First of all, we have to acknowledge that the market is in a bullish state as the three inside down forms. This means that market sentiment is mostly bullish, and that most market participants expect prices to go up.

The bullish sentiment ensures that more traders and investors stand ready to buy, creating high demand which pushes the market to new heights. This is when we see the first bullish candle of the pattern form.

However, having gone up for an extended period of time, bulls are depleted of energy. This results in a negative gap, which is then followed by uncertainty, resulting in a candle that both opens and closes within the range of the previous candle.

With bearish forces having succeeded to constraint the bullish trend, many market participants are now holding their breath, and await the direction of the next candle. Many choose to regard the high and low of the previous two bars as significant resistance levels, beyond which a breakout would suggest a continuation in that direction.

As the last candle breaks down below the low of the pattern, the common perception becomes that bears won the fight, as bulls didn’t have the strength to respond to the increase in selling pressure. As a result, selling pressure increases even more and drives the market in the direction of its new bearish trend.

Three Inside Down Example

Here is an example of the three inside down pattern: 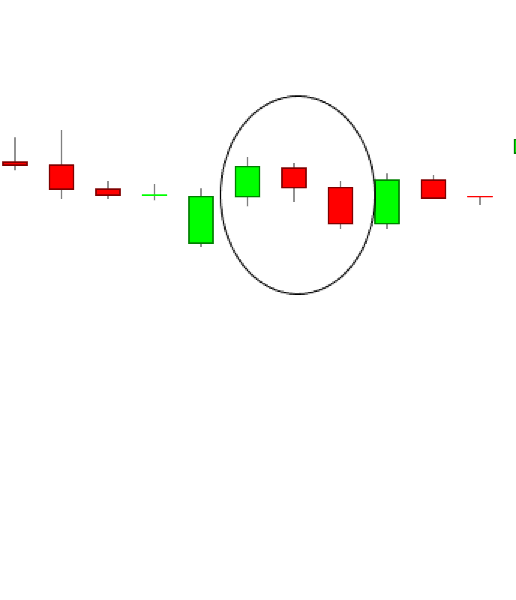 Three Inside Down Example

How to Trade the Three Inside Down Pattern

While it may be tempting to rush straight to the markets and try to find and act on the three inside down pattern, its rarely a good idea. Most candlestick patterns need additional confirmation to work well, which means that you need to add other types of technical analysis to confirm your findings.

Now, the type of filter and condition you need to add depends greatly on the market and timeframe you’re playing with. And to get an idea about what works in your case, you definitely should resort to backtesting of some kind.

However, there are some filter categories that tend to work well across many markets and timeframes. In our experience, some of these include:

Let’s take a quick look at each filter type!

While the price of a market may provide us with a lot of important information, we may get to know even more by adding volume to our analysis.

We ourselves use volume quite a lot and have found that it can be of great help in certain situations. Here are two of the conditions that we have come to use quite often together with volume:

Of course, you may also produce conditions that are tailormade to the anatomy of the three inside down. For example, you may demand that the bearish candles are formed with much higher volume than the first bullish candle.

In many cases, you’ll find that there are times when a market is overly bullish or bearish on a recurring basis. It may be that Mondays are extra bearish, or that the second half of the month tends to be bullish.

By finding seasonal or time-based tendencies like these, we may decide to only take a trade when the tendency concurs with the three inside down pattern. For example, we might be more inclined to short the market on a three inside down forming on a Wednesday, if Thursdays and Fridays tend to be bearish.

Here are the different things we often look at with regards to seasonality:

As always, you should use backtesting to determine what works on your market.

Three Inside Down Trading Strategies

As we now have had a closer look at how you may improve the three inside down, we’ll now move on to trading strategies that rely on the pattern.

It’s important to note that the strategies shown aren’t ready to be traded in their current form. They’re merely examples of how we would go about to create a trading strategy based on the pattern, and may work if applied to the right market and timeframe!

Trading Strategy 1: Three Inside Down With Breakout Condition

As we went through earlier in the article, many traders regard the move below the low of the pattern as a breakdown. This means that they assume that the market took out a significant support level, which enabled it to continue in the direction of the momentum.

Now, some of the biggest issues there are with breakouts, are false breakouts. In fact, most breakouts are false, making the trading style mostly unprofitable in its purest form.

Now, one of the most common solutions to this is to add some distance to the breakout level, which in this case is the low of the pattern. This helps to remove those occurrences when the market just goes slightly beyond the breakout level but quickly retraces.

Here are the rules we’ll be using. We go short if:

Then we exit after 5 bars. 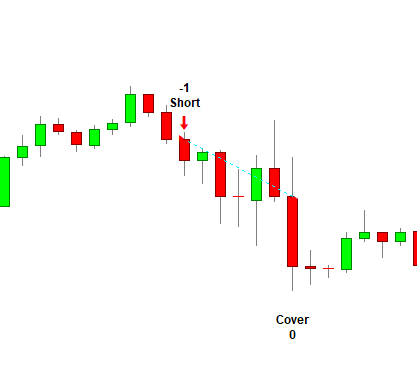 Three Inside Down Trading Strategy

Trading Strategy 2: Three Inside Down and ADX condition

One of our favorite indicators is the ADX indicator. It has helped to improve quite a lot our strategies over the years and remains a powerful tool in our toolbox.

ADX simply measures the strength of a trend, with readings above 25 suggesting a strong trend, and readings below 20 indicating a calm market.

In this strategy example, we’ll demand that ADX is above 25 do enter a trade. This suggests not only that the bullish trend is strong, but also that it may be nearing its end.

As in the previous strategy, we exit the trade after 5 bars.

Three Inside Down Trading Strategy

By now you hopefully have got a better understanding of the three inside down and how it works.

However, we’d like to stress the importance of validating everything yourself before going live. Unfortunately, most technical analysis doesn’t work as shown in the textbooks, and will lead to nothing but losses if traded live.

For those of you who want to learn more about profitable trading, we recommend that you read our guides to swing trading or algorithmic trading to learn more. You may also want to have a look at our guide to building a trading strategy!