“Let your winning position run” has been the maxim of successful traders but what does this mean? How do I turn small trades into big winners? You’ve probably asked yourself this question over a thousand times.

The pyramid trading strategy is a technique where you add more positions to your winning trade as the trend continues to move in your favor. This technique enables you to maximize profits in one single move.

Today we’re going to discuss how you can turn your small trades into big winners —that’s when done properly, this is called pyramiding. To help you understand this topic we will discuss it under the following headings:

What is pyramid trading?

Pyramid trading, or simply pyramiding, is a trading technique where you add positions onto your winning trades as the market continues to move in your favor

Pyramiding allows for significant profits to be made as the price moves. The advantage here is that you don’t even need to increase your risk if the security performs well. This strategy works both in an uptrend and a downtrend if done correctly, and the gains are significant with minimum to no risks.

However, not all trades are suitable for pyramid strategy, as a matter of fact, most of them, but the ones that are can make you large profits. A pyramid trade that returns you a 10:1 reward/risk ratio might be the only winner you need for four to five months and that’s why it’s crucial to understand how to trade it properly.

There’s a clear difference between having one position producing 200 pips and multiple positions bringing in more than 600 pips. No! This is no position sizing tricks or some magic secret — it is simply using your floating profits to make more money.

Pyramiding allows you to play with the market’s money because as the market moves in your favor you trail your stop up or down to lock your gains when you add more positions. The great thing about this is the risk which remains constant or decreases as you lock in your gains but your potential profit increases significantly — that’s if you do it properly.

One thing to note is while the rewards to pyramiding are huge, the risk can be more significant if not done properly. If your stop-loss is not properly trailed, your overall risk increases because each time you add a new position and your stops remains constant, your risk level will be so high to the extent of blowing up your trading account. This is not about trailing your stops but rather trailing it the right way because when your stops are too tight like you would in a non-pyramid trade, the market moving in your favor increases the chances of pulling back and kicking you out of your entire position.

A good rule of thumb is to use this strategy only when you’re confident that the current trend in the market is strong. It must not be a breakout, it just has to be significant enough for you to expect a serious momentum behind it.

Now that you’ve understood what pyramiding is and the potential risk involved when done incorrectly, let’s now look at a common misconception about pyramiding — most people mistake pyramiding for averaging down.

Pyramid trading Vs. Averaging down

Pyramiding isn’t just adding to the existing position. This is a common misconception about the pyramid strategy — some even confuse it with averaging down. In pyramid trading strategy you only add to winners; that is, you use the profits from the winners to carry a new position. It is the opposite of averaging down.

Averaging down is a trading strategy where a trader adds positions to an existing one after a drop in the price of the security. The implication of the second trade is to decrease the average entry price at which the trader entered the market.

For example, if a trader bought 100 shares of a stock at $30 and the price of the stock dipped to $20, the trader could buy an additional 100 shares of that stock at that price — the average price will now be $25 per share. This sometimes is suitable if a trader wants to buy and hold a stock regardless of performance, this is also known as Dollar Cost Averaging (DCA).

The downside to this as compared with pyramiding is that you can lose significantly when you keep on purchasing shares of a stock that’s showing weakness. Pyramiding has a rule never to add to a losing position.

This strategy works because you will only add to positions that are in profit and showing signs of increasing strength. The trend of the securities increases in strength as it breaks to new highs, or the price fails to make a lower low. Generally, you are seizing the opportunity of the trend’s continuous strength by adding new positions with each successful wave of the trend.

Furthermore, when you start using the pyramid strategy, the urge of taking profits too early will be significantly reduced. Instead of closing positions because of a potential pullback in price, you will be forced to be more calculated and watch to see if the reversal is just the market taking a pause or an actual change in trend. This gives you the foresight that you do not have to have only one position in a given opportunity, but you can make more trades on every potential impulse.

To illustrate this scenario better, let’s assume you are to make one trade for 100 contracts at one entry, you can test the market first by making your first trade on 25 contracts and then buy more contracts if the first trade shows a profit.

By pyramiding, you may end up with a much larger position than you would if you had bought 100 contracts at a go, as five or six entries might have resulted in a trade of 125 contracts or more. You can see now that this would have been done without you altering your position size or increasing risk because your initial position is smaller and additional positions are only added when you make profits from prior ones.

Okay here’s a quick warning and mistakes most beginner traders make. A very common habit among the lots of them which is applying every strategy they read or hear about to just about any trade.

Pyramiding can not be applied to every trade because your trading system might give you a buy signal and the trend direction will change. Some naive traders, in this kind of scenario, will increase their stop loss as the price move against them (thereby increasing their risk).

You shouldn’t follow this pattern because that is a sure-fire way to blow your account. Don’t ever add to a losing trade; the only loss you should incur should be the loss of your most recent trade. For the other trades, when the trailing stops get kicked, be happy with what you’ve got!

Another problem with this strategy comes from the market itself. Market gaps are going to be your biggest worry in this type of trading because gaps can cause your stops to be kicked easily, exposing you to more risk from the trades you added at higher prices. A significant gap in the market can hurt your trades and cause you a huge loss.

Large swings in price between entries can cause your position to become “top heavy”. What this means is that any potential loss on any of your new entries could wipe off all profits — and even more, than all your previous positions have made.

The type of market to use pyramid strategy

Now, you have a good understanding of pyramiding and some of its problems. But before you on running to click buy on your trading software read the following carefully.

You can not trade the pyramid strategy successfully in all market conditions. It works best in a trending market with huge momentum.

Pyramiding in a ranging market is not a good idea itself. Price moves up and down within a horizontal channel, and your stops will be triggered more quickly resulting in losses. Take a look at the hourly chart of Palladium below. 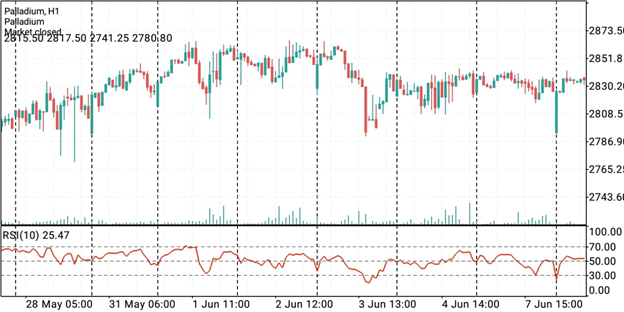 There is no way you’d trade this market using the pyramid strategy without getting losing money. The choppy nature of this market makes it more difficult to trail your stop.

Also, a volatile market is more dangerous for pyramid trading because the high swings in price might come down and hunt your stops and leave you with more losers than you can imagine.

Example of a pyramid trading strategy

For clarity purposes, let’s apply this concept to the micro E-mini Nasdaq index. Let’s assume we have $2000 in our trading account. The maximum risk we can take is 2.5% per trade, in dollar terms that’s a $50 stop loss per position. A stop will be set so that we won’t lose more than $50.

We look at the chart of the index and we see a short-term low and place our stop just below it. If the current price is $50 away from our entry, we’ll have a buffer — let’s say $55. So now we go long 1 contract and hang on to the trade, selling it whenever we see a reversal. We can also add more positions when the price continues to show strength thereby giving us more profit potential. But if the price dips we will only lose $50.

Now, let’s take a live look at an example using a 1-hour chart of the Micro E-mini Nasdaq index (US100). The ellipses are our entry while the lines are the prices our stop-loss would be placed after every successful move higher. 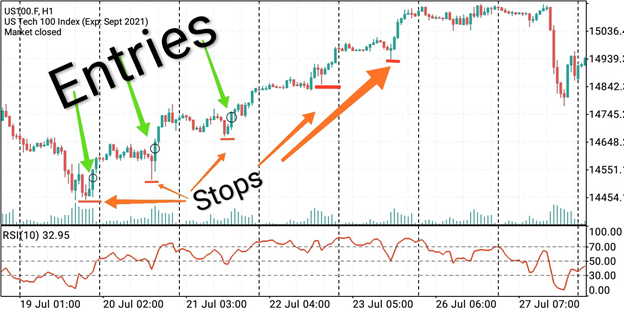 In the chart above, trade entries were based on market structure — a long position is opened when the high of a short-term low is broken. The stop-loss is moved up to the last entry point after a new entry, and if a stop is hit, all positions will be closed.

Our entries are 14518.30, 14667.30, and 14731.25 as we add to our trade with each break of a new short-term low’s high. As price continues to rally and create new short-term lows, we trail our stops to the nearest prior swing low. Finally, at the top of the right-hand side of the chart, you can see a huge dip in price. This is where we take out all our positions and walk out of the market.

Pyramiding can be a profitable trading strategy when done properly. However, it requires experience to know when to use it and when not to. Note that your stopped might be hit often at breakeven as discussed above but a good trade with a 10:1 return every three to four months would be worth it.

Another crucial point to remember is never to add to losing position. This is a common mistake most traders make. If a trade is moving against you, it is better to accept that one loss than adding to it and increasing the chances of blowing your trading capital.

You should not let greed get the better of you. The temptations of adding to winning trades may have you adding more positions than necessary. In that case, you’ll be overtrading, and it won’t be long before you make one mistake that will cost you all your potential profit. Trail your stops properly and you’ll be on your way to being a successful pyramid trader. 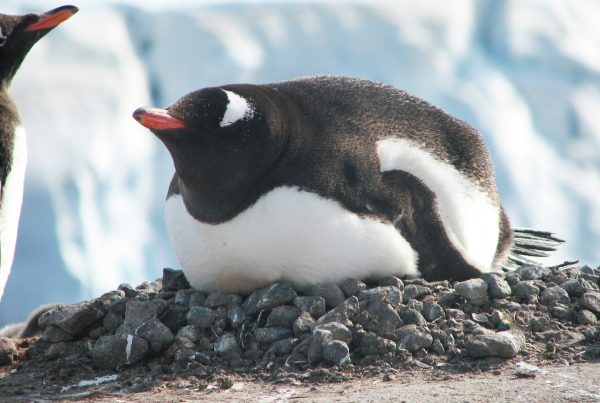 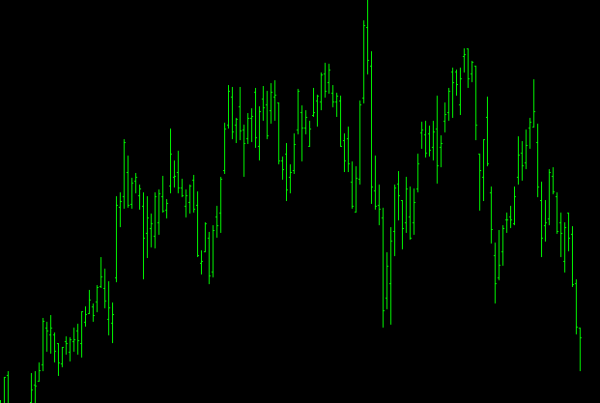