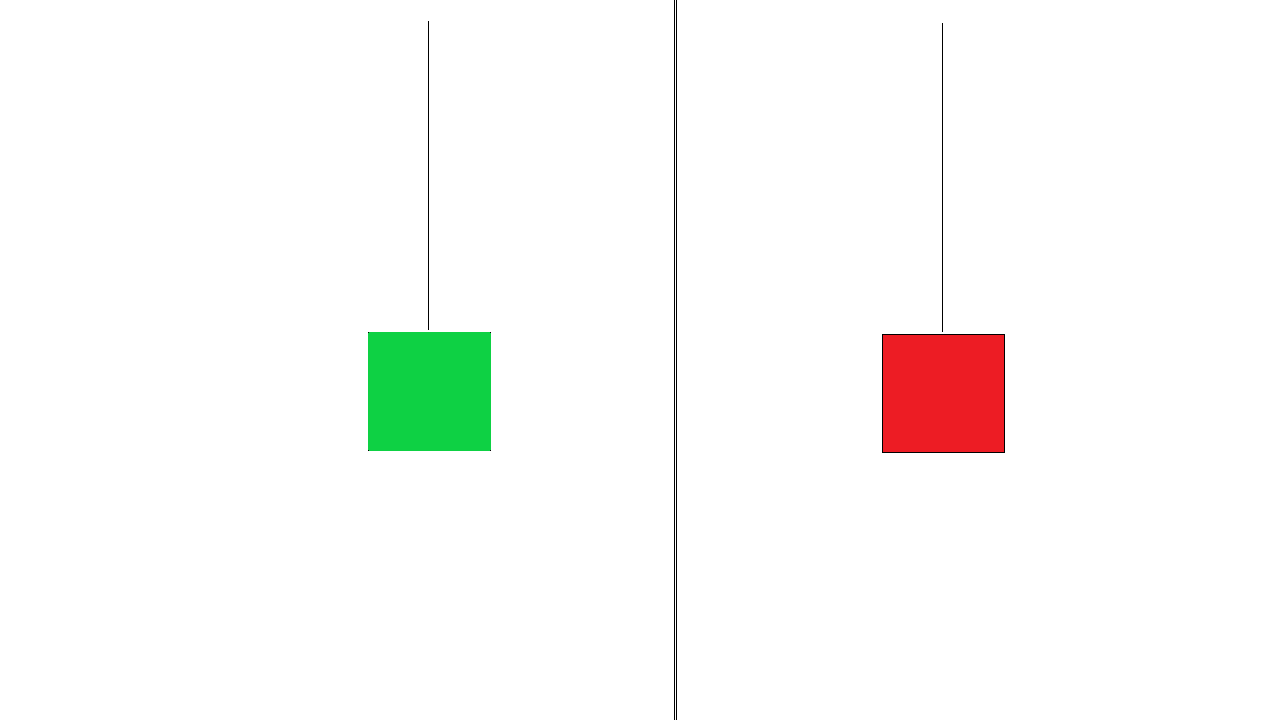 Candlestick charts have become some of the most popular charting methods for technical traders. The colorful bodies of the candlestick charts makes it easy to see the movements of the market and make out patterns. In fact, there are many candlestick patterns that are commonly used by traders, and one of those is the inverted hammer.

The inverted hammer is a one-candle pattern that forms after a downtrend and signals an imminent reversal of price. As such, the market is considered to initiate a bullish trend after forming the pattern. As to its appearance, the inverted hammer has a small body that’s found in the lower half of the range, with a long wick to the upside. It’s named “inverted hammer” for a reason!

In this article, we’re going to have a closer look at the inverted hammer pattern. We’re going to cover it’s meaning, how you spot one, some examples, and also a couple of trading strategy examples.

How to Identify an Inverted Hammer 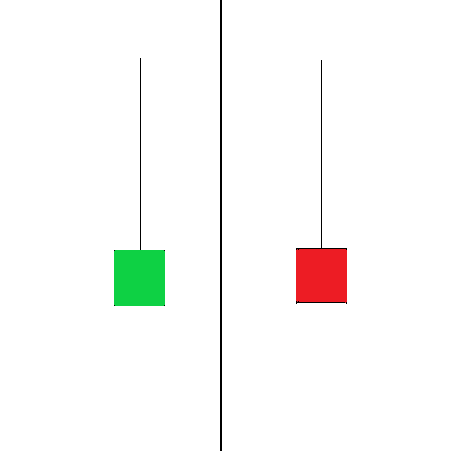 An inverted hammer needs to meet the following conditions:

The inverted hammer is the same pattern as the quite famous shooting star formation, with one major difference:

Apart from this difference, both patterns are exactly the same!

Here follow some examples of the inverted hammer pattern: 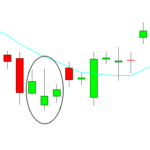 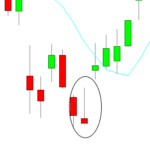 What Does an Inverted Hammer Mean?

Every candlestick tells a unique store about the market and how the buyers and sellers interacted. While these stories, like the one we’re going to share with you now, aren’t completely accurate, they’re perfect to get going with your own analysis of the markets.

Here is the story of the inverted hammer Pattern:

Bearish sentiment is prevailing as the market heads lower. Most market participants are bearish on the market and believe that it will continue down.

However, as the market opens the next day, the bears have started to doubt that the market is headed much lower. For the rest of the day, sellers and buyers remain equally strong, and the market closes around the same level it opened. However, the long upper wick and the small lower wick signals that buying pressure was a little stronger than selling pressure.

This is a major difference to the previous state of the market, where sellers dominated the scene. The increased confidence of the buyers becomes the end for the downtrend, and a bullish trend emerges shortly thereafter.

How to Improve the Accuracy of the Inverted Hammer

When it comes to candlestick patterns like the inverted hammer, you shouldn’t rely on it as your single entry signal, in most cases. Most traders would agree that a filter or additional condition is necessary to improve the performance of the pattern.

In addition to that, it’s important to use the inverted hammer with a market and timeframe where it works well! This is best learned with the help of backtesting.

However, in this part, we wanted to share a couple of methods and filters that have yielded good results for us previously. Many of the strategies we trade live make use of the filters mentioned, or some variation of thereof.

1. Seasonality and Time of Day

One great and often overlooked aspect of the markets is the time element. Different patterns and strategies may work very different depending on the time of day, day of week, day of month, or any other measure.

In our own trading, we take advantage of this when we see very clear tendencies. For example, if we have a gap strategy that works terribly on Mondays ( which has been the case several times) we might not include Mondays, since the weekend gap distorts our signal too much.

Tendencies of this sort exist everywhere, albeit not with every strategy. You could trade strategies that only go long in one half of the month, and short the other, or only trades on even or odd days. In addition to that, you should also have a look at the time of day. For some intraday strategies, a signal that occurs at the beginning of the trading session may be very relevant, while signals during the rest of the day aren’t worthwhile at all.

Be sure to look up the case with your market, as it varies greatly with different markets. Again, backtesting is very good for this.

Another great way to filter out bad trades, is by accounting for volatility. A strategy or pattern might work very differently, depending on whether it was executed in a low or high volatility environment!

In the strategy examples that come soon, we’ll cover an indicator we know has a lot of potential to enhance a strategy.

However, an easy way to gauge the volatility of the market, is by simply watching the range of the bars. If you have tall and strong candlesticks with long wicks, then it’s a sign that the market is quite volatile. Of course, the opposite applies to a calm market. You could use the average true range indicator to quantify your observation.

In a volatile market, it could be that the patterns you’re looking for form much more easily than in a less volatile market. Markets are random to a great extent, and when you add in volatility, the big swings could form the pattern out of randomness.

While the above train of thought seems sound, you will find that low volatility and high volatility could both work well. It’s, again, really a matter of finding what works well with your market!

Sometimes reversal patterns like the inverted hammer might seem to occur at the bottom of the range, while they’re actually at the top of the trend when looking at higher chart resolutions.

For example, an inverted hammer happening after a downtrend in the 60-minute chart might seem to tick all boxes, but be part of a bigger trend in the 240-minute bars.

If you’re working with lower resolution charts, you could benefit from watching the price on higher resolutions as well.

Generally, a trend is stronger the higher the timeframe. As such, if the market is trending up in the 240-minute chart, but down in the 5-minute chart, an inverted hammer will probably have greater odds of success. The trend on the higher timeframe signals that the market is headed up soon, and as such, what you see in the lower timeframe is a temporary pullback that has come to an end.

Now as we have covered some ways you can go about to improve the profitability of an inverted hammer signal, it’s time to look at some more hands-on examples of trading strategies that implement the pattern.

Please remember that the strategies discussed below aren’t meant for live trading. They’re merely examples of how we would begin building a strategy that uses the inverted hammer.

Having said that, we believe that the following strategy examples will be of great value to you and provide inspiration for your own strategies.

Previously we discussed how you could use volatility to filter out bad trades.

Well, one of the best indicators when it comes to gauging and measuring volatility, is the ADX indicators. It’s really one of those go-to solutions that we try on every strategy, in an attempt to improve performance.

And while it doesn’t work every time, a considerable number of strategies will be improved with this indicator.

Normally, a reading of more than 20 means that the trend is strong. As such, we’ll use that in this strategy.

The length of the ADX indicator we’re using here is 10.

And then we’ll exit the trade after 5 bars. 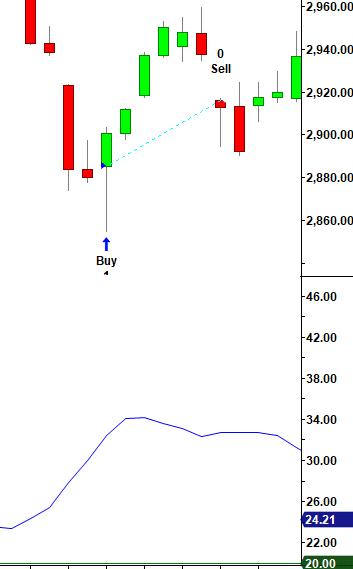 One key concept used by many traders in the equities markets, is mean reversion. In short, it means that the market is likely to revert once it has moved too much in either direction.

Now, we want the inverted hammer to occur after a downtrend, when the market is oversold. And one indicator that does a fantastic job of quantifying this, is the RSI indicator.

We use the RSI a lot in our trading, and it works great. However, we find the default settings to be quite useless, and use our own instead. You can read more about this in our complete guide to the RSI indicator.

To enter a trade, we’ll require that we have an RSI reading of 30 or less. We’ll use the 5- period RSI.

So the rules are that we enter if:

For the exit, we’ll also use the RSI. We exit a trade when we have an RSI reading of 70 or more! 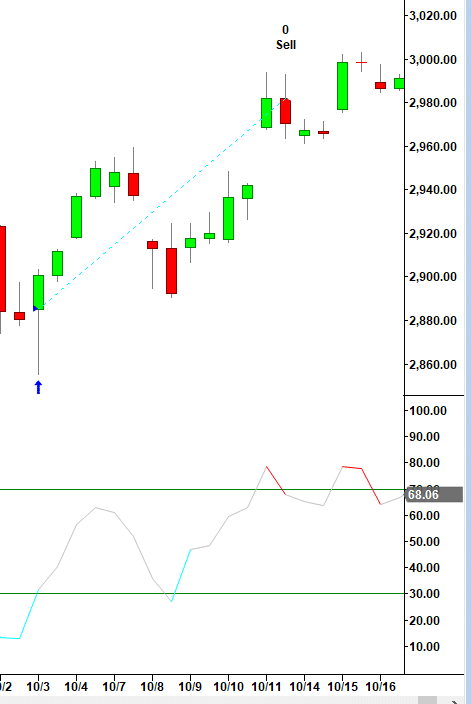 In this article, we’ve had a look at the meaning, uses, and trading strategies of the inverted hammer pattern.

Now, before you trade any pattern or strategy, it’s important to validate the strategy. Most traders don’t do this, and end up as losing traders because of it.

Also, check out our definitive guide to algorithmic trading and swing trading. There we cover a lot of valuable concepts!