Candlestick patterns are some of the most popular technical analysis tools out there, and have gained incredible popularity in late years. One candlestick pattern, which is the topic of this article, is the in neck line.

In neck line is a bearish continuation candlestick pattern that appears in a negative trend, and signals that the market is headed for new lows. It’s made up of a negative candle and is followed by a positive candle, which barely manages to close at or slightly above the close of the previous bar.

In this guide to the in neck line, we’re going to have a closer look at the pattern, and discover what it’s telling us about the market. You’re also going to learn a couple of techniques that we use ourselves to filter out false signals, in order to improve trading performance.

In Neck Line: Definition and Meaning

The in neck line is a bearish continuation candlestick pattern that occurs in a downtrend, and signals that the bearish trend will continue. 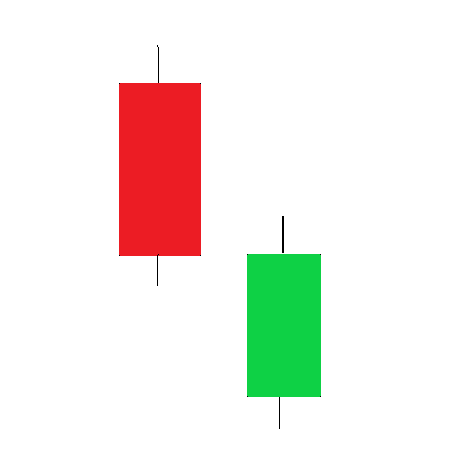 Here is the exact definition of the pattern:

The in neck pattern is very similar to the on-neck pattern and has the exact same meaning. However, the difference lies in that the last candle of an on neck pattern closes slightly below the close of the previous bar.

What Does the In neck Line Tell Us About the Market?

All candlestick patterns tell us something about the market forces that stood behind a market move. And by analyzing patterns in an attempt to understand what forces were at play, we may gain an advantage in the markets.

So, let’s see what the in neck line is telling us about the market!

With the main trend being bearish, market sentiment is also bearish, and most market participants believe in falling prices. This is reflected in the first candle, which closes lower.

However, having gone down quite a lot in a short period of time, some market players now believe that the market has become oversold. Thus, they decide to enter long positions in anticipation of a short term pullback. The increase in buying pressure makes the market go up a bit. However, it never manages to close above the close of the previous bar, which shows that bulls aren’t strong enough to fuel a bigger trend reversal.

Upon realizing this, those who initially went long decide to sell their positions, and before we know it, the market is once again headed towards new lows.

How to Improve the In Neck Line for Live Trading

When most traders learn about a new candlestick pattern, many of them will rush straight to the markets in an attempt to make use of their new found knowledge. However, that is seldom a good idea.

Most candlestick patterns don’t work that well without additional filters or conditions that remove some of the false signals.

So, in this part of the guide, we wanted to share some powerful techniques we’ve developed over the years, which we have used successfully in a lot of our trading strategies.

With most markets, there tends to exist some seasonal effects that make the market more bullish or bearish on a recurring basis.

Now, generally, you use seasonality for longer time periods, like months or even years. However, we’ve found that you could look at much shorter periods to discover useful patterns.

For instance, many markets have certain weekdays that tend to more bullish than others, or even some period of the day that consistently shows above-average returns.

By knowing when these seasonal tendencies or time-based tendencies are in play, we can time our entries better. For instance, if we see an in neck line form as we’re approaching a part of the week that’s extra bearish, we could be a little more certain that the market actually is going to go continue down.

Here are the seasonal and time-based tendencies we’ve had the most success with:

Apart from normal trading indicators that rely solely on price action, there are some other tools that most traders haven’t yet discovered. These are called market sentiment indicators.

Market sentiment indicators give a broader view of the market, measuring things like total up-volume vs down-volume for a whole exchange. That way we get a sense of the overall market condition, which can have a significant impact on the performance of trading strategies.

While the price chart tells us how a security moves, it doesn’t tell us much about the market players that supported the move.

This is where volume comes into play as an extremely useful tool. By adding volume to our analysis, we not only get to see how the market moved but also the conviction behind the move.

In general, one tends to say that high volume makes a move more significant, while little volume means that few market participants stood behind the market action.

To use volume with the in neck line pattern, you could for example demand that the first, negative candle is formed with much less volume than the second bullish candle. This way we see that market participant were much more keen on pushing prices upwards than downwards.

Volume is something that has helped us immensely in a lot of trading strategies. Here are the conditions we use the most:

Here is a real world example of the pattern: 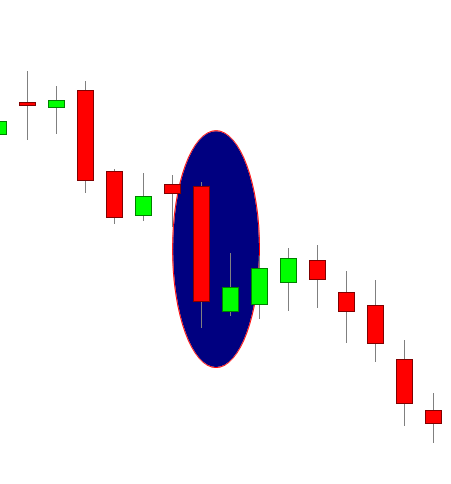 Now that we have had a look at some powerful techniques to rule out bad trades, we wanted to share some trading strategies that rely on the pattern.

With that said, the strategies presented below are not ready to be traded in their current form, but must be applied to the right timeframe and market. We recommend that you use backtesting for this!

With that said, they serve well as inspiration, and should definitely get you started exploring different filters and setups.

So, let’s have a look at them!

One of the most popular trading indicators when it comes to filtering out bad trades, is the ADX indicator.

ADX measures the strength of the trend, and outputs readings between 0 to 100. Readings above 25 signal a strong trend, and readings below 20 signal a weak trend.

When we trade the in neck line, we want to see that the negative momentum is strong. That way we can assume that the bearish forces are capable of pushing the market even further down, and that the bearish trend will persist.

Thus, to take a trade we’ll require that:

Sometimes you want to confirm that the market actually takes off in your anticipated direction, before entering a trade. And that’s what this strategy does!

To enter a trade, we’ll first require that the market forms  the in neck line pattern. Then we’ll add a breakout level, which will be placed at the open of the second bullish candle of the pattern. That way we wait for a confirmation that bears actually are in charge at the moment.

So, the rules to enter a trade are that:

We then wait for 5 bars to exit the trade. 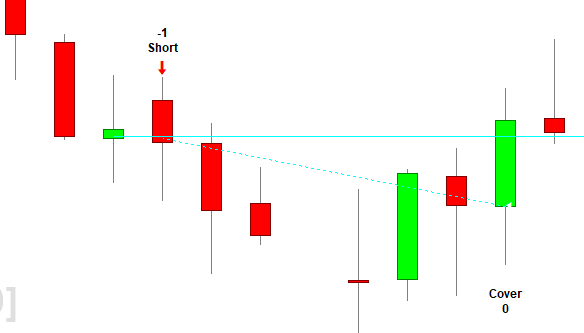 In neck line is a bearish candlestick pattern that forms in an ongoing downtrend, and suggests that the market is headed for new lows.

Just remember that candlestick patterns should never be traded on their own. In most cases, they need to be complemented with other forms of technical analysis to be worth trading!

If you’re interested in learning more about building your own trading strategies, we recommend that you have a closer look at our complete guide to building a trading strategy.