Candlesticks have become the preferred technical analysis tool of many investors and traders, partly due to their easy-to-read and colorful markings, and the fact that they form many different types of chart patterns. One such pattern, which is the topic of this article, is the bullish breakaway.

A bullish breakaway traditionally is considered a bullish reversal pattern that occurs in oversold market conditions. The pattern consists of five bars, with the first one being long and bearish, while the following three remain bearish but are smaller. The last candle then breaks above the high of the three previous candlesticks, which creates a “bullish breakaway”.

This guide to the bullish breakaway pattern is going to cover all the aspects of the pattern that you need to know. We’re going to touch on the definition of the pattern, the psychology behind it, and also provide some example strategies that you could use as inspiration! 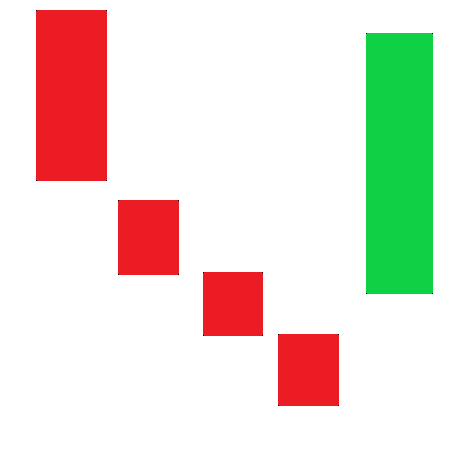 As said, the bullish breakaway is a bullish reversal pattern that typically forms at the end of a bearish trend or price swing. Here is how to identify the pattern:

What Does a Bullish Breakaway Tell Us About the Market?

Since candlestick patterns are representations of market data, which in turn relies on the decisions of the market players, patterns like the bullish breakaway tells us a lot about the prevailing sentiment in the market.

Here is what might have happened as the market forms the pattern:

With the market being in a negative trend, market sentiment is mostly bearish. This is reflected not only in the bearish first bar of the pattern but also in the following negative gap.

The bearish state of the market continues, but now in the form of three smaller, bearish candlesticks. This gives a hint that the bears are losing momentum and that the bearish price swing or trend is losing in strength.

The main sign of a reversal comes with the last, bullish candlestick, which shows that bulls are ready to push through previous bearish price gains. Thus, we hope that the bullish behavior of the market is strong enough to prevail during the coming period as well.

How to Trade the Bullish Breakaway Pattern

Now, what most new traders will do as they learn about a new pattern, is to head straight to the markets to make some money from their new-found knowledge. However, patterns like the bullish breakaway should never be applied on their own but should be combined with other techniques to improve the profitability of a potential signal.

Now, the best way to figure out what types of filters or conditions you should use is with backtesting. That way you know if the filters you choose work well with your market, before you risk any real money. Our article on backtesting covers this in greater detail!

Below we’ll share with you three methods that have helped us in many of the trading strategies we trade ourselves.

For a bullish breakaway to be worth acting on, it should appear in a negative short term trend, or after a price low swing. Put differently, the market should be oversold.

Now, in order to measure when a market is oversold, we could use some trading indicators that serve this purpose. In this article, we won’t cover them all, since it simply would take too much time. Instead, we’ll look closer at our favorite indicator in this category, which is the RSI.

RSI, or relative strength index, is a momentum oscillator that oscillates between 0 and 100, where readings above 70 are signs of an overbought market, while readings below 30 indicate an oversold market.

In other words, you may way want to take a bullish breakaway signal only if the market is showing RSI readings of 30 or lower.

If you’re interested in learning more about the RSI and its applications, we recommend that you read our complete guide to the RSI. 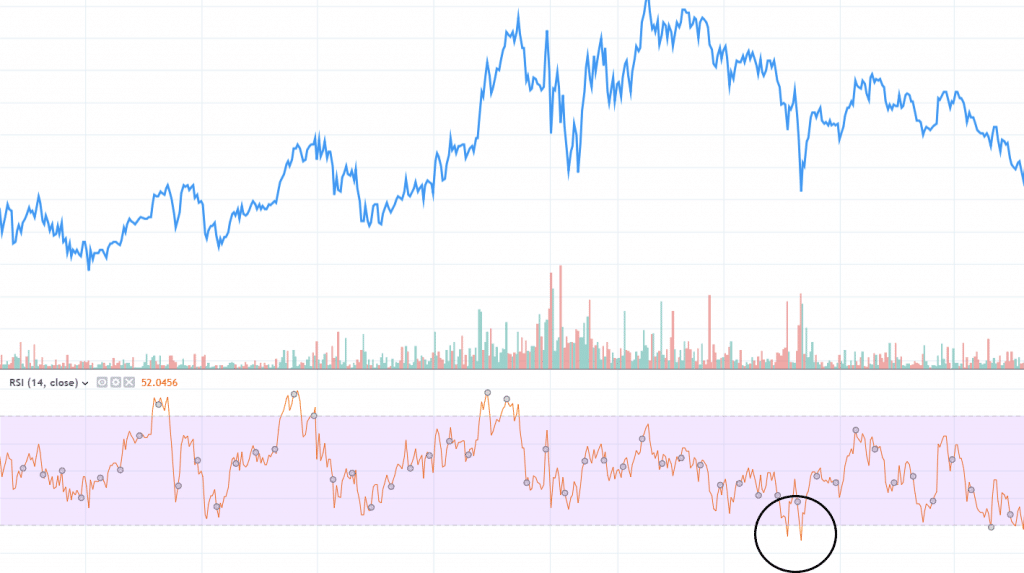 Another sometimes overlooked part of the markets is the trading volume. While price action like candlesticks shows us how the market has moved, it doesn’t show the underlying strength of the market. Volume, to some extent, helps with this and lets us evaluate the number of transactions that stood behind a move.

In the case of the bullish breakaway, you might want to experiment with requiring different volume levels for the different bars of the pattern. For instance, you might want to require that the volume of the last, bullish bar is much higher than the volume of any of the 4 previous bars of the pattern. That way we get a hint that buyers are entering the market with force, and that the chances of a continued positive swing are higher.

Another approach would be to require that the volume gets lower and lower as the four bearish bars are formed. That would signal that the bears are losing in strength, making the final bullish candle more significant and reliable.

If we translate this to the bullish breakaway pattern we might want to decide to only go long if the pattern occurs in what seems to be a temporary pullback in a long term trend. Then we have the long term trend that pushes the market in our direction and makes it more likely that the trade will work out well.

Hopefully, you’ve not got some inspiration for your own trading. These methods have worked well for us, and if you just find the right combination of conditions, they or similar conditions will work for you as well!

Here follows a real-world example of the pattern:

Having covered three ways that you can go about to improve the performance of the bullish breakaway, we’ll now look at a couple of trading strategy examples.

Sometimes we want to ensure that the market move leading down to the pattern was fierce and strong since it often means that we’ll get a quick and fierce reaction.

One of the best indicators to measure the trend strength is the ADX indicator. We use it ourselves, and it serves well in many of our trading strategies.

ADX, which is covered in depth in our ADX guide, compares the momentum of the positive price swings to that of the negative price swings. Readings above 25 are considered to signal a strong trend, while readings below 20 instead signal a weak trend.

In this trading strategy example, we’ll require that the ADX is above 30 to take a signal.  So the rules to go long becomes: 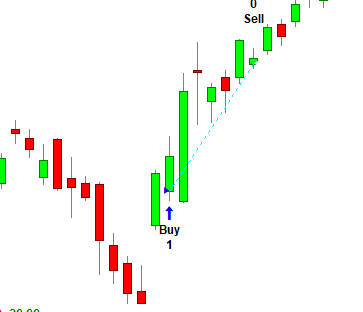 Then we just use a simple time exit to get out of the position after 5 bars.

If you remember, the definition of a bullish breakaway involves two gaps. The first is negative, and appears right after the first candle, while the second one is positive, and occurs right before the final, bullish candle.

By requiring that these gaps should be of certain sizes, we may increase the likelihood that the pattern works out well. For instance, we may require that the last, final gap is bigger than the first bearish gap. This would add to our view that the bullish forces in the market are stronger than the bearish ones.

Thus, the rules of this strategy are:

As before, we’ll just exit after 5 bars.

In this guide to the bullish breakaway pattern, we’ve had a look at the definition of the pattern, how you may go about to improve its performance and some example strategies.

Before ending the article, we just wanted to once again touch on the incredibly important topic of trading strategy validation. Most traders just take some concepts and apply them straight onto the markets, without knowing if their strategy really works.

Such an approach is a recipe for disaster. Most technical analysis doesn’t work very well in its pure form but must be tweaked to suit the market and timeframe you’re working with.

If you want to learn more about how to construct a viable trading strategy that works, we have the following free resources available: